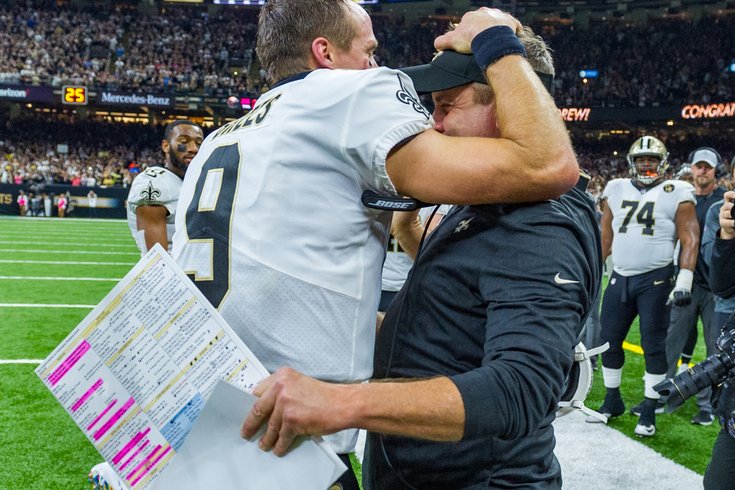 Drew Brees celebrates his passing record by forcing his head coach to smell his armpit, as is the custom.

Week 5 of the NFL season is in the books, and we saw the New York Giants fall to 1-4, so there are no new obituaries this week. The NFC East does not have a single team with a winning record, and the NFC as a whole only has four.

So much for that juggernaut conference most (self included) thought it would be.

14) Giants (1-4): The Giants were strong candidates to be killed off this week after losing on another 60-plus yard field goal on Sunday, but as noted above, because the NFC East has been hot burning garbage so far this season, they live another week.

If you haven't seen the Odell Beckham interview in which he questioned his team's quarterback, coaching staff, heart, and other things, watch it now:

What a self-important child. Beckham JUST signed a five-year, $90 million contract like six weeks ago, and he's already bitching. Unreal. Like, did he really look at this roster when he signed that deal and think, oh yeah, this team is winning it all? Lol.

On Sunday, I had a debate with another reporter on what teams in the NFL had the worst long-term outlook. The only team that I could come up with worse than the Giants was the Oakland Raiders. Buckle up, Odell. It's not getting better anytime soon.

13) Lions (2-3): The Lions were beneficiaries of four Mason Crosby missed field goals (and a PAT), in a game in which they were outgained 521-264. Otherwise, they might be sitting at 1-4. The Lions are Exhibit A on why picking games can be so difficult in the NFL. They've beaten the Packers and Patriots, but have lost to the Jets, 49ers, and Cowboys.

12) Cowboys (2-3): With a little more than five minutes left in overtime, Jason Garrett faced a 4th and 1 at the Texans' 41-yard line. No-brainer go for it situation, especially given that the Cowboys have been successful on 18 of 19 attempts on fourth-and-1 since Ezekiel Elliott's arrival, right? Nope.

And sure enough, the Texans took advantage of Garrett's cowardice, put together a 72-yard drive, kicked a field goal, and sent the Cowboys to 2-3.

Another note: Four of the Cowboys' opponents so far have losing records. They went 2-3 over the easy part of their schedule.

11) Seahawks (2-3): We've only been through five games so far this season, and the Rams pretty much have the NFC West on lock.

Credit the Seahawks for sticking with the Rams on Sunday, but the balance of power in that division has completely flipped.

9) Buccaneers (2-2): The Bucs had a bye Week 5, so they had an extended period of time to think about the 48-10 walloping they took from the Bears Week 4. This isn't a good team. They have great receivers, and a journeyman quarterback who got hot for two weeks. That's it.

8) WASTEAM (2-2): Everyone saw this team get embarrassed Monday night in New Orleans, when they served as little more than WWE jobber on Drew Brees' historic night, as if they were S.D. Jones or Barry O.

This is the current first place team in the NFC East. If the season ended today, they'd have a home playoff game. Gross.

7) Eagles (2-3): The Eagles can't pass protect, they give up huge plays on defense, they commit unforced penalties, and they're consistently losing the turnover battle. Frankly, they're fortunate to be 2-3.

6) Vikings (2-2-1): Facing a 1-3-1 start, give the Vikings credit. They got a huge win in Philly, and made more plays than the Eagles. That was a well-deserved road win, and consecutive games upcoming against the Cardinals and Jets could set them up for a nice winning streak after some early-season adversity.

5) Packers (2-2-1): If there's a player who has not been "given an opportunity to be the very best that he can," it's Aaron Rodgers, not Odell Beckham.

4) Panthers (3-1): I'm torn at times on what this Panthers team is. Without a 63-yard field goal from Graham Gano, Carolina would have lost... at  home... to the trash Giants. The NFC is one 63-yard field goal away from only having three teams with winning records.

Anyway, they just are what they are. They're a good team, I suppose, that doesn't have enough great players to make any real noise in the postseason.

3) Bears (3-1): I think there's an argument to be made that the Bears have the best defense in the NFL.

2) Saints (4-1): Drew Brees broke the NFL all-time passing yardage record last night, at which point he handed the ball to a white glove wearing David Baker, the Pro Football Hall of Fame president. The idea of the white gloves is that Brees will be the last person to ever touch that football.

"No human hand will ever touch that ball again." David Baker of NFL Hall of Fame on #DrewBrees record setting ball pic.twitter.com/BS371eylbI

Holy hell, people, it's only football. Drew Brees is a great quarterback. He isn't a god. If you're a janitor at the Hall of Fame, and you can produce proof that you touched this football with your bare hands (or other), I will send you $100.