Day 2 NFL Combine preview: Wide receivers to watch who could interest the Eagles 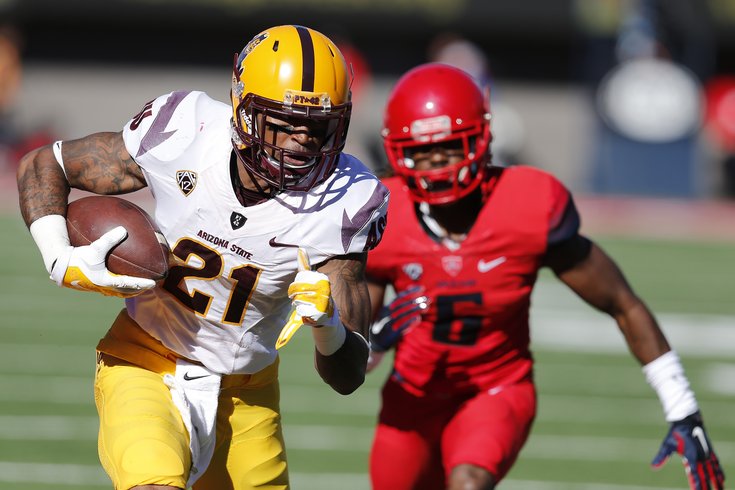 Jaelen Strong is a Philly kid who could interest the Eagles.

The NFL Combine workouts continue today, with three of the more fun positions -- Quarterback, running back, and wide receiver. Here, we'll take a look at the wide receiver position. The 2014 draft was absolutely loooooaded with talent at WR, and while that class will be extremely difficult to match, the 2015 WR class isn't too shabby either. Here are some players to watch today:

• Dres Anderson, WR, Utah (6'1, 187): Anderson has seven receptions of 50+ yards in 2013, but he was injured in 2014, missed the last half of the season, and could not compete at the Senior Bowl. Anderson is a big play guy who is expected to run well at the Combine. Son of former Rams WR Flipper Anderson.

Coates' speed and explosiveness became something of an Internet legend two months ago when one of the Tigers assistant coaches tweeted out pictures of a stopwatch for RB Corey Grant showing a 4.14 time and Coates was 4.16. Those times draw plenty of skepticism when you consider that they're a full tenth of a second faster than anything posted officially at the NFL Combine this year (Kent State’s Dri Archer blazed a 4.26). Still, on a team loaded with stud athletes, Coates does stand out, says Tigers strength coach Ryan Russell.

Asked about Coates' 40-time, Russell said they use hand times (which are often faster than electronic times) and they clocked him eight times, dropped out the highest and lowest and said he was at 4.25. Coates' vertical jump: 44 inches. He benches 405 pounds. Maybe even more impressively, Russell said, the wideout did three strict chin-up reps despite have three 45-pound plates strapped to a weight belt around his waist. "He's just a stud," said Russell. "He really has a ton of God-given ability."

Coates is an obvious player to watch this week.

After the Raiders unexpectedly took Darius Heyward-Bey 7th overall, and the Niners grabbed Michael Crabtree 10th overall, Maclin fell to 19, where the Eagles were able to move up two spot to land him. Could this be a year where a guy like Cooper (or Kevin White below) unexpectedly fall?

• Phillip Dorsett, WR, Miami (5'10, 185): Dorsett is a candidate to run the fastest 40 time at the Combine this year, and the Eagles spoke with him at the Senior Bowl.

• Devin Funchess, WR/TE, Michigan (6'4, 232): Funchess is working out at wide receiver at the Combine, and I agree that Funchess would likely play there in the Eagles' scheme. Other teams may view him as a tight end, where he got some experience at Michigan. His production wasn't great, but he could be a versatile red zone threat and mismatch creator.

• Antwan Goodley, WR, Baylor (5'10, 209): Goodley is built more like a running back than a wide receiver, and he is someone who has been covered here multiple times this offseason:

According to the Baylor Lariat, he can squat 660 pounds, which is ridiculous for a WR. He is built more like a bruising RB than a WR, and that added bulk shows on tape. He is basically like a stronger, faster, thicker version of Josh Huff. The Eagles have a history under Chip Kelly of bringing in thicker WRs, like Arrelious Benn and Huff. The question is whether or not the Eagles are going to be "collectors" of this type of WR, or if they just want one and they found their guy in Huff.

This is a freak of nature who could capitalize in a big way at the Combine.

• Rashad Greene, WR, Florida State (5'11, 182): Greene decided not to participate at the Senior Bowl, which is a huge turn-off, but he owns a slew of Florida State receiving records at a school that has produced a boatload of talented receivers.

• DeAndre Smelter, WR, Georgia Tech (6'2, 226): Smelter won't work out because he tore his ACL, but he has great size and enormous 11 inch hands. He also has a diverse athletic background, which includes baseball.