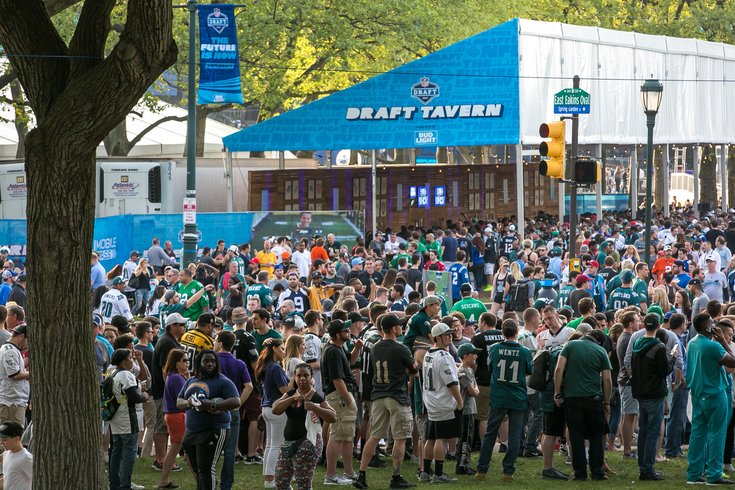 Thousands were in attendance at the 2017 NFL Draft on the Benjamin Franklin Parkway in Philadelphia.

Philly has survived day one of the NFL draft's invasion of the Benjamin Franklin Parkway. The highly anticipated event was met with a mixed bag of reactions by locals before Thursday. Some thought it was a reminder that we're a world-class city; some skipped town and decried the city being put on "lockdown."

Well, I went, and my verdict is ... appropriately, mixed. At times, I was awestruck — much like when Pope Francis visited — by the massive crowds of people and the majestic quality of the Parkway free of cars and full of life. There were also moments where I thought, "What the hell am I doing here?" It wasn't a bust; it wasn't the best.

Here are the good, bad and perfectly weird parts of the NFL draft experience in Philly:

• Crowd flow: Unlike for the annual Fourth of July concert and the 2015 papal visit, people weren't camping out as far back as City Hall. Sure, the crowd filled up by the time of the first pick, but for the number of people who were there, it was surprisingly easy to move around. Up until 6:30 p.m., only an hour and a half from start time, you could catch a glimpse of the stage from relatively close up. 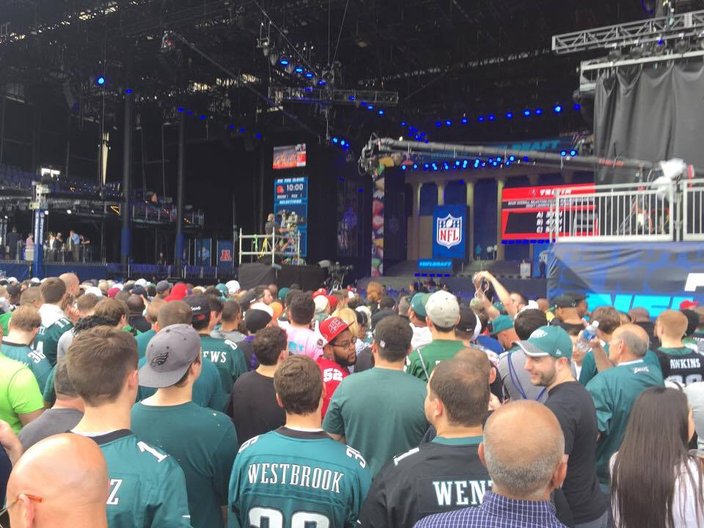 The NFL draft stage on the Benjamin Franklin Parkway.

• Fan diversity: Despite our unfair portrayal by many, most Eagles fans can be pretty friendly. And if you genuinely like to talk about football (and not just scream), there's really no other place where you can mingle with fans of essentially every different team. Games are tense and argumentative, but at the draft, most are on a relatively mellow wavelength. Within the first hour or so, I got to talk with a Ravens fan, a Steelers fan and, yes, even a perfectly nice Dallas fan! Sports are an excuse to start conversations, and the draft is a gold mine.

• The left side of the Parkway: Most of the main attractions, like the shop, Lombardi trophy and games, were to the center and the right, which means they were crowded (more on that later). But along the left side of the Parkway were relatively unnoticed attractions that were easy to mosey through. Those included an artist who made paintings using each team's colors, some selfie-ready college football mannequins and an exhibit featuring jerseys of each team. 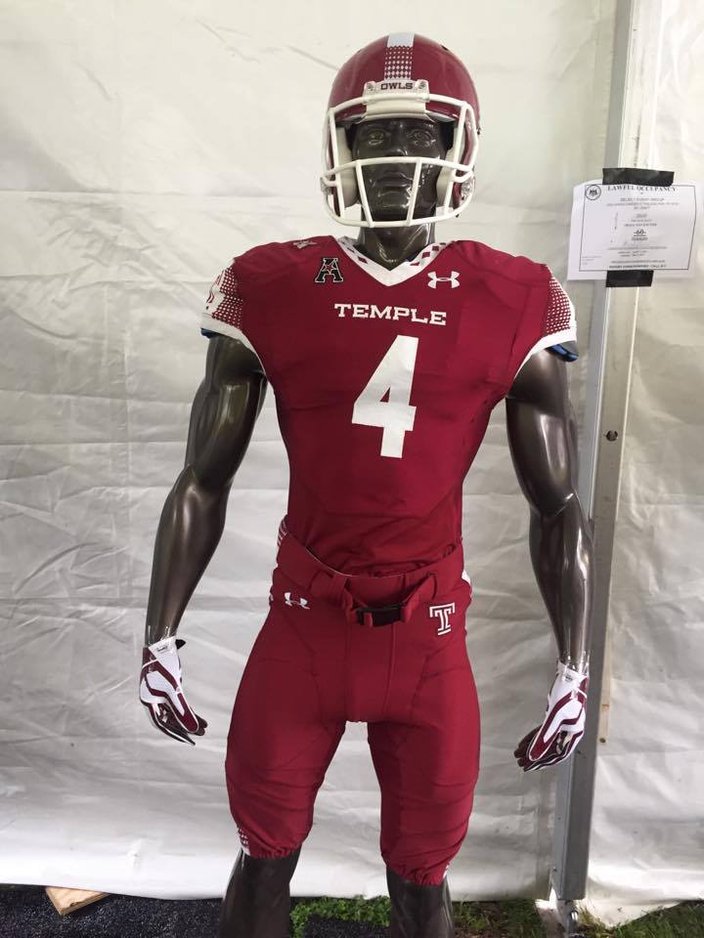 A decent selfie opportunity for fellow Temple Owls at the NFL draft in Philly.

• Skittles: There was a tent that gave out free Skittles. I ate many Skittles.

• Lines: This is a given for an event like this, I know. But unless you have off the whole day — considering the first two days of the three-day event are on Thursday and Friday, most don't — trying to participate in just one of the free activities probably means waiting a half hour, at least. It would be different if it were a Friday through Sunday affair, but it's not. So assuming you get off work at 5, get in by 6:30 and want to watch the draft at 8 p.m. (7 p.m. for Friday), there's not a lot of time to actually experience the "experience" part.

• The NFL Museum: One of the things that didn't have a line was the NFL Museum, and for good reason. I was genuinely excited to see some football history, but what the open-air tent amounted to was a handful of vintage jerseys, some "exhibits" that were actually videos and sponsors handing out crappy stuff. In all fairness, my hopes probably shouldn't have been so high.

• Beer: $12 for a 24-ounce beer isn't actually that bad when you do the math, but the problem with beers that big is unless you're essentially chugging, it gets warm and gross about halfway through, especially when you're outside and walking around. I would have rather paid $6.50 a pop for two 12-ounce beers I could actually enjoy. The options, via the official beer sponsor, were Michelob Ultra, Shock Top, Budweiser and Bud Light. So, meh.

• Fertilizer: There was a decent amount — fresh — by the stage, and it smelled like poop.

The Perfectly Weird (with some help from the internet)

• The Eagles fan who was just happy we made a pick: This video is priceless.

Low bar in Philly on draft day. Fan "just happy they made a pick" pic.twitter.com/oazqguiSIR

• The Cowboys ass: This was sort of inevitable.

My pick for the 2017 draft is pic.twitter.com/LWOTHBUBcQ 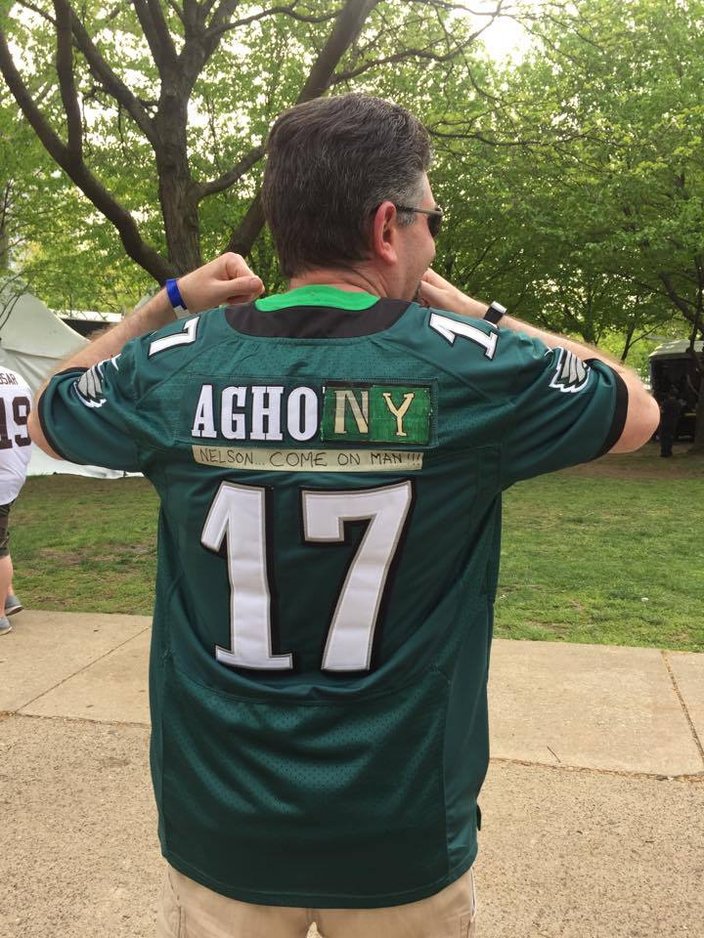