Two years ago, Hills was out of football and working as a security guard. Next week, after surviving a car crash, he could hear his name called at the NFL Draft. 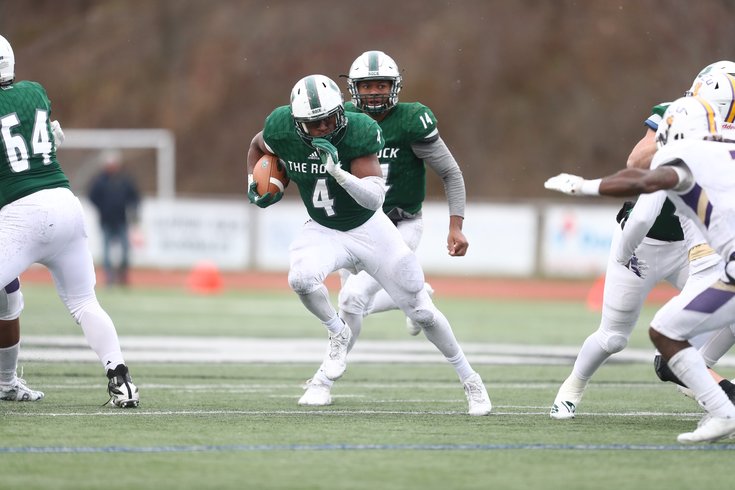 Slippery Rock running back Wes Hills has drawn interest from the Eagles.

When Wes Hills found himself trapped in a steel prison, the first thought was to get out. One shoulder thrust was followed by another through the jammed driver’s side door. Once free, he didn’t even look down at what was once his supped-up 2001 black Hyundai Sonata, now a steaming, twisted pile of metal sitting somewhere in the Slippery Rock, Pa. woods after the car hydroplaned and spun off the road.

Hills climbed his way out of the car, touched ground and then slowly sank to his knees in the damp mud, bowed his head and said a prayer — grateful he was still alive.

Sometime next weekend, hopefully, the bruising 6-foot-2, 218-pound running back prospect out of Slippery Rock, by way of Wildwood High School, will sink his knees into the carpet of his South Jersey home, grateful to be called by an NFL team that's selected him in the NFL Draft or invited him to their training camp as a priority undrafted free agent.

Either way, it appears the curvy odyssey Hills, a 2013 Wildwood grad, has taken will continue on to the NFL.

It’s a long way from a slick road back on an early-August morning, when for a brief time, Hills’ journey may have tragically derailed in the Western Pennsylvania woods going nowhere.

“My dream is to play in the NFL. I’m lucky to be alive after surviving that car accident. I can say that night changed my life. You realize everything you have and just like that, in a blink, everything you can lose. Not too many people know that story of the accident.

“I was going back home to Wildwood from Slippery Rock, and I just remember an animal darting out from the woods and swerving away and the car spun out of control. I wound up in the woods. It was scary. At that moment, my resolve was stronger. Tomorrow is never promised — I found that out. I got out of that car and I decided that I was always going to take advantage of today.”

Last autumn, he torched the Slippery Rock record book by rushing for a single-season school-record 1,714 yards (on 246 carries, 7.0 average). He caught 28 passes for 193 yards (6.9 average), and went on be a second-team Division II Associated Press All-American. He led the rock to the Division II quarterfinals, then gained more national acclaim when he was named MVP in the eighth annual NFLPA Collegiate Bowl at Rose Bowl Stadium, rushing for 78 yards and a touchdown.

That performance raised the eyebrows of the Senior Bowl committee, which invited him to play in that game with major Division I prospects.

Hills, who will turn 24 on June 5, was hardly recruited out of Wildwood, despite rushing for 2,106 yards and scoring 35 touchdowns during the 2012 season. Hills made a trip to Towson and didn’t like it. He wound up calling Delaware and initially committed to K.C. Keeler, who was fired. Dave Brock took over from 2013-16, and he, too, was fired giving way to interim coach Dennis Dottin-Carter, then current Blue Hens’ coach Danny Rocco.

In his time at Delaware, Hills played in 32 career games, starting in six, and rushed 286 times for 1,849 yards (6.5 average) and 14 touchdowns. He also caught 10 passes for 67 yards, recorded 16 tackles, and returned four kickoffs for a 36.7-yard average, and even blocked a punt on special teams. He missed the 2015 season with a foot injury and 2017 due to academic troubles. Though at Delaware, his 1,849 yards rushing ranked No. 19 on the all-time Delaware career rushing yardage list and his 6.46 career rushing average per carry ranks No. 6 all-time.

Any NFL team who gets Wes, they’re going to get a worker who likes to punish people when he gets the ball. I love his violence when he has the ball.

After 2017, Hills eligibility ran out. He wasn’t, however, through with football — at least not on his terms. He took off in 2017, working security at Summit Academy from 10:30 p.m. to 7:30 a.m., then would work out, catch a few hours of sleep and go back to the same routine. There were times Hills fell asleep in his car in the gym parking lot.

“I had to give it one more shot, but to be honest, the NFL was not even a consideration,” Hills recalled. “A lot of people always doubted my abilities, even back in high school. I wanted to showcase what I could do and I just didn’t want to go out that way at Delaware.”

Slippery Rock coach Shawn Lutz received a call from a Slippery Rock graduate who happened to be an NFL scout. He told Lutz that Hills could use another year and that he graded out to be a sixth- or seventh-round draft pick after his junior year. The problem was Hills never went through a season without getting nicked up and slowed by injuries.

Lutz was willing to take the chance on Hills, and Hills on Lutz and Slippery Rock.

“The biggest compliment I can give Wes Hills is that he came here one year, and this team voted him team captain,” Lutz said. “That’s because everything Wes does is with a relentless attitude and he has an intense work ethic. Wes can block and he’s great at catching the ball on third downs. That’s what made him so attractive at the all-star games.

“Anytime you’re out of football, and he was off for a year, you get rusty. By our sixth game, against nationally ranked Indiana of Pennsylvania, Wes singlehandedly broke tackles left and right. I can’t remember a time anyone tackled Wes behind the line of scrimmage. He just better and better from there. 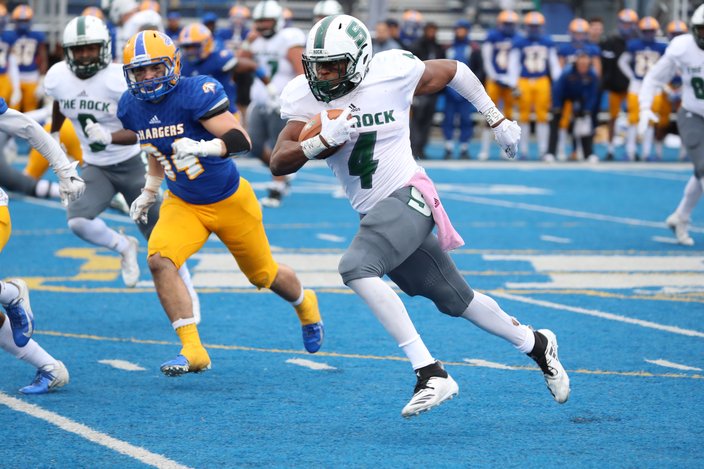 Every NFL team has contacted Lutz about Hills. But recently, the Eagles, Steelers, Chargers, and Jets — and very recently the Patriots — have been in touch again with Lutz.

“I don’t think there is much doubt in my mind Wes is going to be in someone’s camp this summer,” said NFL Hall of Fame writer Ray Didinger, the NBC Philadelphia Sports NFL analyst and one of the most respected voices in the game today. “What I really like about him is that he’s a really physical runner and his size is almost ideal, a shade over 6-feet and 220 pounds.

“He runs better than people think and he has good vision. The great question is the level of competition that he played. Slippery Rock is not Alabama, but if a guy can run, he can run. He was certainly dominant at Slippery Rock. He’s one of my sleepers. It wouldn’t shock me if he’s a day three pick for somebody, and if he’s not, when the draft finishes, he’s going to have a bunch of teams calling him trying to get him to go to their camp as a free agent.

“If you were to ask me right now, I would say Hills will get drafted, but later in day three. It makes sense the Eagles would be interested in him. Jordan Howard was a great pick up, but they’re still light there. They need to get one more guy and I would certainly expect Wes to be on their radar. I think Wes has a lot going for him. I think he has NFL skills. What’s important is that he finds the right situation. I think he can play in the NFL.

“Someone will come knocking for Wes that’s for sure.”

Hills, who is two classes short of getting his Bachelor’s degree in criminal justice, will fill next weekend up in Wildwood playing with his niece and nephew. The NLFPA is flying Hills out to Nashville, Tenn., where the draft is being held from April 23-25, but will fly back home on Thursday, the day of draft.

“It means a lot to hear your name called and that you’ve been drafted in the NFL,” said Hills, who’s had the Eagles, Falcons, 49ers, Giants, Ravens, Rams and Chargers personally contact him. “The Eagles are right there. It would be the dream of my family to see me wearing an Eagles’ uniform. I grew up a Mike Vick fan. I always wanted to be a quarterback. I just found out something—I couldn’t throw.

“I’ll keep my mind on my phone when it rings. I’m not going to try and stress over it. All I need is an opportunity. That’s all I ask.”