NFL trade rumors: Eagles looking to move into the top 10 of NFL Draft? 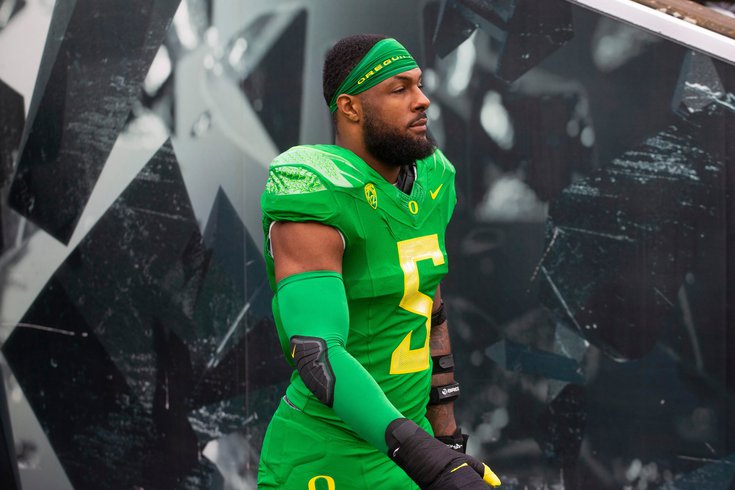 The NFL draft is on every Eagles fan's mind. As the night approaches, rumors are flying everywhere. I love the chaos!

There is a new juicy nugget courtesy of NFL Network's James Palmer: the Eagles might be looking to moving up into top 10 of the draft:

The latest from Philly and the #eagles. A move into the top 10? It’s a very real possibility. What positions would Howie Roseman be looking at? My #NFLDraft report on @nflnetwork pic.twitter.com/E9rlHzDiaw

Here's an excerpt of what Palmer had to say:

I was making some phone calls this morning and really the belief is that Howie Roseman really is trying to see if he can trade up with that first pick of his two in the first round. Now, making some more calls, it even sounds like he's trying to get into the top 10 if that's possible....

The name that keeps coming up is Kayvon Thibodeaux out of Oregon. He is a freak on film. He is a guy that could change the pass rush in Philadelphia immediately. They ranked 31st in sacks, so that is a definite need for them if they can find a guy that can make an impact right away and they believe that Thibodeaux can be one of those types of players.

Palmer also mentions the idea that the Eagles are hoping to trade back from the 18th pick with a QB-needy team and recoup some extra draft capital.

I wrote on Tuesday that the Eagles should try to make reasonable jumps in the first round for three players: Thibodeaux, Georgia defensive tackle Jordan Davis and Notre Dame safety Kyle Hamilton.

This was my rationale for moving up for Thibodeaux:

Thibodeaux came into the offseason as a likely candidate for the first-overall pick in the whole dang draft. What happened? He's sliding due to "character concerns." I obviously can't speak exactly to what those are. I'm weary of character concerns when it comes to guys like Deshaun Watson and Tyreek Hill. I'm not worried if a guy is just kind of a pain in the ass, as long as he's legit good. Thibodeaux sure is.

NFL Network's Mike Garafolo believes Thibodeaux is going to slide past the fourth pick. If a prospect is falling from being in top pick conversation to the back half of the top 10 without suffering an injury or even stepping on the field, I'm not buying the reasoning. I've said it a lot during the pre-draft process: talent is talent. Thibodeaux is a monster:

The Eagles build through the defensive line. It's the most drafted first round position for the Birds in the Howie Roseman era. The organization traded up in the first round to land Fletcher Cox in 2012. They won't regret doing so for Thibodeaux 10 years later, picking up a potential All-Pro player in the process.

Eagles get: Round 1, Pick 7 (Kayvon Thibodeaux)

I'm expecting some fireworks from the Birds tonight. It feels like there's more pre-draft smoke with the team than I can ever remember. Between the draft and the Sixers' Game 6 matchup with the Raptors, it's going to be one heck of a night for Philadelphians.

There is more smoke about the Eagles looking to trade up. Sports Illustrated's Albert Breer wrote the following on Thursday afternoon:

All of that said, there are still way more teams looking to come up than move down. The two that seem to have done the most significant groundwork on dealing up, as far as I can tell, are the Eagles and Chiefs. I could see Philly moving up into the middle of the top 10, maybe for a corner, maybe for a pass rusher, maybe for a receiver. I could see Kansas City making a jump, too, but maybe for a corner—with a receiver like Georgia’s George Pickens being in play with the first-rounder they don’t wind up moving.

Does all that smoke mean there's a fire brewing? Roseman is ready to make a splash.

More chatter about the Birds moving up in the draft!

Breer, who wrote that above article, followed up on his report on Twitter:

Two notes on the teams trading up …

1) Rival clubs believe an Eagles move up into the Top 10 would be for a corner.

2) The Chiefs are looking at a measured move up if the right players slip. They’ve told teams in the Top 15 they don’t want to pay the premium for a bigger move. https://t.co/dV0WqMHsmQ

The Eagles certainly could be eyeing a corner. There was buzz that they were in on Alabama CB Patrick Surtain II in the 2021 NFL Draft before Denver selected him ahead of the Birds. Perhaps I'm wrong, but I don't necessarily buy that the Eagles would do a significant jump into the top seven or so for a corner. It just doesn't fit the organization's philosophy that has been in place for over two decades.

I'd lean towards such a move being for a defensive lineman, but, hey, who knows when it comes to Roseman and his propensity for wheelin' and dealin'.