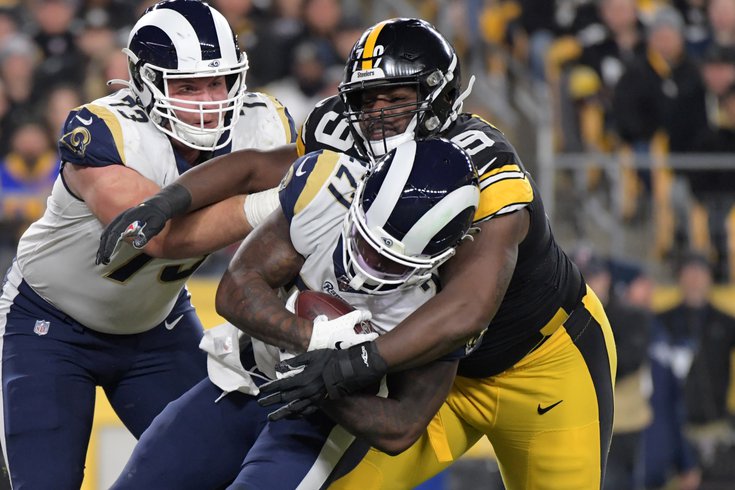 He's called "gravedigger" — although he might have to fight Lane Johnson for that title in the Eagles locker room — and according to experts and NFL pundits all across the football world, Javon Hargrave's surprise signing, to a three-year, $39-million deal that made him the highest paid nose tackle in history, may have been a really underrated move to help keep the Eagles defensive line as one of the best units in football.

Or it may have been a waste of money on an area that is already a strength for the Birds while the team avoids addressing true areas of need: wide receiver and cornerback.

With so much news percolating in from all corners of the NFL, lets pause for a few minutes and see what they're saying about Hargrave and the Eagles:

A trio of Eagles writers at The Athletic gave different grades to the Hargrave signing, with Sheil Kapadia giving the move a C+, Bo Wulf giving it a B+ and Zach Berman a B. We will split the difference here, and take a look at what Berman had to say about the move:

It always makes sense to invest in the defensive line, and there’s more time, money and draft picks to fix other spots, but resource allocation matters when resources are finite. If Hargrave is the Eagles’ big-ticket addition, then they need to be creative in filling other spots. It’s too early to make a full evaluation of their free agency until it’s clear what else they do and to assess how else they could have spent the money. Hargrave can help this season and beyond. But there’s still much work ahead of them, and they have gaping holes after Day 1 of the tampering period. Grade: B  [The Athletic]

It seems an understandable sentiment that the final (offseason) grade on this move will depend on what comes next.

The signing of Hargrave gives the Eagles some serious depth now at a position of strength, but does the money make sense? Andrew Kulp gave the signing a C grade. Here's a snippet of why, and a brief look at the financial impact of the move:

Granted, Cox and Jackson both have the ability to line up on the outside situationally. That means there's more snaps to spread between the trio. It also lessens the demand for another defensive end to rotate in with Brandon Graham, Derek Barnett and Josh Sweat.

The structure of Hargrave's contract seems relevant here, too. Cox will be 30 next year and count for $22 million against the cap. Jackson will be 31 with a $13 million cap hit. Moving on from either player's contract early would be costly, but it's something the Eagles should anticipate is possible, especially given the injury histories here.  [NBC Sports Philly]

Another voice at NBC Sports, Dave Zangaro, seems to have tapped into Howie Roseman's thinking in making this deal. Here are the two main reasons why he believes the Eagles' GM brought in the former Steeler:

But when you think about it, this move is far less surprising than it first seemed.

1. Howie Roseman told us he wanted to get younger. And he told us he wanted to get back to free agent signings like the ones he pulled off in 2016, when he signed Brandon Brooks and Rodney McLeod — young players coming off their rookie deals — instead of rentals. Well, Hargrave is 27 and is four years into a career in which he’s missed just one game.

Think about a defensive line that will have Cox, Hargrave, Malik Jackson, Brandon Graham and Derek Barnett. My guess is that Jackson’s versatility is what will make this work. The Eagles have three of the top six highest-paid 4-3 defensive tackles in the league, but Jackson (if healthy) will be able to play defensive end quite a bit. And even Cox can slide outside for a different look on occasion.  [NBC Sports Philly]

Not solving the problem

The four writers who help cover the Eagles gave their takes on the move at Inquirer.com, with EJ Smith, Paul Domowitch, and Jeff McLane all giving the signing a thumbs up 👍 emoji (yeah, letter grades are a thing of the past it seems, bring on the emoji ratings). One writer, Les Bowen, gave a no-change emoji ↔️ to the move, as he thinks it does nothing to make the Eagles better by addressing weaknesses from a season ago.

But maybe I’m missing something. The Eagles weren’t 9-7 because they were missing Malik Jackson, despite what Howie Roseman said at the end of the season. They were 9-7 mostly because their wide receiving corps was a disgrace, their linebackers weren’t real good, they waited too long to fully utilize Miles Sanders, and for the umpteenth season in a row, they had below-average cornerbacks.

Oh, and at safety, once a gaping hole that has been capably filled by Malcolm Jenkins and Rodney McLeod in recent years, they seem to be on the verge of parting with both of those guys, despite having no backups who look like top-quality starters.

So they’re devoting $13 million a year to another defensive tackle.  [Philadelphia Inquirer]

And finally, a breakdown of the Xs and Os. At Bleeding Green Nation, Benjamin Solak did some homework and took a look at exactly what kind of player the Eagles are adding to Jim Schwartz' defense. Here's a little piece of his analysis:

Hargrave is a shorter player, a stubbier player, with a ton of natural leverage and sand in his pants. He’s not going to beat anybody off the ball at the snap.

But he doesn’t have to always win the first step to win in a one-gapping role. He initiates contact, has excellent lateral quickness, good power once engaged, and can finishes rushes with surprising bend. Hargrave represents more of a Timmy Jerningan body type, but is a better player than Jernigan, and in that he’s a of a different mold as compared to Cox and Jackson, won’t have similar weaknesses. He won’t lose to double-teams, get stymied by powerful guards in one-on-one situations.

Hargrave is a dang good football player, and even if he doesn’t look like the Eagles’ defensive tackles we’ve come to expect, his bowling ball frame and immovable anchor still win in the role the Eagles will ask him to fill. If Hargrave continues to excel as a technical pass rusher from tilted and shaded alignments, he’ll contribute to the defense on all down and distances, and give the Eagles a more balanced rotation of interior rushers to keep their stable fresh for playoff runs.  [Bleeding Green Nation]