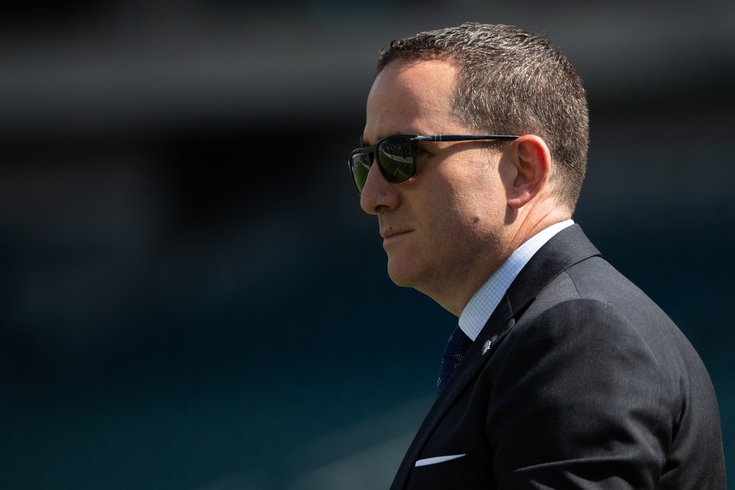 UPDATE [4:28 p.m.] — The news just won't stop. Shortly after announcing that they're not picking up Malcolm Jenkins' 2020 option, the Eagles struck a two-year deal with his defensive backfield partner, Rodney McLeod.

Roster Move: #Eagles have agreed to terms with S Rodney McLeod on a two-year contract. pic.twitter.com/cTAiRiJ7sD

With McLeod, 29, back in the fold and Jalen Mills said to be moving to safety, it appears the back end of Jim Schwartz' defense is set for 2020. Did they keep the wrong safety by going with McLeod over Jenkins? We'll find out. But one thing is for sure — McLeod came with a much cheaper price tag than the one Jenkins was seeking in his new deal.

UPDATE [4:10 p.m.] — It's been a pretty busy 90 minutes for the Eagles. First, the team announced that it had re-signed Jalen Mills with the intention of moving him to safety. Initially, that seemed like it might spell the end for their interest in Will Parks — or that they were going to let Rodney McLeod walk in free agency — but then the other shoe dropped.

The Eagles announced that they declined the 2020 option on Malcolm Jenkins' contract, making him a free agent. While he's 33 years old and was looking for a new deal this offseason, that move is likely going to hurt the Eagles both on and off the field, as Jenkins was not only a leader in the locker room, but also played nearly every snap (including special teams) for the Eagles since his arrival in 2014.

The Eagles also reportedly lost running back Jordan Howard and linebacker Kamu Grugier-Hill, both of whom look set to join the Miami Dolphins.

UPDATE [2:40 p.m.] — It appears Jalen Mills will be back in Philly for another season with the Eagles, only he'll reportedly be playing a new position in 2020.

No word yet on what that means for the status of free agent Rodney McLeod, or defensive leader Malcolm Jenkins, who has already publicly stated that he wants a new contract before camp starts. It's also unclear if this takes the Eagles out of the running for Broncos safety Will Parks (more below).

Jimmy Kempski will have more on Mills soon.

UPDATE [2:27 p.m.] — Well, you can take another potential Eagles target off the board, as reports continue to role in that the Raiders have signed former Rams linebacker Corey Littleton.

Former #Rams LB Cory Littleton has an agreement to join the #Raiders, source said, on a 3-year deal worth up to $36M. It has a base value of $11.75M per year.

Our own Jimmy Kempski liked Littleton as an option for the Eagles, who have already let Nigel Bradham go and, it appears, will also lose Kamu Grugier-Hill to free agency this offseason, as he will reportedly sign with the Dolphins.

Also, @JimmyKempski had this to say about potential Eagles LB target Cory Littleton.

“He’s an awesome player. And I have reason to believe Howie very much likes him.”

Now, it appears, Howie Roseman and Co. will have to shift their attention elsewhere.

UPDATE [12:35 p.m.] — The Eagles are definitely in the market for defensive backs this offseason, and a Philly native could be on their list as the Birds are reportedly interest in Broncos safety Will Parks, who graduated from Germantown High School.

Teams looking for secondary help have shown interest in #Broncos @PhillyWill11. He brings unique talent, versatility that has clubs like #Lions, #Eagles, #Texans, #Raiders checking in. Will be shocked if Parks doesn't land strong deal w a chance to start. He's earned it. #Denver7 pic.twitter.com/Id5dygGhPZ

Parks started 15 games for the Broncos over the last three seasons, and has played cornerback in the past, proving he has the kind of versatility Jim Schwartz covets in his DBs.

We've previously covered Parks here at PhillyVoice, both when he was first drafted by the Broncos and when he returned home last year to speak out about gun violence in the city after his uncle was fatally shot while waiting for a SEPTA bus.

There was also some bigger news from around the NFL breaking around the same time, as the Panthers first granted Cam Newton the right to seek a trade — something Cam made sure people knew wasn't his idea — and followed that up by agreeing on terms to make Teddy Bridgewater their new starting QB.

The #Panthers are finalizing a deal with QB Teddy Bridgewater to be their starting QB, sources say. New OC Joe Brady gets a new QB in Teddy B. There is a basic agreement.

The NFL QB carousel continues to spin, although one passer who won't be changing teams is Drew Brees, who re-signed with the Saints on Tuesday.

The NFL world woke up to a shock on Tuesday morning, as Tom Brady announced that he is leaving the New England Patriots after 20 seasons to play elsewhere.

BREAKING: Tom Brady announces he will not return to Patriots. pic.twitter.com/TX8zWhD4gS

There's also a report out there that Brady and the Patriots never even entered negotiations, which is certainly an interesting angle to this. However, it never seemed to make any sense that cold, calculated businessman Bill Belichick would throw big money at a 43-year-old quarterback who is clearly in decline.

According to @tomecurran, “a tangible effort” from the Patriots to keep TB12 never happened, and there was “no negotiation.” pic.twitter.com/fAGKNYOyj8

Of course, that all depends on who you ask...

Robert Kraft told me "if Tom wanted to remain a Patriot, we would have had a deal." Said Brady believes it was best to turn the page and start a new chapter of his life in football and beyond. #Patriots @nflnetwork

While it's clear that Brady won't be returning to New England next season, it remains unknown where he'll wind up for next season — and how long he plans on staying.

Despite today’s proclamation that he would not be returning to New England, Tom Brady has not made a decision on where he will play next season and he will be exploring his options, per a league source.

One option that seems to make sense for Brady is Tampa Bay, which appears ready to move on from QB Jameis Winston. In fact, a day before Brady's decision to leave the Patriots was even made known, some sports books moved the odds considerably on where he'll play next season, with the Bucs suddenly overtaking the Pats as his most-likely destination.

The Tampa Bay Buccaneers are now the betting favorite to sign Tom Brady.

Those odds were updated again on Tuesday after Brady's announcement, with the Chargers making a surge into second place, followed by the NFC champion 49ers and the Colts.

Updated odds for what team Tom Brady will be on for Week 1 of the 2020 season (BetOnline):

Wherever Brady signs, there's a good chance that the team will be built around him in order to maximize the limited window left on his career. With so many of the available wideouts off the board, it wouldn't be shocking if Brady reunited with Antonio Brown, assuming he gets reinstated by the league.

Where (and when) Brady will sign his next contract remains to be seen, but one thing is for sure, the rumors are only going to pick up steam in the next 24 hours — if his free agency even lasts that long. There's also the question of who will replace him as the Patriots quarterback:

In the meantime, stay locked right here for all the latest rumors and news surrounding one of the busiest times of the NFL calendar: the start of free agency.