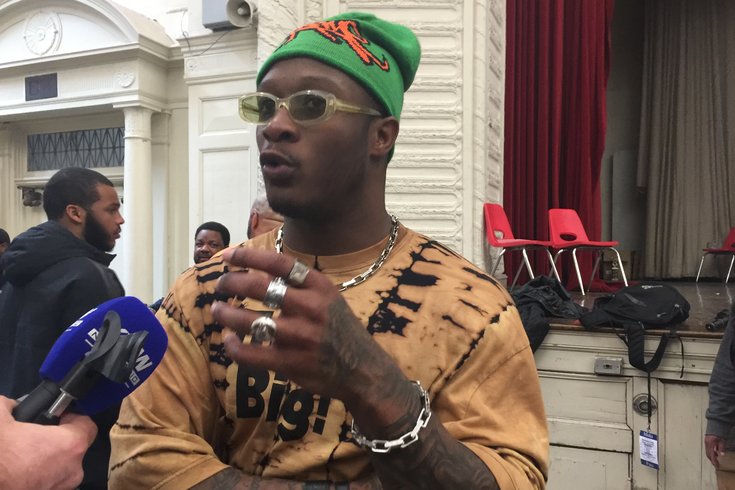 After losing his uncle in a Hunting Park shooting in August 2018, Will Parks has teamed up with Philadelphia Ceasefire to inspire youths to work toward a better life.

When Will Parks was growing up near 2nd Street and Allegheny Avenue, he was a kid who – like so many others across the country – dreamed of playing in the National Football League.

That goal, and committing to the hard work necessary to make it a reality, brought him to Germantown High School, where he was a standout cornerback, wide receiver, kick returner and leader whose coach openly drew comparisons to pro-level talent.

It would take him to the University of Arizona, where by the end of his four-year run he’d garner consideration for the College Defensive Player of the Year Award, and to a hotel near the Philadelphia International Airport where, in 2016, he learned that the Denver Broncos had selected him in the sixth round of the NFL Draft.

To hear his mother Nyerere Parks tell it, there was a single moment in 2011 that helps explain why he was back in Philadelphia last week speaking to students at two high schools in an effort to convince them that they, too, can achieve greatness.

“It’s always a great feeling anytime you can come back and talk to kids and reach out. You never know, it might change their life, just meeting somebody,” he said before telling me that he was well aware of Parks’ skills, noting that he hoped the youngster would “keep working hard.”

“Hopefully, I’ll see him (in the NFL) in five or six years,” said Rodgers-Cromartie who would be able to do just that.

“Oh, that [2011 meeting] definitely had an impact on him,” she said at Simon Gratz High School while sporting both a Denver Broncos T-shirt and a smile befitting a mother whose son’s hard work continues to pay off. “The whole pep rally thing. It was so loud. The electricity in the room. He always knew he wanted to give back in that same fashion. I was excited, too. I remember it to this day.”

'TRYING TO CHANGE THE WORLD'

The Broncos won the Super Bowl the season before drafting Parks, who now plays safety for the team. They haven’t been back since, but Parks hopes that’s about to change as he enters his fourth season – the contract year – in the league.

On the precipice of a contract that would allow Parks to set up his family for life, the 24-year-old didn’t go to Gratz and Martin Luther King high schools on Friday to brag about that.

Sure, he’d have preferred to go back to his alma mater, but a year after he graduated, the Philadelphia School District shuttered the sprawling Germantown Avenue school.

“Maybe that’s just a message that I need to visit all the schools instead,” he said. “I always said that if I was in a position to give back, I would do it. We’re just trying to change the world.”

In this case, changing the world meant teaming up with Philadelphia CeaseFire, a violence-intervention program, to draw attention to the scourge of gun violence in urban communities like the one where he grew up.

While his message veered into sharing life lessons with 100-plus teenagers, it was the violence that brought him here.

In August 2018, his uncle Barry Parks was fatally shot while waiting at a SEPTA bus stop near 6th Street and Erie Avenue in the city’s Hunting Park neighborhood. He was waiting for a lift to work when he was shot in the head.

my uncle got killed last night in Philadelphia.. y’all gotta put the guns down man y’all don’t know how much people can mean to others.. REST In PEACE Uncle Barry

Turning tragedy into a springboard for a mission, Parks used the NFL’s “My Cause My Cleats” campaign to both honor his fallen relative and draw attention to Philadelphia’s gun-violence issue.

“Obviously, everybody knows Philadelphia, the City of Brotherly Love … and the city has been dealing with gun violence, murders,” he said. “I chose this cause because with my platform, and everything I have going on in life right now, I can spark that energy for people to actually make an effort to stop these kids, these people from dying to guns.

"It’s just so sad to have moms and dads crying from losing sons and daughters.”

The mission went beyond wearing cleats on a national stage for a single day. Parks chose Philadelphia Ceasefire as the organization to receive $15,000 as part of the campaign.

“When that happened, I wanted to reach out to help them spread their message and tell my story,” Parks said at the dual events, where students also heard from Ceasefire’s Colwin Williams and Marla Davis-Belamy. 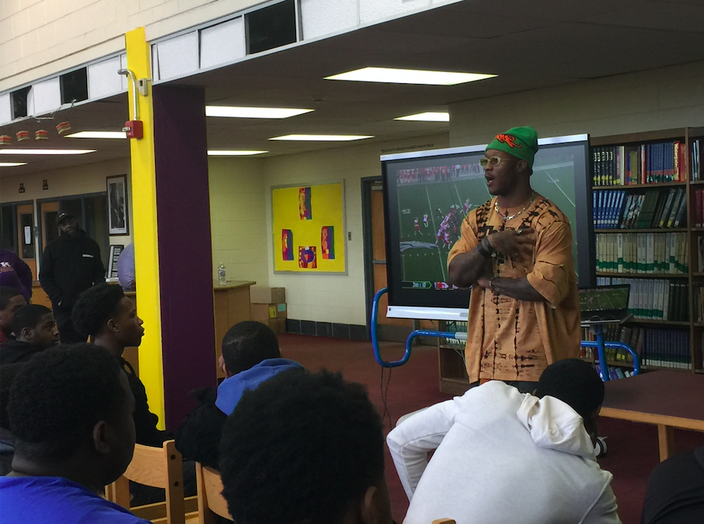 Will Parks, a Germantown High School graduate who now plays for the Denver Broncos, speaks to students at MLK High on Friday, March 29, 2018.

When Williams asked for a show of hands of those whose families have been personally impacted by a loss to gun violence, nearly all of the students raised theirs, during both appearances.

“Seeing 90 percent of you raise your hands, that’s trauma,” he said.

That made sense to Davis-Bellamy, who told the students that Philadelphia has more homicides per year than substantially larger municipalities like New York City and Los Angeles.

“It is a significant problem here,” she said. “That’s why we were so excited to get a call out of the blue from the Denver Broncos saying Will had identified Philadelphia CeaseFire as an organization he wanted to partner together with.”

Speaking for more than a half hour at each school, Parks blended tough love with real talk in a “bigger picture” look at the challenges faced by inner-city youths.

Parks hearkened back to his younger days when his father William McLeod instilled life lessons in him about dealing with various situations.

He implored the students to focus on the little things – hard work, looking someone in the eye when you’re talking to them, tucking your shirt in and others – that add up to success, which affords him a platform to visit schools in Denver and Philadelphia to spread the word.

“Be different. Be yourself,” he said. “I don’t have goals because goals have limits. With limits, you can get satisfied, you can think you don’t need to go further. My mind’s set on Pluto, you feel me?”

The second school he visited Friday was Martin Luther King, the school that Germantown High  merged with in 2013. Several dozen students crammed into the library to hear Parks' presentation.

Also in the library were students Joseph Walker and Delane Hart – a pair of standout football players hoping to hear their names called at the upcoming NFL Draft. The pair had just left the funeral of a 23-year-old friend lost to gun violence.

"Nobody was ever outworking me. Don’t let anybody outwork you.” – Will Parks

“Most people, when they get out, don’t come back to Philadelphia,” Davis-Belamy of Ceasefire said. “We need more champions like Mr. Parks to come back and help us face this issue.”

On Friday, Parks did just that. He also tried to serve as the sort of inspiration that Rodgers-Cromartie became for him seven years ago.

“I remember in the 10th grade there was a teacher who said, ‘you ain’t going to the NFL.’ I remember exactly what he looks like. If I were to see him today, I’d take him out to eat, to the movies. If he’s got kids, they’re coming too,” he said. “He told me what he thought I couldn’t do, but I’m not disrespecting him back. I’d show him what I became so he wouldn’t do the same thing to another kid.

“If you’re real with yourself, with your aspirations and what you want to do in life, don’t let anybody tell you that you can’t. Nobody was ever outworking me. Don’t let anybody outwork you.”

As for his future, Parks is going into an important season which will define what sort of contract he receives going forward in his career. After the release of safety Darian Stewart, Parks will make a case as the starter. He was asked whether he'd want to come play for the Eagles if things don't work out in Denver.

"Oh man, that's a really tough question. You're putting me in a tough spot," Parks said, quietly admitting that he grew up a Cowboys fan. "I really love it in Denver. I'd love to play my whole career for the Broncos."