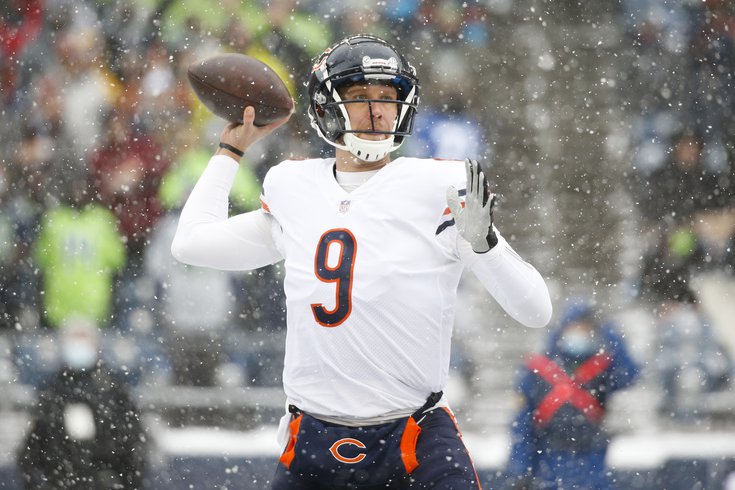 Former Eagles Super Bowl MVP suiting up for the Chicago Bears in 2021.

The most important Philadelphia Eagle of all time could find himself on his fourth team in five seasons in 2022.

Nick Foles, the Super Bowl LII MVP himself, looks to be on the outs in Chicago according to a report from NFL Network's (and Philly guy) Mike Garafolo:

The #Bears have explored trades for Nick Foles. With the addition of Siemian, expect that to continue, as the writing is on the wall for Foles, who has $1m of his base salary guaranteed in addition to the $4m roster bonus Chicago just paid him this month. https://t.co/IFVJ90HjR1

It's been a bumpy ride for Foles since his second tenure in Philadelphia, when he went 4-2 in postseason games. He signed a gigantic contract worth up to $88 million with the Jaguars in the 2019 offseason. He got hurt in Week 1 and was replaced, coincidentally, by current Eagles backup QB Gardner Minshew.

Foles was traded to the Bears the following offseason for a fourth-round pick. He made seven starts, going just 2-5 in those games. He fell out of favor in 2021, as the Bears signed veteran Andy Dalton and traded up in the first-round of the draft for Justin Fields. He started just one game this past season, but won it in typical Folesian fashion with a game-winning touchdown and two-point conversion with under two minutes remaining in the fourth quarter:

Where does St. Nick go from here? While Foles' 2013/2017/2018 flamethrower days with the Eagles are well behind, I maintain he's one of the league's best backup quarterbacks, a great add for a team with an established signal-caller and championship aspirations. No, he shouldn't come to the Eagles and have his gigantic shadow loom over Jalen Hurts, but he should end up with another team and be a valuable presence.

I remember watching that Bears-Seahawks game last December. There's still something magical about watching Foles go to work in a late and close situation. It instills a sense of chills that take me back to February 2018.

Foles is obviously a Philly legend. Eagles fans are forever in debt to him. He's received the utmost honor at PhillyVoice considering a region of our 'Best Philly Team Ever' bracket is named after ol' BDN.