NFL Rumors: Eagles wanted Christian Kirk, he got too expensive

The Eagles reportedly offered around $13 million, but were out with Jacksonville's $18 million 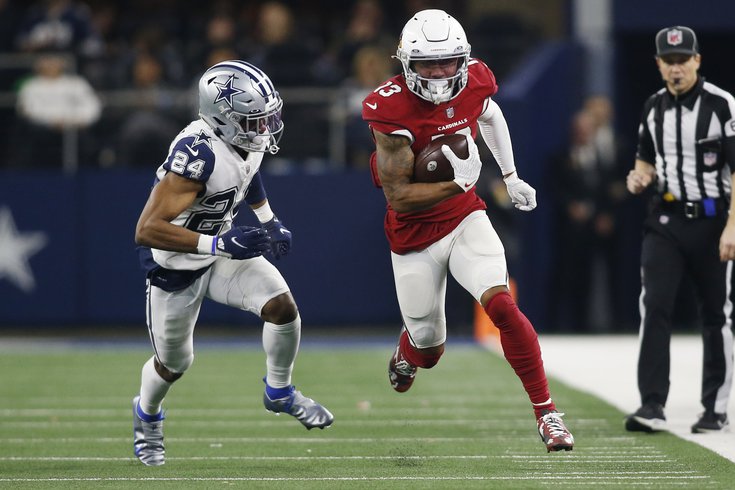 The Eagles wanted receiver Christian Kirk, but things apparently got too expensive for their tastes.

Appearing on 97.5 The Fanatic on Friday, NFL Network reporter Mike Garafolo told the station the Eagles were willing to offer Kirk around $13 million per year, but that once it got to the $18 million per Jacksonville was putting on the table, they were out.

The 25-year old wideout went on to sign a four-year, $72 million contract with the Jaguars that can reach up to $84 million in total.

“The Eagles we’re willing to going $13ish million for Christian Kirk. Once it hit $18 million they we’re out. They wanted him though.”

This lines up with what our own Jimmy Kempski reported on Kirk last week.

"I'm told the Eagles made a solid offer to him," he wrote. "But Jacksonville priced all interested teams out of the market."

And at a glance, the Jaguars' offer does seem a bit pricey for someone with Kirk's resume.

He did have a breakout 2021, catching 77 passes for 982 yards and five touchdowns, but did so as the third option behind DeAndre Hopkins and A.J. Green, and on an Arizona Cardinals team that faded down the stretch.

That's a lot of money for a slot receiver.

There are rumors going around Miami that DeVante Parker is on the trade block, though, and that the Eagles are interested.

They also have their three first-round picks to use in the draft next month, provided they stay put with those picks.

“There’s no way the Eagles stay in their draft slots (15,16,19). No way. They are going to give Hurts another year but they want ammo for next year to potentially go get a QB.”