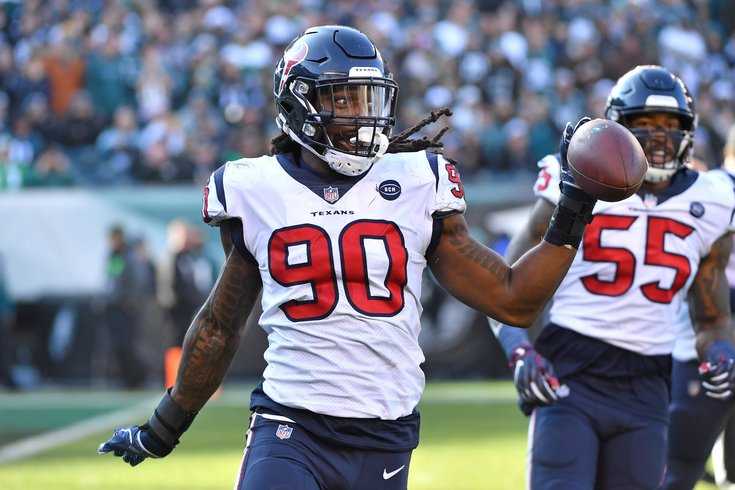 Disgruntled Texans lineman Jadeveon Clowney reportedly prefers the Eagles as a destination if he is traded from Houston, according to a new report from Aaron Wilson of the Houston Chronicle.

Dolphins are very interested in trading for Jadeveon Clowney, according to league sources, but have to get him interested in going there. Prefers Seahawks, Eagles as potential destinations. Fluid situation because he has leverage as unsigned franchise player

The idea of Philadelphia trading for Clowney has bounced around amongst Eagles fans from the moment rumblings began to circulate that he might be trying to force his way out of Houston. It's easy to understand why — he entered the league as one of the most hyped defensive prospects in recent memory out of South Carolina, and any time a name player becomes available, it's not long before people begin to generate fake trades to bring him to their favorite team.

Clowney's supposed interest in the Eagles, however, is another matter entirely. Wanting to play for a team with Super Bowl aspirations wouldn't be shocking, but there are potential concerns for a contract-year defensive end playing in Jim Schwartz's system.

Schwartz's preference is to keep and utilize a deep array of pass rushers to keep everyone's legs fresh, and for a player who is looking to get paid next summer, that might not be the best situation for him. The Eagles have an incumbent in Brandon Graham they just extended earlier this year, a young player they love (and want to develop) in Derek Barnett, and a cap sheet to manage moving forward. To bring in Clowney, someone would have to lose out.

(Of note on the cap/Clowney's contract: Clowney can't be signed to a new contract this season, thanks to a July deadline for signing franchise players in the NFL CBA.)

But exceptions could be made on both sides if the fit is right, and Clowney could be a special case. While his pass-rushing technique is still in need of refinement at age 26, he was one of the best run stoppers on a top-three run defense in football last season, and he still hasn't entered his prime yet. Playing on a line next to a tackle like Fletcher Cox, and with a lower snap count allowing him to get the most out of the snaps he does play, Clowney could potentially thrive in Philadelphia.

The question, of course, is cost. To go out and get an elite talent like Clowney, they would likely have to part ways with a considerable draft asset and/or offensive line talent, and they like to horde both of those things whenever possible.

From where the Eagles sit today, they might look at Graham, Barnett, and depth pieces like Vinny Curry, preseason standout Daeshon Hall, and other young players like Josh Sweat and feel content with their depth heading into the year. Clowney would upgrade that group for sure, but it's a matter of how much he's able to improve that unit and whether it would make up for the depth hit they'd take elsewhere.

And then there's the matter of paying Clowney after this season when his cap hit won't just fit snugly into their sheet. Clowney is on the block to begin with because he's in search of a long-term payday, and with Carson Wentz's big extension kicking in, the Eagles are going to have to carefully pick and choose who they want to spend big money on moving forward. Swapping out at least a first-round pick for Clowney, you'd be giving up cost-controlled future talent to bet on a player who has been very good, but has probably fallen short of the elite production you'd want to see from someone you'd ink to a huge contract next spring.

It's also worth noting the Eagles place a premium on culture and team-first mentality. Are they willing to bet on a guy trying to force his way out of Houston to chase a big-money deal elsewhere? We've heard little so far to suggest he's atop their priority list, and that factors into what they're willing to pay up for any talented player, Clowney included.

Clowney's interest in the Eagles may end up being meaningless in the end, but it's also late August, so it can't hurt to dream in the meantime.