A peek around the NFC East: Washington names its starting QB, and Cowboys contract stuff 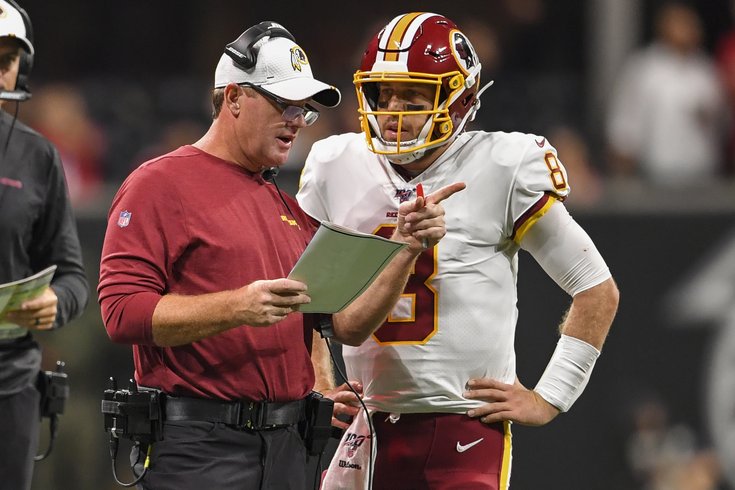 Case Keenum will start Week 1 against the Eagles.

As we've been doing occasionally throughout training camp, let's take a peek in at the Philadelphia Eagles' NFC East divisional rivals to see what they are up to, shall we?

As we mentioned last week in our peek around the NFC East, there really was no bad option for the Eagles Week 1, in terms of whatever Washington quarterback they'd have to face. However, Keenum may be especially ideal, seeing as they already know exactly who he is, whereas Haskins might have been a little more challenging to prepare for, given his extremely small amount of professional game tape. As you all remember, here's what happened the last time the Eagles faced Keenum:

In case you're wondering how Haskins has looked in the preseason, here are all of his throws and runs Week 1 against the Browns:

And Week 2 against the Bengals:

Aaaaaand Week 3 against the Falcons:

If I were to sum up his play in four words, I'd say, "good arm, questionable recognition." In other words, he's a rookie with some talent, but he has a ways to go.

Personally, in situations where the team clearly has no chance of contending for a Super Bowl, I lean toward just putting the rookie out there and getting him experience. If he shows something and wins some games along the way, great. If a bad rookie season ruins him mentally, then you're better off knowing what you have sooner than later.

Maybe the Eagles will see Haskins when they play Washington in Landover Week 15.

At left tackle, with Trent Williams still missing, Jay Gruden said that Donald Penn will start at left tackle Week 1. He had been battling with second-year pro Geron Christian for that job.

The Cowboys signed somebody other than Dak Prescott, Ezekiel Elliott, and Amari Cooper

All offseason long, Cowboys fans have been waiting for the team to get new deals done with Prescott, Elliott, and Cooper, and finally, they got a deal done, only it was with LB Jaylon Smith.

First, good for Smith, who was a top five type of talent heading into his final college game, when he suffered a devastating injury that threatened his career. It took a while to recover, but he has become a very good player in the NFL. His deal is for five years, and is worth $63.75 million. He now has the fourth-highest APY in the league among inside linebackers, at $12,750,000 per year, per OverTheCap.

Lol at that Alec Ogletree contract.

Anyway, the Smith deal is a good one, in my opinion. He was set to become a restricted free agent after the 2019 season, and the Cowboys would have certainly slapped a first-round tender on him at close to $5 million, had there been no deal. Instead, they got a reasonable deal done with him that will keep him under contract through the 2025 season, when Smith's money will look weak compared to other players at his position.

Might the Giants' offense actually be... good this year?

Here are the NFC East preseason standings after Week 3:

Also, I saw on Twitter that the Giants have scored the most points in the league this preseason, with 88. Here are how the teams with the highest point totals in the league in the preseason fared during the regular season over the last 9 years (preseason stats on NFL.com only go back to 2010):

As you can see, five of the last nine teams to lead the preseason in scoring ended up in the top 10 in scoring during the regular season.

Some of the above teams can use context. To begin, the 2014-15 Eagles were racking up points running Chip Kelly's bullshit fast-paced offense in the third and fourth quarters against third stringers. Additionally, the Ravens are always trying to win in the preseason for some reason, as they currently have a 16-game preseason winning streak. Take those two teams out of the mix, and and four of the last five teams to lead the preseason in scoring ended up in the top 10 in the regular season.

Just for fun, I checked to see if Pat Shurmur had a history of going all out in the preseason as a head coach, which could maybe be the reason for the team's preseason success this year. While his Browns teams earlier this decade perhaps may have provided false hope during the preseason to some degree, his Giants team last year did not:

Of course, all of the above may have been a colossal waste of time on my part for researching it -- and your part for reading it -- considering the league's trend this year to sitting starters in the preseason. Still, should the rest of the NFC East be worried about the Giants racking up points this year?

Here are five reasons for optimism for their fans:

It's easy to dismiss the preseason, but I can understand why their fans might have some optimism heading into this season, at least on offense.