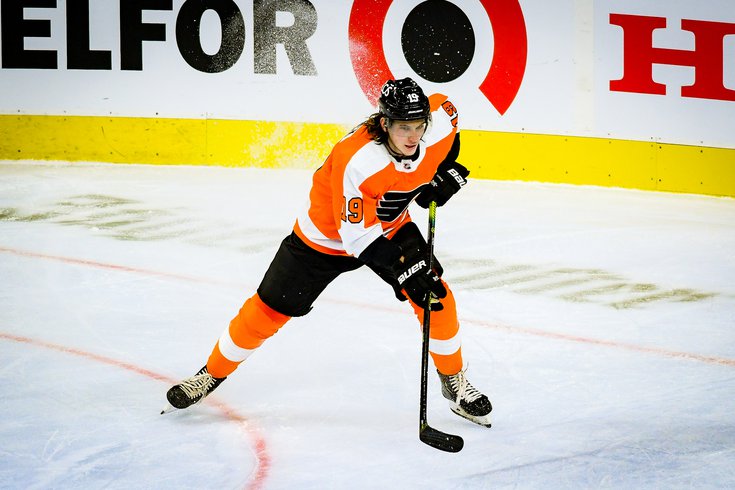 Flyers center Nolan Patrick may only be 22 years old, but he he's already changed agents twice and could soon be looking to change teams. At least that's the latest talk surrounding the former second-overall pick in the 2017 NHL Entry Draft.

According to reports, Patrick, a restricted free agent this offseason, recently changed his representation, and he did so possibly with the intent of getting traded out of Philadelphia after a rocky start to his career in Orange and Black.

Crossing Broad's Anthony SanFilippo said on his Snow the Goalie podcast with Russ Joy that he believes Patrick made the move because he simply "does not want to be here anymore."

This is not the first we've heard about Patrick possibly wanting out. The earliest rumblings came back in May when TSN's Frank Seravalli, a former Flyers beat writer, spoke about Patrick's change of representation and named the young center a name to watch this offseason as he could be on the move.

"It's certainly possible," Seravalli said of Patrick switching teams this offseason. "He's actually gotten a fresh start off the ice. Nolan Patrick has hired his third agent in three years, now with Rich Evans of West Sports and entertainment. And they’re going through the feeling out process to digest this season and everything that happened in his return to the ice. A little bit disappointing in terms of production. I think you could certainly see Nolan Patrick on the list of players this summer who ask for a fresh start elsewhere.

"However, they’re not there yet. And to be fair, the Philadelphia Flyers on their end think that Nolan Patrick is still a player that’s just scratching the surface. They’d like to see him get a full summer of training under his belt and come to camp healthy for the first time in a while. We'll see how that unfolds, but Patrick is an interesting name to watch this offseason as a restricted free agent."

It was a disappointing season indeed for Patrick, who finished with just nine total points in 52 games to go along with a minus-30 rating. Part of that was inconsistency in the lineup itself, with Patrick moving up and down the lines throughout the year. But a down season is also understandable following a year in which people were wondering if he'd ever play hockey again. After posting 30 and 31 points respectively in his first two seasons, Patrick missed a key season in his development when he missed all of 2019-20 with migraines that not only made it impossible for him to play in games, but it also made it extremely difficult for him to simply be on the ice at times.

Naturally, there's going to be some rust is to be expected. But the drop-off was precipitous, and now the Flyers are left with more questions than answers about the former No. 2 pick.

"I think on a positive front, Nolan was able to physically get through this season. After missing the 18, 19, 20 months, whatever it was of not playing, I think it’s a positive that he was able to complete the season," general manager Chuck Fletcher said last month. "He took some big hits. He played. From that standpoint, that’s something he can build off of. He wasn’t fully cleared to play until just prior to camp. He’s one of those players that I’m not sure had a normal offseason.

"Personally, I believe there’s another level to his conditioning and strength he can get to as he can train. I think he wasn’t skating the same, particularly in back-to-back games. You could see a drop-off in his skating. I do think there’s some things that could be improved just by being healthy and having a normal summer. I think we’ll have a better feel where Nolan’s at into next year. Our expectation is that he has a great summer, gets a little stronger, and gets a little more explosive. Comes into camp in a type of condition that he wasn’t able to achieve this year. That in turn will allow him to play the game in a higher level."

So, to hear the Flyers tell it, they believe Patrick can return to form if given an opportunity, and it's hard to argue that a full offseason to condition and prepare might be just what the doctor ordered. But for Patrick, it could be too little, too late, especially if SanFilippo's report about Patrick not liking the coach — or the brightness of the spotlight that comes with playing professional sports in Philadelphia — turns out to be true.

As for Patrick's side, his new agent spoke to the Inquirer's Sam Carchidi back in May following the change in representation and Seravalli's report. Here's what he had to say:

“I’m just at the stage now where I’m compiling information and trying to ascertain what ‘s happened in the past,” Evans said. “Once we get that figured all out, then we’ll have a plan for the future. It involves me speaking with Chuck [Fletcher, the Flyers general manager].” [...]

“At the end of the day, Philadelphia retains his rights. He’s s Group 2 free agent, so the Flyers determine ultimately what happens with his rights,” Evans said. “I’m sure we’ll have further discussions with Chuck about the whole situation. But I would like everybody to take a deep breath at the end of the year, and we’ll work from there.”   [inquirer.com]

Of course Evans will be in touch with Fletcher — after all, as he said himself, the Flyers still hold his client's rights, so even if he wants out of Philly, he has to go through Fletcher, who may be hesitant to trade a guy like Patrick.

Why? Simple. His potential.

Right now, it's hard to imagine Patrick's value getting much lower. But he has tremendous upside if he can turn back into the player the Flyers drafted. And he's only 22! The last thing Fletcher wants to do is trade him for pennies on the dollar only to watch him develop into a star elsewhere. Those are the kinds of moves that get GMs fired.

But his play last year, despite what they say publicly, might've been enough for Fletcher and Co. to realize it's time to move on, when there's still the promise of potential to help fetch them something in return. Plus, if Patrick simply "does not want to be here anymore" as San Filippo reported, then they might not have much of a choice but to try to get the best return they can.