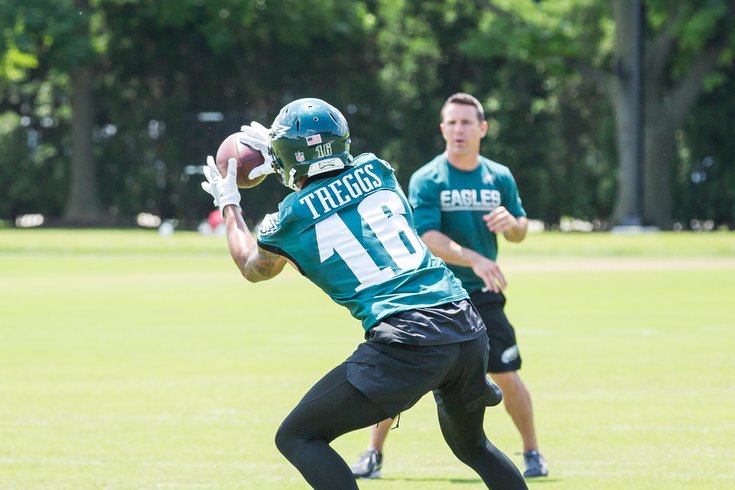 Bryce Treggs during OTAs at the NovaCare Complex.

Nick Foles may be long gone to Jacksonville and selling his home in New Jersey, but he's still helping out people connected to the Philadelphia Eagles organization.

Making the decision not to play anymore was very tough. The transition from football to a second career is by far the most challenging experience of my life...

Very thankful to accept a position at @AthletesFirst. My passion for football will never fade and I’m blessed that I get to stay involved with the business side of the sport. If you have any questions about what we do at A1, feel free to reach out.

As it turns out, Treggs turned to Foles for a recommendation for the job.

And HUGE shoutout to @NickFoles for vouching for my work ethic and character 🤝 https://t.co/uGkKTR4LIz

Treggs, 25, was an undrafted free agent out of California. He played one season with the Eagles in 2016 and served in the speed role during Carson Wentz's rookie year. The following year, Treggs spent the season with the Cleveland Browns and then returned briefly to the Eagles practice squad in 2018.

Foles signed a four-year, $88 million deal with the Jaguars this offseason, with a $25 million signing bonus and $50.125 million in guarantees. He's pretty much become a businessman in addition to a quarterback down in Florida, personally calling season ticket holders to make sure they're renewing their packages.

Not to mention, he's a brand ambassador for Lululemon Men these days, too. It pays to be the Super Bowl MVP.