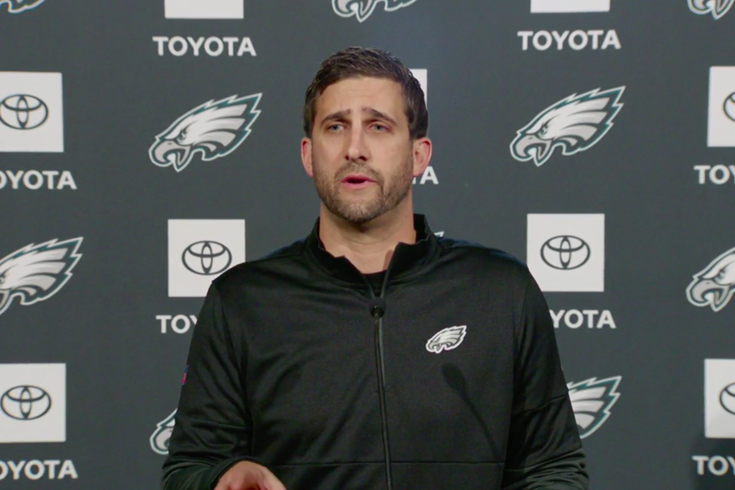 Nick Sirianni's first press conference as the head coach of the Philadelphia Eagles will be remembered for the wrong reasons. He was obviously nervous, he stumbled over some words, and he was put into a situation in which there were no good answers to some obvious questions that had to be asked.

If you can get past the delivery of the messages Sirianni had, the things he said were (mostly) fine. So let's look at the actual content of his words here.

• Competition: Teams that compete hard every day are better positioned to win close games when it matters, in Sirianni's view.

• Smart football team: This was the part Sirianni's opening speech in which he badly stumbled over his words, but I think it was also one of his best messages once you actually decipher what he said. Sirianni wants to put easy-to-learn systems in place, have his players master those systems, and allow his players' athletic abilities to be uninhibited by too much thinking, while also making his scheme difficult for opponents to prepare for. He also noted that the team is going to prepare heavily for situational football.

• Fundamentals: It's not enough to just have ability. The players also have to be put in the best position to win one-on-one matchups with proper technique and fundamentals.

#JimmySays: That may all seem like basic stuff, and it is, but the argument can also be made that the 2020 team lacked in several of the areas above. Easier said than done, but if Sirianni can deliver on each of those core values, he'll be a good coach.

On Carson Wentz, Jalen Hurts and a possible open competition at quarterback

Obviously, the Eagles' quarterback situation is by far the most important aspect of the team to be worked out this offseason. Nothing else is even close. And so, when Sirianni offered up non-answers to questions about Carson Wentz's and Jalen Hurts' standings with the team, more questions were going to follow.

• First Sirianni was asked if he took the job with the stipulation that Wentz would be his quarterback. He answered that he had to evaluate the entire roster, but that he felt that Wentz and Hurts were both "top-notch quarterbacks."

• He was then asked about Wentz's reported strained relationship with the team, and what his early conversations with Wentz have been like. Sirianni only acknowledged that he and offensive coordinator Shane Steichen have both spoken with Wentz.

• And then of course the next logical question was whether or not he had also spoken with Hurts. Sirianni said that he has, but added that he would keep those conversations between himself and each of his quarterbacks.

• Sirianni was then asked that since the team has two "top-notch quarterbacks," as he said, would there be an open competition for the starting role if both return. Sirianni then went back to the answer that he and his staff still had to evaluate everyone on the roster.

• Sirianni was later asked if Wentz was a prime topic during his two-day interview process, and how to get him back on track. He was also asked if he had a timeframe for establishing a starter, perhaps before training camp. Sirianni answered that a wide variety of topics were discussed during the interview process, and added, "As far as the starter, haven't really thought about that yet and naming a starter. That hasn't even crossed my mind." Lol, come on, man.

#JimmySays: I know that some folks were annoyed that Sirianni was peppered with a lot of questions about the quarterback position, but again, it's by far the most important facet of this offseason with this team, by a country mile. The above five questions, all of which were legitimate, and not even repeats of themselves, accounted for about one-third of the questions asked in the press conference, which frankly, is appropriate.

Very late in the press conference, Sirianni was asked, "Can you tell us one way or the other whether Carson Wentz will be back with the Eagles next year?" I'll certainly agree that the blunt nature of that question didn't seek to draw out any clues on what the team was thinking, and was only going to draw a repeat of Sirianni's canned answers. That's a "first question of the presser" question, not a next-to-last one.

Nevertheless, Sirianni's avoidance of all things quarterbacks does reveal some things. While I certainly didn't anticipate him to say "Carson is my guy," there was a greater than zero percent chance that he would. The fact that he didn't perhaps won't sit well with Wentz, given that Wentz reportedly does not want to be with the team if he's not the starter.

The feeling here, prior to the press conference, is that the Eagles would be more than happy to trade Wentz for whatever it is they deem to be appropriate value in return. However, they have to be prepared to roll with him going forward if they are unable to find a trade partner. In my view, Sirianni's attempts to punt on any Wentz questions sort of backed up that line of thinking.

In case you were unaware, Sirianni has never called plays in the NFL. I thought he nailed the answer to that question.

"When you call plays in the NFL, it's a collaboration, it's a collaboration of everybody," he said. "The hard work of how you call plays is Monday through Saturday. It’s truly Monday through Saturday. Being in those meetings together, everybody being in the meetings together, thinking about the plays first, then taking that game plan and spelling it out to the quarterback and seeing what they like.

"Then, when you get to later in the week, saying, ‘Okay, what is our first 3rd and 2 call? Here is what it is. What do we call on 2nd and 10, 2nd and 1, what do the tendencies say?’ That is constantly talked about throughout the week. If you're doing that and putting in the hard work throughout the week, you're going to be ready to call the game on Sunday.

#JimmySays: I think we overrate play calling in the NFL sometimes. I mean, if you're calling a fade on fourth and goal to the fifth tight end who has literally never played an NFL snap in his life up until that point, well, that's a bad play call.

But I agree completely here with Sirianni that good play calling is the result of good game planning during the week.

Most of the top-level assistants the Eagles hired were familiar faces to Sirianni. Naturally, he had good things to say about those guys. An exception, in terms of familiarity, is quarterbacks coach Brian Johnson. Sirianni liked that Johnson is coming from a college background, where there's more innovation than there is in the NFL.

"Brian, a great human being, great person, great fundamentally, great scheme-wise. Again, he's just super sharp. Then on top of that, he gives us the ability to take some things from the college game to make our offense just become a little bit more difficult to defend. That was another thing that was really attractive about Brian."

On roster control / interest in free agency and the draft

As a little background, there’s control of the 90-man roster, the 53-man roster, and the 47-man (or 48-man or whatever) game day roster. A quick tutorial:

During Pederson's initial press conference, he said the 53-man roster would be a "collaborative" process. Pederson, Jim Schwartz, Dave Fipp, and the positional coaches surely gave their opinions on players, but ultimately, Roseman had final say. There's also reason to believe that Pederson didn't even have full control over the game day roster.

"Howie has final say over the 53," Sirianni said. "I believe I have the say over the 47 on game day of what we need to go through the game and get into the game, the pieces that we need."

Sirianni also seemed to understand that he would not be making decisions on free agents, and in the draft, and would be limited to offering up suggestions only.

"As far as picking the players and helping pick the players, I really look forward to working with Howie and his staff to help get the players in here that we feel like fit to what we want to do offensively and defensively," he said.

"Again, we work with what we have, but there are players where we are like, ‘This player has this skill set, we'd love to use him for these couple things we've had success with in the past.’ Really look forward to doing that, first evaluating our team, then doing that with Howie, having those conversations about what we need as an offense, what skill set for the certain types of things we like to do offensively and defensively. Really look forward to doing that with him because I think the best organizations I've been on are the ones that work together at that."

#JimmySays: In other words, Roseman will continue to have more decision-making power than most general managers in the NFL.

Lurie gave an introduction that was more than 15 minutes long and more than 2000 words, and then didn't answer any questions. That is WEAK.