Everything new Eagles coach Nick Sirianni had to say about Carson Wentz, Jalen Hurts and the QB situation 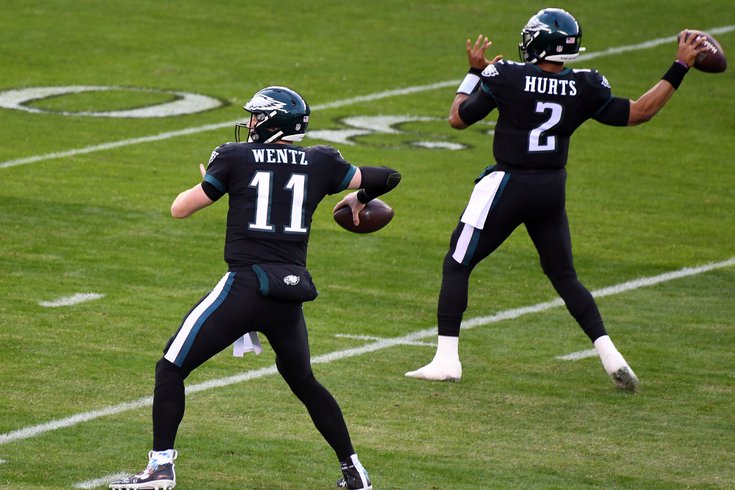 And, as you might expect, a large percentage of the questions had to do with the team's quarterback situation, and whether or not Carson Wentz will return to the starting role next season — and whether or not he'll even return at all. While there were plenty of questions asked on the subject, Sirianni did a good job of keeping his cards close to the vest, not revealing any of the Eagles' intentions at the quarterback position, at times making it sound like Wentz would be the guy and moments later making it sound like he could just as easily be playing elsewhere next season.

There is A LOT to cover from this press conference, and we'll have more of it in the coming days (and hours), but let's start by taking a look at the questions fans probably want answered most: Who will be the Eagles quarterback next season?

For each of these (which are presented in chronological order), we'll provide the question, Sirianni's full answer, as well as a little analysis of our own. Let's dive right in...

Did you take the job with the expectation that Carson will be the starting quarterback and it's your job to fix him?

"I took this job because of what a great organization this is. And the plan here is that we have to go through a lot of things here. We're getting our coaching staff in place so that we can get the best people in here as coaches. And what we need to do is evaluate the entire roster. We have a lot of things to go through in these next couple weeks with evaluating the entire roster and every position — quarterback, wide receiver, defensive back — that is what we're going to be diving into here. And it's great.

"We have two quarterbacks in Carson Wentz and Jalen Hurts that are top-notch, top-notch quarterbacks. And a lot of teams don't have any, so I'm just really excited to work with both of them."

Analysis: There were reports coming out during the Eagles' coaching search that suggested that the team was looking for a coach who preferred trying to fix Wentz rather than just immediately shipping him out and opting to develop Hurts instead. If those reports are true, then it would suggest that Sirianni is here to fix Wentz. But that might not necessarily be the case, whether it's because Hurts ultimately proves to be the better option or Wentz doesn't believe he needs to be fixed and thus becomes unfixable.

There's something to be said about the old adage that if you have two quarterbacks, you don't really have one. That certainly seems like it's looking to be the case here in Philly, but with a young coach and two young quarterbacks, perhaps there's a chance he can turn one of them into a successful starter going forward.

Still, this was a total non-answer, something that you'll see is a bit of a theme here.

There have been plenty of reports about Carson's relationship with the organization being strained. What have your conversations with him been like so far and do you feel like it's a reconcilable relationship?

"I can't speak on that. I've talked to Carson, I've been reaching out to our players — it's been a whirlwind, obviously, so far as far as just the amount of things I've needed to do since I've taken this job. Trying to communicate with all our players as quickly as I can. I've talked to Carson, we had a good conversation. I know he's talked to our offensive coordinator as well, and I'm just excited to work with him as we move forward."

Analysis: This is another non-answer, but in this case it's at least more understandable. After all, Sirianni has been here for a week and has only had one convo with Wentz (it sounds like), so he likely doesn't know whether or not the reported 'fractured' relationship between Wentz and the organization can be mended or how long something like that may take.

It's also worth wondering what happened to make that relationship so strained. Was it the decision to draft Jalen Hurts? Or the decision to bench Wentz in favor of the rookie QB? Or a combination of the two? Either way, it's beginning to seem like this relationship won't be healed until Hurts is out of the picture and Wentz again feels secure in his position as the team's starting quarterback. That's not really a reaction to anything Sirianni said on Friday, just a reading of the room.

Have you spoken to Jalen Hurts as well? And what has your message been to the two respective quarterbacks?

"Yes, I've also spoken to Jalen. Again, I will keep our conversations private, those are conversations between the player and I. But the same conversation with him. I'm really excited to work with him. He had a great — I mean, we studied him last year and he had a great college tape. He played meaningful snaps this year that he played well in.

"The conversation with him and the conversation with the guys that I've had [conversations with] is that I'm really excited to start working with you. And most of the conversation is getting to know the individual besides football. I'm going to get to learn a lot about them in football in these next weeks, but I wanted to learn about each player that I've talked to personally. And then when I look at the tape — and I look forward to doing this — being honest and having open and honest communications with each one of them about what I saw on the tape and how we can, all of us, improve."

Analysis: As we alluded to above, any convos that Sirianni has had with players so far have likely just been introductory talks. Reading too much into them would be dangerous at this point. That being said, it's interesting that Sirianni has been in contact with both players. I wonder how many other players he's been in contact with so far and how far down the depth chart that would go depending on the position. Like, has he talked to backup offensive lineman? The third string safety? Probably not. But Sirianni knows he's likely going to be ultimately judged by how successful these quarterbacks are, specifically which one he decides to start.

And that leads us right into our next question...

You said you have two top-notch QBs in Carson Wentz and Jalen Hurts. Does that mean there will be an open competition at quarterback if they both return?

Analysis: Another non-answer, but this one might be the most interesting of the bunch, because it doesn't seem like one where he'd have to give a non-answer. If he hasn't decided on his quarterback yet — which, duh, it's his first week on the job — than it would seem like there would be an open competition at the QB position. But he wouldn't go quite that far, saying that more evaluating needs to be done. He eventually admitted that every position is going to be "open," but that isn't the same as there being an open competition at the start of training camp.

It's also worth noting that Howie Roseman, and not Sirianni, will have control of the 53-man roster. That means that at any point, Roseman could trade away one of the two quarterbacks, regardless of who the coach thinks is the best choice. Obviously, Sirianni will have control over the game day roster and will decide the starter on a weekly basis, but if Roseman gets blown away by an offer or believes moving one of the QBs is in the best longterm interest of the team, he can do that — although we'd like to assume that the coach would at least be consulted before any such decisions were made.

Carson Wentz went through a very steep decline last season. Was that a prime topic of that interview, how to get him back on track? And do you have a timeframe for establishing a starter? Do you think it's important to have one, for instance, going into training camp?

"So again, many different things that we talked about. Players, positions, coaching staff, it was all on the table. And as far as the starter, haven't really thought about that yet and naming a starter, that hasn't even crossed my mind. Again, just trying to evaluate the players on our team and get the staff together."

Analysis: If there's no timeline for establishing a starter — and neither of these guys are traded — it's going to make for one hell of an offseason of speculation here in Philly. And if they're both still on the roster come training camp (and it is indeed an open competition), get ready for some of the most intense camp coverage you've ever seen from the beat writers.

In the last 3 years in Indianapolis you had three different quarterbacks in Luck, Brissett and Rivers. How do you think that prepares you for handling the quarterback situation here. If you have to decide between Carson Wentz and Jalen Hurts, does that mean that you're not particularly married to one QB in particular? That you can go with either one?

Analysis: I don't think the Eagles are going to be flipping back and forth between quarterbacks on weekly basis depending on matchup, but it is nice to see that Sirianni doesn't seem to be coming in here with a certain system that he's going to try to make his players fit in. Instead, it appears he's going to tailor his system in an effort to maximize his players' skills. That always seems like the better option anyway.

Can you tell us one way or the other whether Carson Wentz will be back with the Eagles next year?

Analysis: The coach definitely received some coaching for this one. And I'm pretty sure "evaluating everything" was the phrase they told him to include. Just a guess...

That being said, it's certainly interesting that Sirianni wouldn't commit to Wentz being back next season. Does that mean he'll be traded? Not necessarily. But it does mean that he could — as there's no other reason he wouldn't be back in Philly next year. That's about as close to a confirmation that the Eagles are open to trading the 28-year-old QB as you'll get.