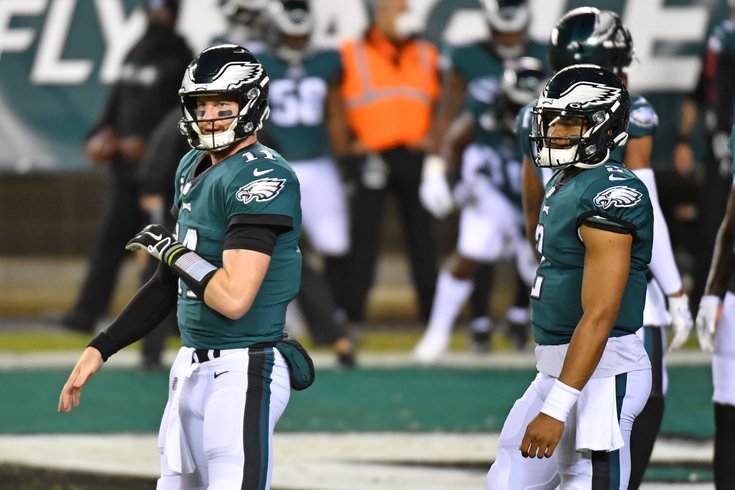 Now that the Philadelphia Eagles have found their new head coach, we'll turn our attention to which of the players will stay, and which ones will go. As always, we'll start with the quarterbacks.

As you all saw, Wentz stunk in 2020, got benched, and he reportedly wanted out of Philly if he wasn't going to be the starter going forward. What a downturn it has been.

The Wentz "stay or go seesaw" has already been back and forth a few times this offseason, and we haven't even gotten to the Conference Championship Games yet. When it appeared that Doug Pederson would stay on as the Eagles' head coach after the team made him available alongside Howie Roseman for an end-of-season press conference, it felt a lot like Wentz would go, given the reported "fractured" relationship between the two. But Pederson was fired, and during the head coaching search that ensued, the Eagles reportedly indicated to candidates that they intend on fixing Wentz.

Maybe the team still believes in Wentz. Eh. It's probably more like they know they're stuck with him. The bet here is that they called around the league to gauge interest in him, and came away disappointed in the response. And so, the head coaching search centered around candidates that had a plan to fix him in the event they can't move him for what they would deem to be adequate compensation.

Back in December, we laid out in detail something of a Wentz contract primer. It's good. Go read that. Done? Cool. As you saw, if the Eagles trade Wentz this offseason, they will take on about $33 million in dead money, which would be an unprecedented figure, but they would have no further cap commitments to him in 2022 and beyond.

If they don't trade him, they're essentially making a two-year commitment to him, as the dead money hit to trade or release him in 2022 would be over $24 million. In other words, they're screwed either way, unless Wentz stays on the team and improves in 2021 as dramatically as he fell off in 2020.

Anyway, once you got past all the nerdy contract stuff in that piece, you saw that my conclusion was as follows:

Carson Wentz won't be released. While he could be traded, the bet here is that the Eagles' demands and another potential team's willingness to acquire Wentz as a reclamation project (but only on a bargain deal) will not align.

In my view, the most likely scenario is that Wentz will remain on the team in 2021, and he will have to battle it out with Jalen Hurts for the starting job during training camp.

If Wentz wins the job, plays well, and looks like he's something closer to what we all expected this year, then great. If he's bad again, or if Hurts beats him out, then the Eagles will have a $128 million backup, and it'll cost them $24,547,075 in dead money to trade or release him during the 2022 offseason.

#JimmyVerdict: The belief here is that the Eagles should trade Wentz if the opportunity arises, but the team isn't likely to find a super willing partner. Again, since publishing that primer, Wentz's likelihood of remaining on the team in 2021 has sort of seesawed a bit, but the above conclusion from that piece is where I'm at right now. Stay.

I think before we decide on Hurts' roster status, we should first look at what he did well in 2020, and where he needs to improve as an NFL quarterback.

Hurts' best trait is obviously his running ability. After taking a closer look at him after the draft, the NFL player I thought he most resembled was Dak Prescott. As we noted in that comp piece, Hurts and Prescott have a similar running style, as their powerful legs allow them to run through tackles. That has made Prescott a rushing threat near the end zone in the NFL (24 career rushing TDs with Dallas), and Hurts should be a threat in close as well, as we saw against the Cardinals late in the season:

But Hurts is also a lot more athletic than Dak, as their Combine measurables show:

In a league where tackling is often bad, the idea of pairing Hurts with a good back like Miles Sanders can put a lot of stress on opposing defenses. That's obviously where Hurts has a big advantage over most quarterbacks.

Of course, you don't want your quarterback taking too many hits, because you want him to stay on the field. #Analysis. However, it should probably be noted that Hurts is a monster in the weight room, and those guys tend to have a better chance of staying healthy than players without much muscle mass.

As for the biggest concern, I think it's just his general throwing, both in terms of arm strength and accuracy, particularly in the intermediate parts of the field. The challenge for Hurts because of his lack of plus arm talent will be whether or not he can learn to consistently throw with anticipation. He has the intelligence to do that, in my view, and he has already shown some ability to "throw guys open," but that will be an area that he has to master. And then, of course, he had some fumbling issues.

Getting back to the Dak comp for a moment, Dak showed in his rookie season that he was clearly starting material. Hurts left doubt, though to be fair, he wasn't operating with the same kind of weaponry at Dak's disposal. We saw some good things from Hurts, but he wasn't consistent. If Hurts had consistently balled out, there might be some logic in building an offense around his running abilities, but obviously, that does not appear to be the team's plan in any way.

Could the Eagles trade Hurts? Jeffrey Lurie repeatedly referred to Wentz and Hurts as "assets" during his press conference.

"On the quarterback situation, we've got two really interesting assets," Lurie said as part of an answer on why the Eagles would be a good job for head coaching candidates. "They are both young. They are both hungry. They are terrific people, very different and terrific people. A coach is going to have options. A coach is going to have an ability to fix what he feels is necessary in our offense and have a potential star in Carson and a potential star in Jalen. That gives us an asset, also, so that if we end up deciding on one some day, the other is a really good asset."

What's the return? Am I getting a top 50 pick for him? If so, then sure, trade him, undo the silly mess you created a year ago by taking him in the first place, hope Wentz is the guy, and if not, draft a quarterback in 2022. Anything less, and (a) it's not worth turning your back on Hurts' potential, and (b) I'm not trading him just to placate Wentz, who was of course one of the worst starters in the NFL a season ago.

But that's probably all moot, because I'm not sure why any team would give up a top 50 pick for a second-year player (and thus only three more years on his rookie contract) when it's a loaded quarterback draft with a bunch of appealing first- and second-round options.

#JimmyVerdict: Neither Wentz nor Hurts are the "assets" that Lurie thinks they are, and they're both back. Stay.

The only thing the "unstoppable" Sudfeld had going for him was that he was in Pederson's system for four years. He doesn't have that to fall back on anymore.