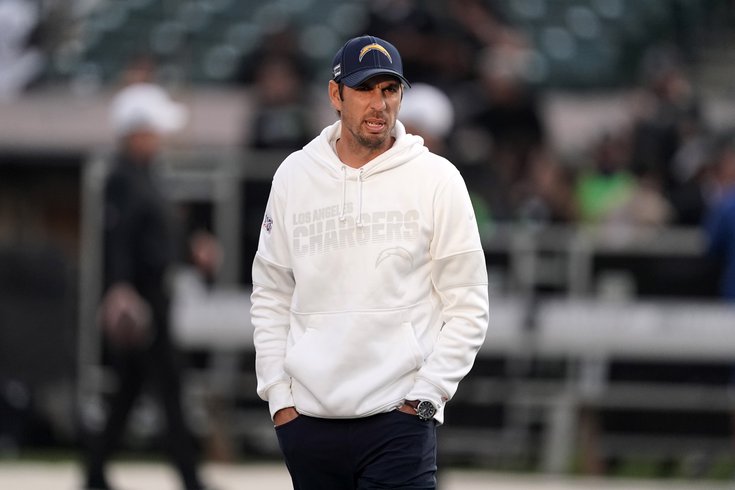 So far, an offseason of change down at the NovaCare Complex has ushered in the Nick Sirianni Era in Philadelphia, with the 39-year-old coach set to take over the Eagles as Doug Pederson's successor.

Jim Schwartz is gone, and will be replaced by 37-year-old Jonathan Gannon. Press Taylor, Rich Scangarello and Marty Mornhinweg are all gone as well, and their responsibilities will largely land with new offensive coordinator Shane Steichen, the youngest of the Eagles' new trio of coaching hiring at just 35. And unlike Gannon and his boss, Sirianni, the Birds' new O.C. actually has experience in his position — and to top it off, he has actually been a play-caller in the past, something that was a bit of a knock on Sirianni given that Pederson called the plays during his time in Philly.

But it hasn't all be sunshine and rainbows for Steichen, who was part of Anthony Lynn's staff with the Chargers the last few years before Lynn was fired and, it seems, Los Angeles didn't do a whole lot to prevent Steichen from making a lateral move to Philadelphia.

So, what do we know about the Eagles new offensive coordinator? Actually, quite a bit more than is known about Gannon, or even Sirianni, given that he has a track record in this role and some past experiences that can be used to gain some insight into how he might run the offense in Philly, whether that's with Carson Wentz, Jalen Hurts or someone else.

Let's take a look at what they're saying...

'Most frustrating team to watch'

Count The Athletic's Sheil Kapadia among those who aren't all that impressed by the Eagles' decision to hire Steichen. Obviously, he gives the young play-caller the benefit of the doubt coming into a new situation here in Philly, but there are some concerns he brings as well based on his track record in Los Angeles.

And while some have pointed to Steichen's development of rookie quarterback Justin Herbert as a positive for the new O.C., you'll soon find out that not everyone believes it was Steichen who played the most important role in that regard. This also isn't the last time you'll read about Herbert bailing out the Chargers coaches and succeeding in spite of them, not because of them.

All of that makes you wonder if Steichen was actually the best choice for the Eagles or if Sirianni would've benefitted from a slightly more veteran offensive coordinator to balance things out. Here's more from Kapadia...

Maybe Steichen will be a good fit. But there’s little evidence to suggest the Eagles did anything to cast a wide net and find the best candidate. In Steichen’s one full season as an offensive coordinator, the Chargers finished 15th in DVOA. Late in the season, I labeled them the most frustrating team to watch in the NFL, and part of that was play calling. The Chargers ranked 19th in early-down pass frequency, despite having a fantastic quarterback in Justin Herbert and the seventh-ranked passing offense by DVOA. They ranked 31st in rushing DVOA. They consistently put Herbert in bad situations, and he bailed them out.

Now to be fair, it’s unclear how much of that was Steichen and how much was him just doing what head coach Anthony Lynn wanted. But it’s something to keep an eye on.

If you want to take the glass-half-full view, Herbert was really good as a rookie, and maybe part of that was working with Steichen. Then again, there are some smart people who believe it might have been more quarterbacks coach Pep Hamilton, who worked more closely with Herbert. And it’s entirely possible that Herbert is just really freaking good and will play well regardless of who his quarterbacks coach and offensive coordinator are.

Bottom line: Maybe Steichen will be fine and the hire will work out. But there’s not a lot of evidence to suggest the Eagles were serious about searching far and wide for the best candidate.  [theathletic.com]

That isn't exactly confidence-inspiring when it comes to the team trying to fix a broken Carson Wentz, or even trying to develop Jalen Hurts.

It's always good to get the view from the other side, so let's check in with Brandon Gowton of Bleeding Green Nation, who interviewed his Chargers counterpart, Michael Peterson, of Bolts from the Blue. And to hear Peterson tell it, LA fans are relieved the Eagles are taking Steichen off their hands. He's another one that not only questions Steichen's role in Herbert's development, but also doubts his ability as a play-caller and believes the rookie QB succeeded in spite of the coaches.

This isn't going as well as we hoped...

1 - There was some talk about Steichen staying on as Brandon Staley’s OC. How do Chargers fans feel about him leaving for the Eagles instead?

In all honesty, Chargers fans were fairly relieved that he would not be returning. Fans wanted a new face and they felt Steichen was a bit underwhelming as an OC. The majority will tell you Justin Herbert’s development was 99 percent thanks to [former Chargers quarterbacks coach] Pep Hamilton, so very few saw any real value in Steichen as the potential OC of the future.

2 - To what extent does Steichen deserve credit for Justin Herbert’s development?

I mentioned it a little in the first answer, but most fans will only give Steichen a small portion of the credit. He was the one calling plays, after all. Anthony Lynn said the calls were 100 percent from Steichen, so you can’t take that away from him. However, many — myself included — felt that Justin Herbert succeeded in spite of Steichen, and not because of him.  [bleedinggreennation.com]

That's now two people who have tossed aside the notion that Steichen is some sort of quarterback whisperer. Let's make it three, shall we?

I kinda thought the key to Justin Herbert’s development was QB coach Pep Hamilton. But maybe that’s just me ... and Herbert, who has effusively praised Hamilton. https://t.co/phP6IP68Q1

We've mentioned a few times that Steichen might not be the best play-caller out there. Part of that was his propensity for calling running plays on first down despite that being a glaring weakness of the team. He also seemed to be a more run-heavy coach than most, which worked well when Austin Ekeler was tearing defenses apart. But he seemed to keep at it, even after it stopped working.

And then there was the infamous (at least among Chargers fans) third-and-1 play...

There were hiccups, such as when Steichen and Lynn exchanged words on the sideline after Steichen called a running play on third-and-1 from Atlanta’s 8-yard line, with no timeouts and 22 seconds remaining in the first half of what eventually became a Chargers victory.

After the run failed to produce a first down, the field goal team hurried onto the field but was flagged for an illegal shift, triggering a 10-second runoff that ended the half.

“Should not have dialed up a run right there,” Lynn said afterward. “That was a mistake. I don’t really want to go into the details of mine and Shane’s conversation after the game, but I’ve put that one behind us. I think it’s an easy fix. We’re gonna move on and our focus is going to be on [the] Las Vegas Raiders.”

When Steichen was asked about the sequence -- similar to another that had occurred a few weeks earlier -- he referred reporters to Lynn’s remarks and reiterated that he was moving on to preparing to play the Raiders.  [inquirer.com]

MORE: What they're saying about new Eagles DC Jonathan Gannon

Mistakes happen, right? And we'd assume Steichen would learn from something like the above situation. But we all know what happens when you assume.

As it turns out, that wrong call against Atlanta actually happened two weeks earlier in Buffalo. In other words, it should've already been fixed before the Falcons game, which is perhaps why Lynn and Steichen exchanged words.

Either way, there are more concerns coming out of Los Angeles, this time from a Jason Reed column on FanSided's BoltBeat.com titled "Why keeping Shane Steichen would be a massive mistake," written before the Eagles hired him when there was still talk of him returning to the Chargers under new coach Brandon Staley.

We want to put all the blame on Anthony Lynn, and he certainly deserves most of it as he was the one establishing the offensive philosophy, but Steichen absolutely had a hand in that. Now, to play devil’s advocate, the hope is that Staley would implement a new offensive philosophy to allow Steichen to utilize Herbert more.

But still, I would not say that the play designs were all that special in LA. How often do you see a team like Kansas City or Buffalo use pre-snap motion compared to the Chargers? It is a tilted balance.

And let’s not forget: Steichen was the one that called the now-infamous run play as the clock expired in the first half against the Atlanta Falcons after making the SAME EXACT mistake two weeks prior against Buffalo.

Again, Lynn deserves blame as the head coach, but Steichen legitimately thought that running the ball in that situation was a good idea. How are we going to trust him as the primary play-caller in a high-pressure situation when the LA Chargers have a defensive-minded head coach?  [boltbeat.com]

And finally, let's go to some strict biographical info on Steichen, who got his first NFL job as a defensive assistant in San Diego under Norv Turner. He then spent a year as an offensive assistant in Cleveland before returning to the Chargers in 2014, where the groundwork was laid for his eventual climb up through the organization and onto Philly...

•  This past year, in Steichen’s one full season as offensive coordinator, the Chargers ranked 9th in the NFL in total yards, 6th in passing yards, 6th in first downs and 9th in 3rd-down conversions but only 21st in red-zone scoring and 30th in rushing yards per play. They averaged 24.0 points per game, 19th-most in the NFL.  [nbcsports.com]