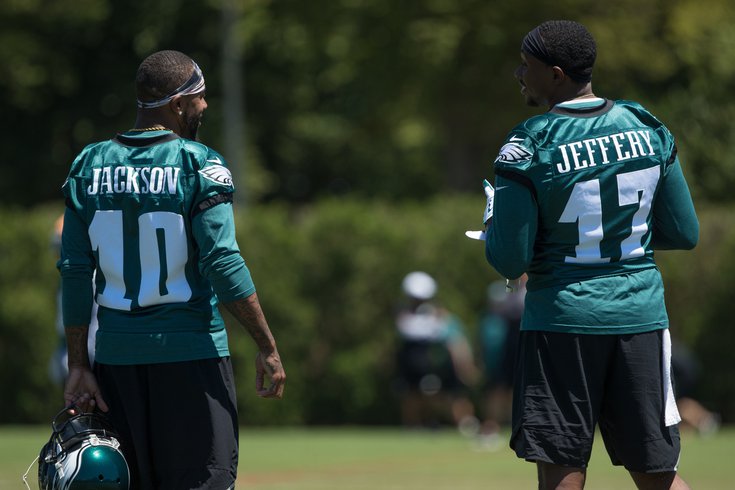 DeSean and Alshon? Both probably gone.

Philadelphia Eagles wide receivers have long been the subject of the fan base's frustration, and with good reason. The 2020 season was no different in that regard. Today we'll look at which receivers will stay, and which ones will go.

Jeffery was a good addition in 2017 when a strong market didn't materialize for him in free agency, and the Eagles were able to sign him to a reasonable one-year deal worth under $10 million. After a productive start to the 2017 season, Jeffery was rewarded with a four-year extension worth $52 million, and he helped the Eagles win a Super Bowl.

And then it all went downhill. He infamously anonymously badmouthed the starting quarterback in consecutive years in 2018 and 2019, and he was not the same player on the field, particularly in 2019. Just before the start of the 2019 season, the Eagles made the egregious error of guaranteeing Jeffery’s 2020 salary in exchange for a small pay cut. That turned out to be a disastrous move, as Jeffery had a bad year before suffering a serious foot injury that required surgery.

It sure felt from the outside like a no-brainer to move on from Jeffery during the 2020 offseason, but the Eagles held onto him for reasons I'll never understand. But beyond just keeping him, the Eagles made a series of additional comical mistakes along the way.

First, they activated him off of the PUP list before they cut down to their final 53-man roster. Had they kept him on PUP to start the season, he would have had to have stayed there for at least 6 weeks, at which point they could have activated him at any time, but he would not have counted toward a roster spot until activated. Jeffery wouldn't suit up for a game until Week 10, occupying a roster spot along the way for the entire season. The Eagles essentially had to cut a promising rookie DE in Casey Toohill at one point, for example, because Jeffery was costing them a roster spot. To be determined if Toohill ever amounts to anything, but the process of that decision-making made no sense whatsoever.

And then once Jeffery was healthy enough to play, he took snaps away from Travis Fulgham, a player who was one of the rare bright spots on the roster at the time Jeffery was activated. That loss of playing time may have slowed Fulgham's growth.

In total, Jeffery produced six catches and one TD in seven games. What an absolute disaster his high-risk, low-reward contract renegotiation turned out to be. Of all the bad moves the Eagles have made over the last couple of decades (the Danny Watkins pick, the Nnamdi Asomugha signing, etc.), that might have been the worst one. It really just made no sense whatsoever.

#JimmyVerdict: It appears that Jeffery and Malik Jackson will end up being June 1 cuts this offseason. Go.

Reagor has only played one season in the NFL, and what he eventually will be in the NFL is hardly decided yet. However, it's impossible to evaluate his rookie season without mentioning the name Justin Jefferson, who the Eagles passed on during the 2020 draft to take Reagor.

The Eagles thought he was a high-volume slot guy, which in their opinion was not more valuable than an outside receiver in a west coast offense. They erred there, bigly. They also probably overrated Reagor's speed.

Though he did miss five games, Reagor finished with 31 catches for 396 yards (12.8 YPC) and 1 TD, which was good for 9th among rookies in receptions and 11th in yards. 10 rookie receivers had more receiving TDs.

Many felt that Reagor could take a little time to develop, and if so, then the Eagles will hope the best is yet to come, but the immediate returns were disappointing.

Greg Ward is a good story, and he makes the plays that every NFL receiver should make, but he is not a downfield threat, nor is he an explosive weapon after the catch. On 81 career catches, Ward has averaged 8.3 yards per catch, which are running back-like receiving numbers.

Ward is a perfectly fine player to have on the roster as a reserve who also contributes at times on special teams, but he is far from an ideal starting slot receiver. The Eagles should be looking to upgrade at that spot in the 2021 draft, which is loaded with explosive slot receiver talent.

#JimmyVerdict: Ward is at least a competent player, and there isn't enough talent on the roster currently to threaten his roster spot security. He is an exclusive rights free agent, which means the Eagles can opt to keep him aboard as an extremely cheap player. Stay.

In 20 years, will we remember Travis Fulgham fondly, or will he be an oddball trivia answer to the question, "Who led the 2020 Eagles in receiving yards?"

During a five-game span in October and November, Fulgham had 29 catches for 435 yards and 4 TDs, and many were excited that the Eagles had a bona fide No. 1 receiver on their hands.

As noted above, Jeffery's return to the lineup idiotically sent Fulgham to the bench, and even when Fulgham got opportunities thereafter, he was nowhere near as effective.

#JimmyVerdict: Fulgham showed enough that he belongs on an NFL roster, and certainly one with such a dearth of talent both at receiver and otherwise. Stay.

Arcega-Whiteside had a good preseason in 2019 and a good training camp in 2020. But in real games, he has come up small. JJAW's rookie season was marred by mistakes, most notably a drop that cost the Eagles a game against the Lions. He finished with 10 catches for 169 yards and a TD. In 2020, he was more of an afterthought, as he made 4 catches for 85 yards and no TDs.

He'll be back in camp in 2021, and nobody will care if he has another good summer. Could the Eagles maybe try him at tight end, as some fans have suggested? He is a willing blocker and (in theory) possesses some tight end traits. I don't think that's crazy idea.

#JimmyVerdict: The bet here is that while Arcega-Whiteside probably shouldn't be back, he will be given a longer look because of his draft status as a former second-round pick. If this team were a contender, then he would not be worth the roster spot. But they won't be a contender, so he may be given one last season to show something, whether that be at receiver or tight end. This will undoubtedly be an unpopular call, but... Stay.

Watkins only played in 6 games, but he showed some juice, particularly against the Cardinals. Remember this nifty little catch and run for a TD?

Hightower played in 13 games, and he actually started four of them, but he never had more than two catches in any one game, and he finished with just 10 catches for 167 yards and no TDs on the season.

#JimmyVerdict: He did have a pair of 50-yard catches, which at least showed some deep ball ability, which is probably enough to put him in position for a roster spot again in 2021. Stay.