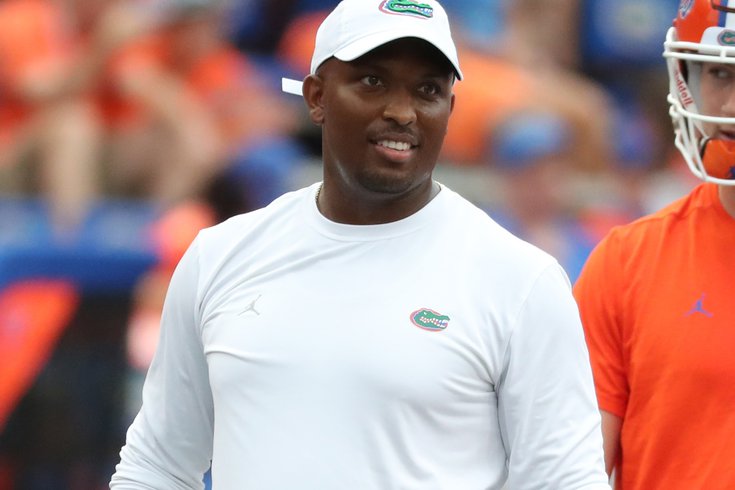 Nick Sirianni is expected to get all the pomp and circumstance when he's finally introduced as the new head coach of the Eagles later this week.

And perhaps Sirianni nails his first impression like a Randy Savage elbow drop reigning down from the top rope.

Either way, the most intriguing member of the brand new Eagles’ staff is not the guy in the big chair, it's 33-year-old quarterbacks coach Brian Johnson for a number of reasons, some more obvious than others.

The former University of Florida quarterbacks coach and offensive coordinator, Johnson stepped off the fast track at the college level to take his first job in the professional ranks by agreeing to work with Carson Wentz and Jalen Hurts.

Mission No. 1 is to [insert preferred transitive verb — fix, rebuild, reboot, rescue or even reach], the one-time face of the franchise, Wentz, who seemed on the cusp of joining the game's elite until a Stage 5 case of stubbornness, first diagnosed by Sirianni mentor Frank Reich in 2016, threatened to kill Wentz's career by the 2020 season.

What we can tell you is that every head-coaching candidate who was interviewed by the Eagles was asked about handing the quarterback position moving forward and the sunk costs of simply writing Wentz off is something Jeffrey Lurie is not prepared to do in a cavalier fashion.

Complicating all of that even further is Johnson's prior relationship with Hurts, the Eagles' safety net and cost-effective insurance policy for the embattled one-time starter at the game’s important position.

You see Johnson has known Hurts since he was 4, played for Hurts' father in high school, and even recruited the Eagles' projected No. 2 as a four-star recruit, not exactly the type of history you may want if you are actually trying to rebuild trust with Wentz, who seems to believe that the organization is out to get him despite $128 million obvious reasons that kind of paranoia is better hosted on a Reddit forum for the unsophisticants right next to stock tips on GameStop.

Admire the commitment of Brian Johnson to get on the ground floor of the Jalen Hurts business, establish trust in the hopes of becoming his position coach at the pro level where he then would unleash his diabolical plan of ignoring the other QB #Eagles pic.twitter.com/M0TrsZSM7c

Next come diversity and ambition with Johnson.

He heads to Philadelphia as the lone outlier on a senior staff where the rest is straight out of central-casting for privileged NFL thirtysomethings that Sirianni has surrounded himself with, a group that includes offensive coordinator Shane Steichen, rookie defensive coordinator Jonathan Gannon, and passing game coordinator Kevin Patullo.

As an African-American who was playing as late as 2009 when Johnson received a rookie minicamp tryout with the Green Bay Packers, some interest from Winnipeg of the CFL before being drafted by the New York Sentinels of the old United Football League, Johnson may have the easier road to connect with locker rooms that are 69 percent Black in this league.

In this particular locker room, where significant parts of it lobbied for Duce Staley to be the next head coach, Johnson could be the invaluable lifeline to help Sirianni earn the trust of many veteran players.

Eagles owner Jeffrey Lurie, meanwhile, gets at least a little breath of air from his awful history of hiring minorities in positions of power on his coaching staffs, all the while paying lip service to that very idea over the past two decades.

While not a coordinator, Johnson is in a position that usually leads to advancement especially if one of his students starts to click, something that segues straight to the ambition part of the equation.

Johnson had already gotten at least two interviews to be a head coach in college — South Carolina and Boise State — so this is a fast-riser who looks at every job as a rest stop to the next one.

Once Johnson's playing dreams didn't materialize, he started his coaching career at his alma mater Utah, where he once backed-up Alex Smith and learned from Urban Meyer. He was the QB coach there for two seasons before adding the OC duties to that for two more. Then he was off to the SEC and Mississippi State, where he tutored Dak Prescott and recruited Hurts while spending three years as the QB coach.

A one-year stop near home in Houston preceded the move to Gainesville, the staging area for Philadelphia.

The sense from a few team sources is that the Johnson hiring has more to do with the macro than the micro.

The Eagles are simply hitching the wagon to a perceived shooting star in the coaching world who's had success as both a position coach and coordinator at the college level with many different QBs all the way up to Kyle Trask last season rather than taking the myopic view of the two QBs in play for 2020.

Whatever happens with Johnson and the Eagles the window is likely a short one. Success means Johnson will be back on the road likely as an OC for his next NFL team and failure means the first step backward for Johnson.


John McMullen is the NFL Insider for JAKIB Media, the host of “Extending the Play” on AM1490 in South Jersey and also contributes Eagles and NFL coverage for SI.com. You can reach him at jmcmullen44@gmail.com