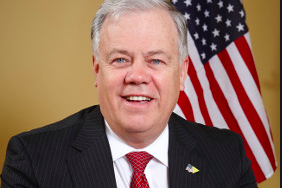 Ray Chintall, a Republican challenger for a township committee seat in West Deptford, reported a death threat to police.

Police in West Deptford, New Jersey, are investigating after former mayor and current township committee candidate Ray Chintall received a death threat this week in the form of an arrow containing a hostile message.

Chintall, a Republican, reported the arrow to police Thursday morning after he discovered it lodged in a window screen on the first floor of his home. When police inspected the scene, they found the arrow and a note that read, "Defending the honor of our mayor/You are a coward/You are dead," according to NJ.com.

Police also found a downturned campaign sign on Chintall's lawn that had been spraypainted over with a swastika and the words "Hitler" and "You are (sic) dead," according to officials.

"I'm really concerned about the safety of my family, of my wife," Chintall said. "They now stepped over the line. Verbal threats are one thing, but when they begin shooting a physical arrow, that could have pierced you in the eye, that's going too far."

West Deptford Police Chief Sam DeSimone said the investigation is ongoing and no one has been ruled out as a suspect, including Democrats, Republicans and outside individuals.

Chintall, who is challenging current West Deptford Mayor Denice DiCarlo for her seat on the 5-member Township Committee, previously reported receiving several typed death threats through the mail in 2012.

DiCarlo stated that she supports the police in their investigation of the threat.