At a childhood cancer fundraiser in Lindenwold, New Jersey, a 1,735 gallon cup of lemonade entered the Guinness Book of World Records 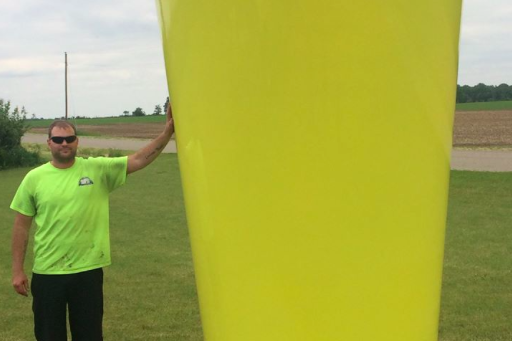 A tall glass of lemonade doesn't even come close to describing the record breaking beverage concocted by a New Jersey family at Lindenwold Park on Saturday.

Eight years ago, Lily Adkins was diagnosed with a rare brain tumor. After receiving treatment at Children's Hospital of Philadelphia and a cancer center in Houston, Lily survived. Every year since her recovery, the Adkins family has hosted an Alex's Lemonade Stand. This year's fundraiser was particularly ambitious, according to CBS 3.

That's because the family served up 1,735 gallons of lemonade in a 10-foot-tall, 6-foot-wide plastic cup. Lily's father was joined aboard a mechanical lift by two officials from the Guinness Book of World Records, who took measurements and declared the new record. The previous record holder was a 1,539 gallon cup, according to CBS 3.

The cup was constructed by APR Fabrications with support from Primus Builders and Republic Refrigeration. Donations to Alex's Lemonade Stand are still being accepted through the fundraiser page.

Alex's Lemonade Stand has raised more than $100,000 million since it was established in 2000, funding more than 475 cutting-edge cancer research projects. Founded in honor of Alexandra "Alex" Scott (1996-2004), the organization aims to raise money and awareness of childhood cancer causes while empowering others to join  in by holding their own Alex's Lemonade Stands.