A 236-pound fish leads the pack at White Marlin Open 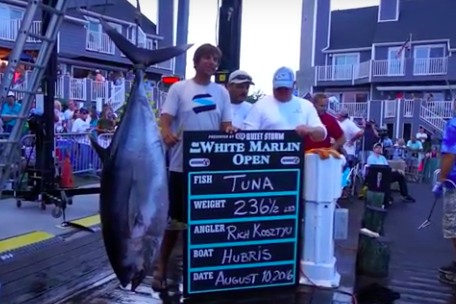 It's not every day that we get to peer into the lives of the men and women who keep our communities safe. Sometimes Philadelphia police get creative in the cutting room and other times a Trenton EMT does "The Whip," but usually the fun we see takes place in uniform.

In this case, we caught the rare example of a free time in the form of a New Jersey police officer and firefighter catching a gigantic bigeye tuna for a six-figure sum.

The trio told NJ.com that they've been fishing in the competition for years and have never caught a fish worth anything near the $767,091 that they received for this year's prize-winning tuna. They set records in White Marlin's tuna category.

Suschke said they got the bite about 80 miles off the coast of Ocean City. They had to fight the fish for an hour before they could bring it aboard Romeo's boat "The Hubris" using a gaff hook. With competition still going for another two days, they waited anxiously and eventually beat out a team that submitted a 233-pound tuna.

The winning tuna and top prize were actually worth $400,000, but the team picked up extra money from promotional buy-ins and the blue marlin winner-take-all.

In total, the 2016 White Marlin Open dished out more than $4.4 million in prize money to 329 competitors. If you want to up your chances of getting rich quick, forget the lottery and learn to fish.