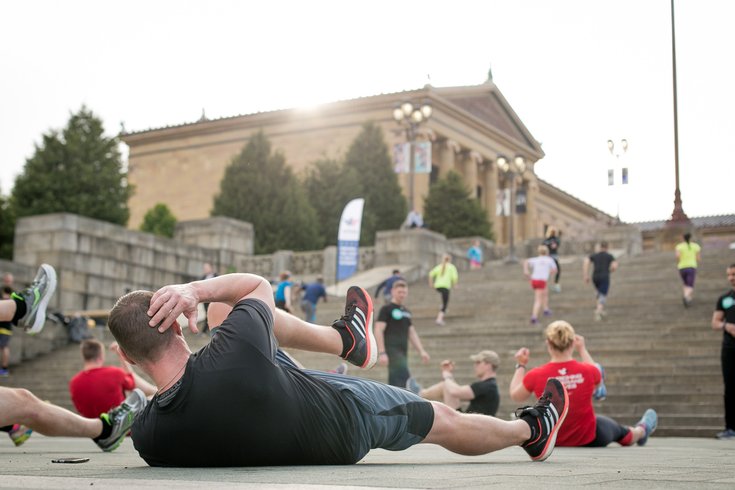 Chris Whittle performs a situp while WeTrain co-founder Zach Hertzel (center, in tan hat) coaches him at a special training event hosted by the Greater Philadelphia Veterans Network on Tuesday, May 10, 2016, near the steps of the Philadelphia Museum of Art.

People who want excuses not to exercise are going to absolutely hate WeTrain.

It used to be that you could say that personal training is way too pricey and way too inconvenient. This startup fitness company based in Philadelphia, however, has crafted an app where you can call up a certified trainer to come to your house at any time, whether it's four in the morning or four in the afternoon.

The obvious comparison is to call it Uber for personal training — but there's no surge pricing. It's a flat membership fee of $50 per month, plus an unlimited number of sessions that cost $15 for a half-hour or $25 for an hour. Virtual sessions are available anywhere, while in-person sessions are offered in Philadelphia and parts of New Jersey.

"If you can do a jumping jack, our trainers can train you, with or without any weights or expensive equipment," said CEO Jon Sockol.

Sockol started the company after his own struggles to get fit. Though now quite trim, he used to weigh 200 pounds, partially because he had a job that required sitting at a desk all day. Even when he was working in finance on Wall Street, however, he didn't want to shell out the money for private training.

Co-founder Zach Hertzel came from the opposite side of the fitness community: He was a trainer in a gym, and before that, served nine years as an Army medic in Iraq and Afghanistan. 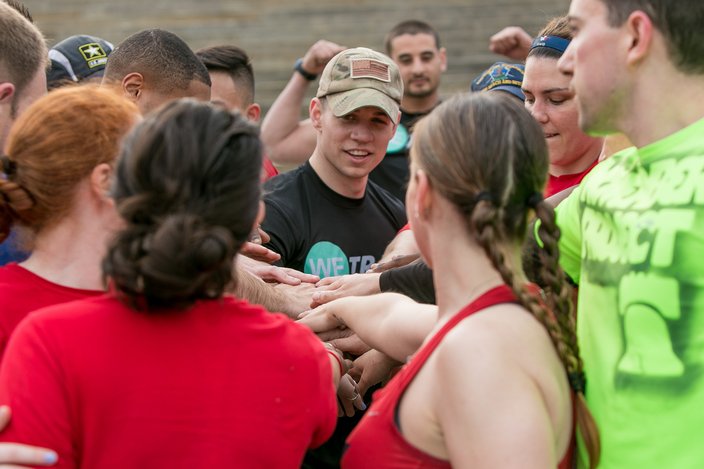 WeTrain co-founder Zach Hertzel, himself a veteran, leads a workout for veterans near the steps of the Philadelphia Museum of Art.

"It was very frustrating because the gyms don't care about how well you treat your clients," said Hertzel.

He said he felt like the gyms where he worked only cared about the question, "How are you going to make them take more money out of their wallet and keep paying us?"

Plus, the majority of a client's fee at a gym goes to that gym, while trainers get paid only around $10 to $15 per training session. Sockol called that "highway robbery."

"Applying concepts from the military, where you reward soldiers based off of performance and based off their dedication to the team and our mission, our mission at WeTrain is to provide the best possible service at the lowest possible price...we reward our trainers and keep them motivated," said Hertzel.

WeTrain fitness trainers get paid significantly more than the national average and also get rewarded for good work through a program called "sweat equity." Each employee can earn points that translate into a percentage of the financial value of the company.

"We're not only paying more upfront cash but also the opportunity to be part of something larger than yourself," said Sockol.

The company started offering its services in February and, for now, offers basic fitness training. It plans to branch out eventually to more specialized fields like yoga and Pilates.

There hasn't been any incident yet where the company didn't have trainers available for someone who wanted one.

"It's very similar to my experience in the military," Hertzel said. "When you think about air ambulance coverage, if someone's injured, there always has to be a helicopter ready to pick up that soldier."

So sorry, soldier, if you wanted an excuse to stay home from the gym.

Correction: A previous version of this article misidentified a person in a caption.