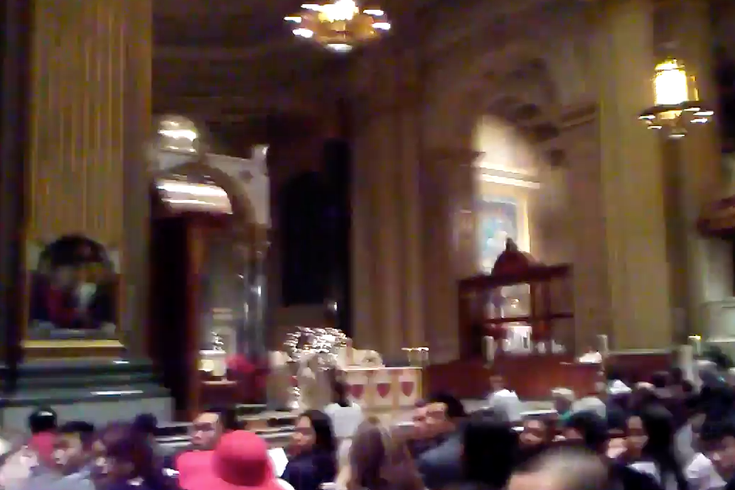 Howard Caplan films inside The Cathedral Basilica of Saints Peter and Paul before lashing out on December 26, 2016.

The Northeast Philadelphia man who gained recognition for hoisting a "Hillary 4 Prison" sign on Roosevelt Boulevard during the 2016 presidential campaign burst into the Cathedral Basilica of Saints Peter and Paul early Monday and delivered a screed against the Catholic Church, invoking the debunked Pizzagate conspiracy theory in the process.

Howard Caplan had already made his fringe views known in November, when he went to Washington, D.C. to protest outside Comet Ping Pong Pizza, the restaurant embroiled by false accusations of covering up a child sex operation run by Hillary Clinton and her former campaign chairman John Podesta.

At midnight mass on Monday, Caplan entered the Center City church and began shouting at the congregation about Pizzagate and its alleged connection to the otherwise well documented child sexual abuse scandals that have rocked the Catholic Church over the last several decades. Eventually, Caplan was confronted and led out of the church while continuing to denounce its history. (Note: Video contains explicit language).

The Pizzagate conspiracy, which appears to have originated on the message board 4chan, took on a dangerous life of its own in the wake of Donald Trump's victory in November. Earlier this month, a 28-year-old man armed with an assault rifle entered Comet Ping Pong Pizza and threatened a store employee before he was apprehended by authorities, fortunately with no injuries.

Threats against the restaurant and its owner have persisted despite the absence of any hard evidence to suggest the Democratic conspiracy is even remotely true.

There was no indication Monday that police became involved in Caplan's disturbance at the church.