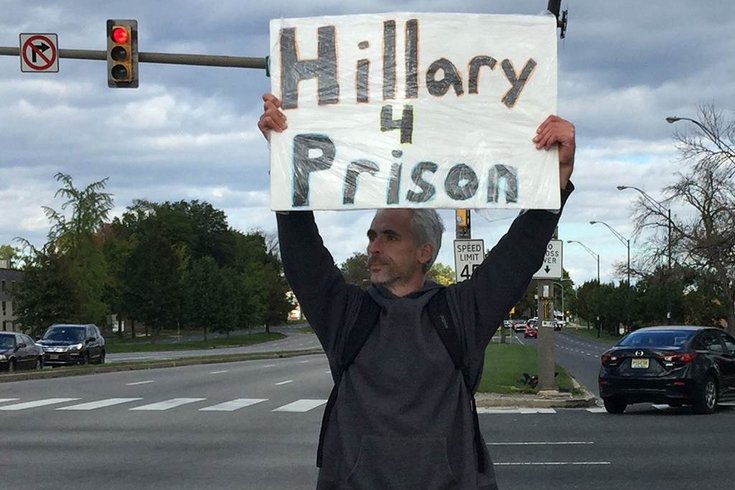 You may remember Howard Caplan from such stories as standing on Roosevelt Boulevard with a “Hillary 4 Prison” sign, casting a vote for Donald Trump, traveling to Washington, D.C., to investigate the "Pizzagate" conspiracy and, just this week, interrupting Christmas Mass with screams about pedophilia.

Yep, he’s heading to the Mummers Parade and, nope, he’s not bound by the sensitivity-training and other edicts layered atop the marching performers.

Before we get into Howard’s plans for Sunday, let’s touch on the online blowback he’s received since his “#xmas gift to #pizzagate community” was picked up by PhillyVoice en route to viral status.

Suffice it to say, many folks took objections to his rolling up into Cathedral Basilica of Saints Peter and Paul during midnight mass.

Their criticisms are easy to find, what with Howard retweeting them and all.

Not a particularly religious guy but holy shit somebody tell this guy pizzagate isn't real https://t.co/R285u2ZhD4

You need to be locked up.

Or drilled in the face. https://t.co/CQghhLyVwG

What an absolute disgrace of a human being. https://t.co/kpumVSDg35

I caught up with Howard on the phone Thursday morning to talk about the reaction to his actions, and his Sunday plans.

Here’s a transcript of a five-item Q&A:

What do you think of the blowback from the Pizzagate Mass?

I have Twitter trolls I’ve never seen before. There’s an entire group of them, and I’m learning they’re all part of the same thing. One of them told me that ‘we’re all paid to do this.’ I don’t know if they were being genuine or not, but that’s f------ obvious. They’re filling my entire timeline; I’m trying to figure out how to delete them all.

What I’m really pissed off about is people writing about me, calling me unhinged, without even bothering to ask me questions first.

Many, even most, people have dismissed “Pizzagate” as a crazy conspiracy theory. Why are they wrong?

It’s like that Gandhi quote: First they mock you ...

They’re trying to mock it all, and us all. But I don’t know how anybody can look at these terms and not see that they’re code words for what they do.

Fine, we can’t necessarily prove it, but if you read these emails, what else can it possibly be? There’s an email from a global defense company in Texas that says someone needs to know who’s in the office today because we’re having pizza, there’s only one slice and they needed to know how thinly to slice it. Brian, have you ever had pizza at the office and there’s only one slice for everybody to share? C’mon, man.

I know some different stuff that I haven’t put out yet. I’m waiting on that. I didn’t discover it; it was given to me. This is bigger than Comet Ping Pong and pizza unfortunately.

The reason a lot of people are coming at me like this is because they’re in on it too. They all know. You want to call me crazy, a lunatic? Fine. But eight million children go missing worldwide every year. Where do they all go? There’s state-by-state data, too, and a lot went missing in Virginia. Where did they all go?

So, what are your plans for the Mummers Parade and weekend?

I’m going to do what I do normally: Make a sign and try to get on TV. It’s going to be hard to miss me. If I can get up early enough, I’m going to stop by the church again, too. I didn’t like the way they touched me. I need to see what time Mass is that morning, though.

Is this a Hillary or Pizzagate message?

Pizzagate. Hillary’s done. Something’s not right about the numbers on how much she won Philly by (in November), though. The numbers mean I saw just about everybody who voted for Trump when I was out on the Boulevard, and that can’t be right.

So, you’re not saying the Mummers are involved in any of this Pizzagate mess, right?

I’m just going there because it’s the best spot to get on TV on New Year’s Day.