Why so many go missing in Camden 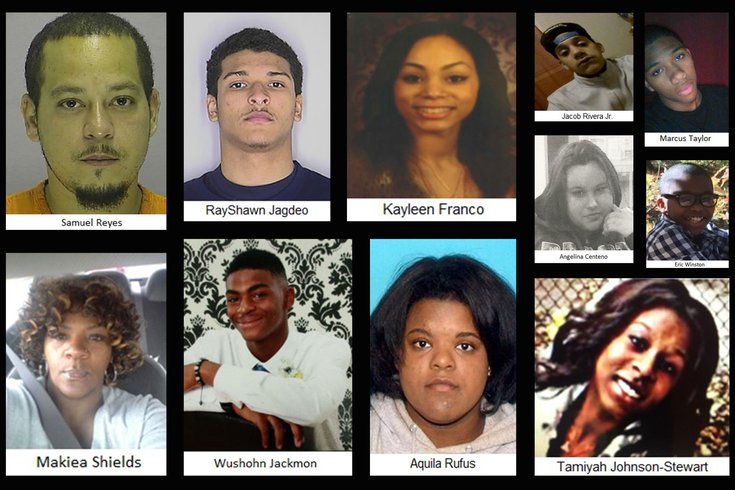 The selection of the people who went missing in Camden in May.

Sgt. Janell Simpson is in charge of finding missing people in Camden, a city that averaged roughly two cases a day last year.

“We are well-oiled machines in missing persons because we do it every day,” said Simpson.

People go missing in Camden at more than twice the rate that they do in Philadelphia, according to the most recently available set of statistics. In 2014, 616 people were reported missing in the city, which is a rate of 7.7 per 1,000 residents, according to the department.

By comparison Philadelphia had a rate of 2.8 per 1,000 residents, according to 2013 data, the most recent available.

And in 2014, Camden saw a 20 percent increase in the number of missing people reported, a trend that is resisting the generally hopeful news out of the city. The murder rate, for example, dropped 42 percent in 2014 compared with the previous year. Incidents of violent crime declined from 1,950 to 1,550 over the same period.

Michael Daniels, a spokesperson with the Camden County Police Department, said the increase is at least in part due to people feeling more comfortable reporting their loved ones missing to police in recent years.

In addition, Simpson said there's been an increase in the number of adults, not all from Camden, reported missing. Drug addiction or prostitution may be behind that upswing, she said.

“A lot of people from out of Camden, out of town, they come in to use drugs,” Simpson said. Those kids from out of town may then be reported missing by loved ones, triggering a search by Camden police.

And police have a network of people who are plugged into the community who can assist with a search. If they fear, for example, a missing woman from out of town might be prostituting herself, Brenda Antinore may have seen them.

“I get calls, I get emails, ‘have you seen this person,’” said Antinore, who runs the Christian charity “She has a Name” in Camden.

Antinore spends much of her time dealing directly with women who are soliciting. She said if she finds a missing person through her contacts on the street, she would immediately pass the information on to the police.

"If we had been in contact with a family member of the missing person, we would also notify them," said Antinore.

The process for finding a missing person often expands the longer they are gone and the more danger they may be in. Earlier this month, a mother told her family she was going to visit her boyfriend. She then missed work. This was highly unusual, the family told police. And then the boyfriend said the two had never met up.

“So that was kind of alarming,” Simpson said.

Police spoke with the family and located the boyfriend, who was from out of town. He consented to a search of his home and vehicle. Then he sat with police for a two-hour interview “just to make sure that we knew he wasn’t lying and he didn’t do anything with her,” said Simpson.

She was only missing for a couple of days before returning home. Within that time, they checked to make sure she hadn’t been arrested somewhere and that she wasn’t in a local hospital. Detectives even contacted a restaurant in Philadelphia frequented by the couple.

Police did not say why the woman went missing but if she had stayed away longer, they would have taken out search warrants and broadened the effort.

Simpson said it is important to find people fast. She always assumes the person being looked for is in danger. And not all stories end well. There are 11 cold cases in the city - Simpson can recite the names.

“We do have missing and then we find them and then they are deceased,” said Simpson. Some may have committed suicide or been killed. She remembers the case of Fatima Perez who was killed last year after leaving home with about $8,000 to buy a car. Two men were charged in her death and accused of burying her alive.

“It is not always a happy ending,” Simpson said.

Still, she said in that case the police acted quickly, which may have helped find the two suspects.

“If we didn’t [find her] it could have been forever and we would have never found a body," she said.

“To some people, it’s closure.”