Nutter enjoys DNC in his role as ex-mayor of Philly

Michael Nutter has now been on two sides of the Democratic National Convention: Both as a mayor and ex-mayor of the 2016 host city.

The Democratic National Convention announced it’d be coming to town on his watch, and when it finally did, “ex” preceded his mayoral title.

But at 5:20 p.m. on the night that Hillary Clinton would formally accept the Democratic presidential nomination, he took the stage in a moderately filled Wells Fargo Center to tout the candidate he supports.

“Philadelphia is my town, and there’s a tremendous pride knowing that here, in the city of so much history, I’ll cast a ballot for our historic nominee, Hillary Clinton,” he said during his five-minute speech. 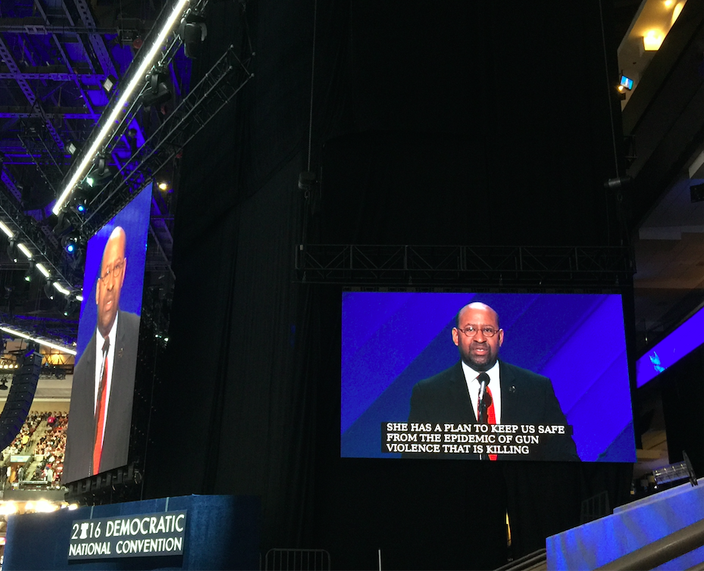 He cited the acronym “GSD" – short for “get stuff done” – and said that's something mayors are expected to do even when their neighbors bring issues to their inbox. After rattling off a litany of issues that he maintained Clinton was better to address, he chided Republican nominee Donald Trump as someone without plans to push the country forward.

The presidency requires for intellectual depth than that needed to construct a 140-character tweet, he said.

“Hillary’s plans have details, because details matter,” he said. “Trump says he has a plan, but when you’re looking down from the top of Trump Tower, you can’t see details because they don’t exist.”

He urged delegates to work to protect “eight incredible years of progress” under President Barack Obama which can’t be permitted to erode under a “con man who thinks the presidency is an entry-level position on ‘The Apprentice.”

After he spoke on stage, Nutter told PhillyVoice that he knew when the decision to pursue the DNC started, he wouldn’t still be serving as Philadelphia’s mayor this week. But on the heels of Pope Francis’ visit last September, he’s proud that Philadelphia is again in the international spotlight.

“It’s been a very special event, and all across the world, people are now seeing how special Philadelphia is,” he said. "In fact, I'm probably having more fun here now that I'm not mayor. It's been a great time for the delegates and the city itself."