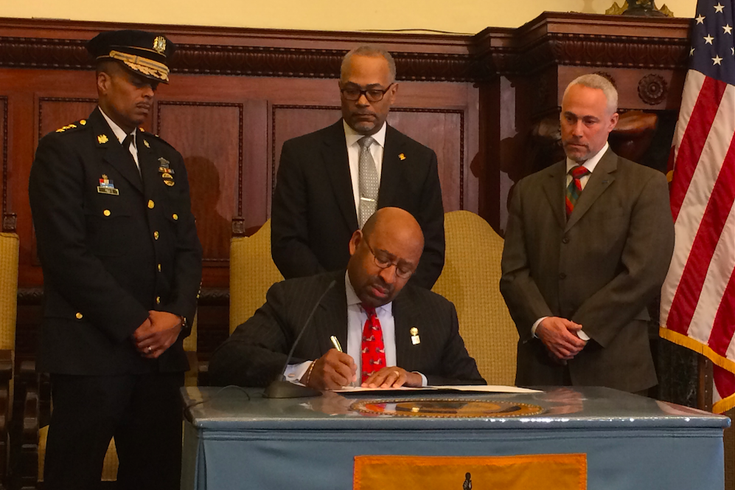 A day after the Department of Justice released a report with a series of recommendations aimed at fixing deficiencies in the how Philadelphia's police department uses lethal force, Mayor Michael Nutter signed an executive order Wednesday establishing a task force that would oversee the implementation of reforms.

The task force will be headed by former assistant U.S. Attorney and current Temple Law School Dean JoAnne A. Epps and will report to the mayor’s office.

This will not be her first time involved in police-oriented public policy. In 2011, Epps was the court appointed monitor who oversaw the city's compliance after a settlement was reached on federal class-action lawsuit regarding the police department's stop-and-frisk procedures.

"I am honored that the Mayor has called on me to serve the City of Philadelphia in this capacity," said Epps in a statement. "I hope that my experience working with the City and the police in the stop and frisk litigation will enable me to contribute to everyone’s goal of effective and respected policing."

Nutter said that it was important that the city take the next steps towards implementing change.

“It is clear that changes need to be made with regard to the use of force and certainly lethal force,” said Nutter at a press conference at City Hall. Along with some members of his administration, he was accompanied by Richard Ross, the police department’s deputy commission of police operations.

The task force will not just look at the Department of Justice report released on Monday but will also utilize recommendations in the President’s Task Force on Twenty-First Century Policing. That national task force was chaired by Philadelphia Police Commission Charles Ramsey.

The Department of Justice report said the city’s police had averaged about one police-involved shooting a week between 2007 and 2013, although that number dropped significantly last year. The report found that better training was needed, the process for investigating incidents required an overhaul and more public accountability was necessary.

Ramsey called for the Department of Justice to review the city’s police procedures in 2013 after a spike in police involved shooting the year before.

The task force "will be an independent committee composed of community stakeholders, experts in the field of law enforcement and public safety professionals" not affiliated with the Philadelphia police department.

Nutter said forming the task force was meant to ensure changes to police procedure are adopted in a timely and proper manner.

The other members of the board have not yet been announced.

“The main issue here today is we received important info we asked for,” Nutter said referring to the Department of Justice report adding that now it was important “not only [to] pay attention to it but also [to] make sure things are implemented.”