Before successor named, Nutter talks about his tenure's 'end date'

Being mayor was 'the most incredible experience of my professional life,' he says 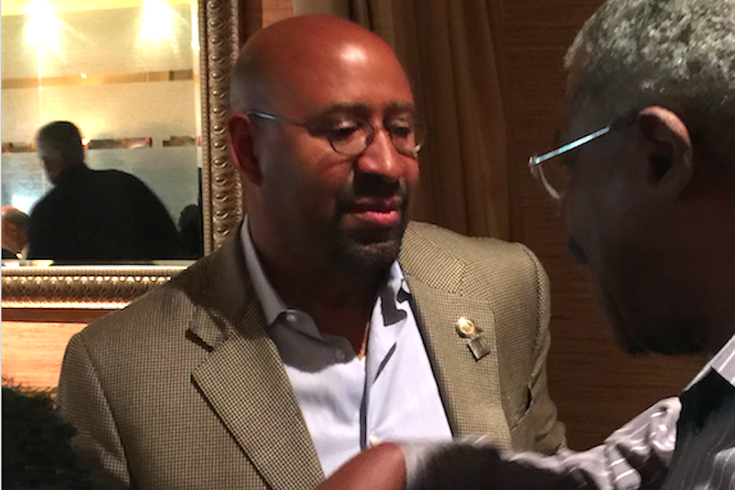 As part of a burgeoning tradition, droves of elected officials and candidates flocked to Relish restaurant in West Oak Lane for an Election Day luncheon in state Rep. Dwight Evans’ neck of the woods.

A steady stream of officials made its way to the WURD-AM live-broadcast table upon entry, while the dining rooms were filled with attendees sampling on some fine Southern cuisine.

It was amid this scene that a tie-less Mayor Michael Nutter spoke with PhillyVoice about what it felt like for him on this day when his successor will be officially named after votes are counted in a few short hours.

If a sigh of relief took on human form, that was the vibe Nutter was giving off.

“I like to think of it as a relay race. We’ve ... made the city a better place and I’m ready to smoothly hand the baton to Jim Kenney.” – Mayor Michael Nutter

Eight years after starting Election Day in his dining room with a couple [of] reporters there to chronicle the biggest day of his political life, Nutter said he’s taken ... many steps to stave off this becoming a shock-to-the-system moment.

Nutter said his administration quietly launched transition efforts early in 2015, knowing the inevitability of what was to come.

“When you’re elected mayor, a term-limited position, you know you only have four or –  if you’re lucky – eight years until you know it’s coming to an end,” Nutter said. “You know you have an end date.”

He also urged people in his administration to not take it personally when programs they’ve overseen get attacked during the campaign season. Campaigns, he said, have a different language and the people doing the attacking aren’t doing so on a personal level.

That’s not to say Nutter didn’t show any signs of wistful longing on Tuesday. He did get a wee nostalgic, but that was tempered by the fact that May’s primaries marked the first time in nearly 30 years that he wasn’t a candidate on the ballot.

“Being mayor has been the most incredible experience of my professional life. It’s changed my life forever,” he said. “I’ve tried to lead by this line in the Athenian Oath: ‘We will transmit this city not only, not less, but greater and more beautiful than it was transmitted to us.’

“My hope is that people look back on my tenure and agree that – with no slight to previous administrations – that the city is safer, more educated, has more money and jobs and a greater integrity than it was before we came in. Those are the things I said we’d set out to do eight years ago, and I think we’ve done them.”

Without getting into any plans for his future – don’t worry: we’ll have a chat with him about that for a post in the near future – he spoke about his overarching view of what today meant.

“I like to think of it as a relay race,” he said, confidently. “We’ve ... made the city a better place and I’m ready to smoothly hand the baton to Jim Kenney.”