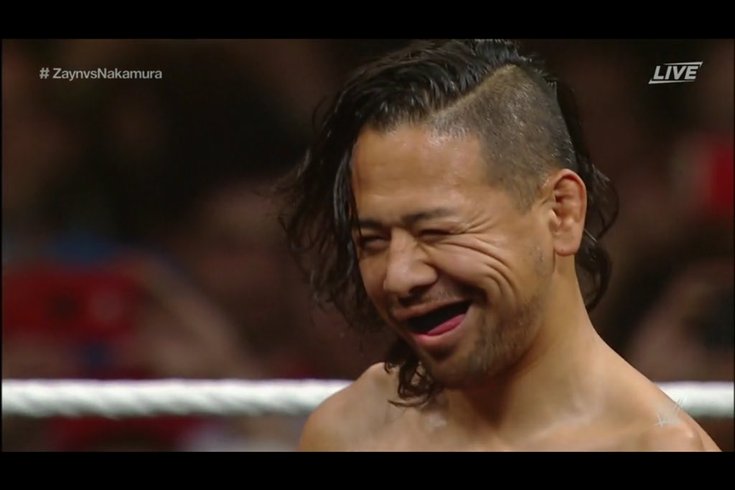 Shinsuke Nakamura’s debut in NXT against Sami Zayn could be in the running for Match of the Year.

In what many wrestling fans view as the true WrestleMania of the weekend due to the popularity of NXT, the developmental brand of WWE that’s not so developmental anymore invaded the Kay Bailey Hutchison Convention Center in Dallas two days before the biggest event of the year to put on one of the best wrestling shows I’ve ever seen.

It seems like I’ve said that a lot about NXT in the past, but that’s simply because it’s true. Each special event NXT has put on has topped the previous one, and

Here’s what went down at NXT TakeOver: Dallas on Friday night:

The long road to the NXT Tag Team Championships for Jordan and Gable ended last night in Dallas. In a fantastic opening match, the “new Team Angle” defeated Dash and Dawson for the tag team titles.

It was your prototypical tag team match with the face in peril at the hands of the heels, the hot tag and eventual hot finish. There was a moment during the match when it looked like Dash and Dawson were going for a double team move, but it crashed and burned badly.

Lucky for them, it was the only mistake in the match. Everything else worked flawlessly. In NXT, I’m used to saying that a lot. Attention to detail is something NXT is known for, and they rarely disappoint. Dash crawling under the ring to the other side and taking out Jordan to prevent a hot tag from Gable was the highlight of the match for me until the ending.

Jordan speared Dawson in the corner, tagged in Gable and the two hit their double-team finisher, Grand Amplitude, to win the NXT Tag Team Championships.

Those guys should hold on to those Tag Team Titles for a long, long time.

Corbin had attacked Aries during his television debut in NXT, so that was basically the story for this match. Aries looked like he didn’t miss a beat from his TNA days, but that could be because he’s been wrestling in NXT for a couple months already.

Corbin is a good character for NXT to have, but he just keeps losing. He’s NXT’s version of Bray Wyatt at this point. Not necessarily a terrible thing, but I just can’t take him seriously anymore. Aries won the match after countering Corbin’s End of Days finisher and rolled him up for the victory.

The crowd response for Nakamura was way more than I could have imagined. One of the biggest wrestling stars in Japan in a WWE ring was so surreal that the crowd couldn’t keep from chanting, “This is awesome!” before the match even started. And the fact that Nakamura was taking on Zayn made fans everywhere eager in anticipation for what was to come.

And this match lived up to the hype. It might have even exceeded expectations. Both guys were stiffing each other on punches and kicks that there was a moment where I thought they both were going to bust each other open. That didn’t happen, but it didn’t make the match any less memorable.

Nakamura won after hitting the Bomaye twice on Zayn, once to the back of the head off the ropes and then another to his face.

Match of the Year candidate already? I think so.

Everything about Nakamura was flawless Friday night. The entrance, the beginning of the match, the duration of the match and even after the match when he and Zayn shook hands was done perfectly.

After the match, the crowd gave Zayn a standing ovation, in what was likely his sendoff from NXT as he’ll now become a full-time member of the main roster.

I think they should introduce a secondary title in NXT and give it to Nakamura as soon as possible. A Television Title? A WWE Network Title? Make it happen, Triple H!

Another huge match on the card and one that had serious implications on both the NXT and WWE main roster occurred on Friday night, with Bayley defending her NXT Women’s Title against Asuka. Asuka has been blazing through NXT’s Women’s Division and finally had her shot at becoming the Women’s Champion. She didn’t disappoint. Bayley and Asuka played off each other’s strengths beautifully and this quickly became one of my favorite matches of the year.

Bayley is NXT’s woman version of John Cena. She’s super nice and everything, but the fans actually love her. So her tapping out via submission was never an option. Asuka had the crossface chicken wing on her and she passed out from the pain. Yes, it’s possible to pass out from pain while not getting choked out.

Bayley was devastated after her loss.

izzy has been carried out of the arena by her dad 😢😢😢😢😢

As for Asuka, she’s just at the beginning.

She’ll be holding onto that title for a long time.

If one of these guys was getting called up to the main roster after WrestleMania, my guess would have been Bálor. After Friday’s championship match between him and Joe, now I’m not so sure.

Early in the match, Joe was busted open and the match had to stop several times for the doctor and referee to try and close up the wound. This didn’t make Joe, the crowd, or me happy. And that’s not because I don’t care about the health of the individual. But ruining the flow of a NXT Championship match because of a cut near Joe’s eye really lost a lot of the heat from the crowd. Luckily, Bálor and Joe are so good at what they do, they were easily able to get that heat back once Joe’s cut eventually stopped pouring blood.

The end of the match channeled the ending of the Intercontinental Championship match between “Rowdy” Roddy Piper and Bret “The Hitman” Hart at WrestleMania VIII, as Joe had the Coquina Clutch on Bálor, but the champion kicked his feet up on the turnbuckle and used his momentum to pin Joe who couldn’t let go of the submission hold.

And we have our first champion retaining his title on the night.

I’m surprised Bálor retained here and the show went off the air soon after, but that just makes the anticipation for perhaps WWE’s version of The Bullet Club happening in the future even bigger.

This show, from top to bottom, was one of the best shows I’ve ever seen. I’ve said that before about NXT shows. It’s absolutely amazing how they can almost outdo themselves every show. Nakamura’s debut, the women’s match and the great ending of the NXT Championship match were great, and I think the tag team match will be underappreciated over time. It was one of the best tag team openers I’ve seen and utilized everything that makes professional wrestling great.

Will Joe go to the main roster now? What happens with Bálor now? Is NXT Nakamura’s domain now?

Kota Ibushi was in the house for TakeOver, and the rumors are flying that he’ll be involved in WWE Network’s Global Cruiserweight Series later this year. He hasn’t been confirmed, but it’s very likely he’ll be a part of the series.

Bobby Roode was also in attendance in Dallas on Friday night. Will he sign with WWE? I hope so.

Jim Ross and Michelle Beadle were also seen at TakeOver sitting next to each other.