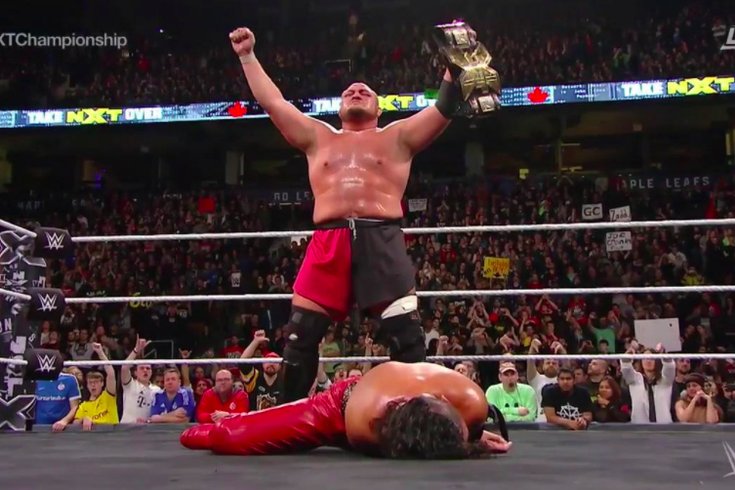 Samoa Joe gave Shinsuke Nakamura his first NXT loss in Toronto on Saturday night and made history along the way.

For the first time, NXT’s TakeOver event crossed the north border into Toronto, Canada at the Air Canada Centre. The Toronto crowd is always known for being loud and raucous, and it didn’t disappoint on Saturday night.

In fact, it was one of the better crowds we’ve seen recently, as the chants were humorous and they didn’t try to take away the spotlight of the matches in the ring. That rarely ever happens in NXT, anyway. Sunday night during the Survivor Series may be a different story.

Here’s the rundown of what went down at NXT TakeOver: Toronto on Saturday night:

There’s one word to describe this opener: glorious. From Bobby Roode’s entrance, which featured an actual choir singing his awesome theme song, to the psychology of the match to the ending, this was one of the finest opening matches you’ll ever see at a wrestling show.

The crowd chanted “10!” plenty of times due to Dillinger’s gimmick being “The Perfect 10.” The crowd became unglued once Dillinger locked in The Sharpshooter, but Roode was able to get to the ropes. Dillinger had the crowd believing he legitimately had a chance to beat Roode, but once Roode shoved him into the ring post and hit him with the Glorious DDT, that was all she wrote.

After the match, the Toronto crowd gave Dillinger a standing ovation as he left the ring and walked to the back.

The manager of the Authors of Pain, Paul Ellering, was locked in a cage above the ring so he didn’t get involved in the match at all. While it’s worth noting Ellering hasn’t really been involved in many of the matches his team has been involved in [with the exception of the match against #DIY], this was sort of a call back to the Last Battle of Atlanta, which was added to the WWE Network as part of its “Hidden Gems” collection back in September.

In the Last Battle of Atlanta, Ellering was suspended above the ring as Buzz Sawyer and Tommy Rich settled their difference inside a steel cage.

TM61 had the momentum for a good portion of the match, especially when Shane Thorne dove off the steel structure holding Ellering’s cage in place. TM61 would eventually hit Rolling Thunder, but that didn’t get them the win. Ellering tossed a steel chain in the ring for one of his men to use it, but it went into the crowd after one of his team members tried using it. While TM61 had the momentum after that, it was only for a split-second as the Authors of Pain his The Last Chapter to win the second annual Dusty Rhodes Tag Team Classic.

Your winners of the 2016 Dusty Rhodes Tag Team Classic: The Authors of Pain

Johnny Gargano and Tommaso Ciampa came so close to capturing the NXT Tag Team Championship from The Revival back at NXT TakeOver: Brooklyn II in August. On Saturday night, they were given a second chance to dethrone the first-ever two-time NXT Tag Team Champions. This time, it would be in a two-out-of-three-falls match where the winning team would be declared after winning two falls.

Winners of the first fall: The Revival

Usually, in these types of matches, the heels will win the first fall, the faces the second falls and the third fall is up for grabs. But in this match, it almost took on the label of unusual as the champions kicked out of everything thrown to them by Gargano and Ciampa. A Fameasser, three german suplexes and the Shining Wizard couldn’t get the job done for #DIY, so many probably thought the champions would eventually retain in two straight falls.

Lucky for us, that didn’t happen. Gargano and Ciampa hit their running knee and superkick combo on Dawson to claim the second fall.

Winners of the second fall: #DIY

After two great falls, I asked myself how these two teams could top themselves for the third and final fall.

I got my answer rather quickly.

After Gargano started the fall strong, the champions regained control after Dawson brought in a tag team title and, with the ref’s back turned, Wilder held it up as Gargano tried kicking him, so Gargano could strike the hard gold instead. Wilder, being the ring veteran he is, locked in the same submission maneuver that won them the match in Brooklyn in August. The crowd was heavily involved and did not want this to happen, and Gargano relieved everyone’s fears as he finally got to the bottom rope to break the hold.

Earlier in the match, Wilder and Dawson hit #DIY’s signature running knee and superkick combination, but it didn’t get them the victory. Later on, #DIY hit The Revival’s Shatter Machine after a flurry of back-and-forth action, but were not successful. But the finish wasn’t that far behind.

Gargano was finally able to lock in the Gargano Escape to Dawson, and Ciampa prevented Wilder from breaking the hold by locking him into a painful-looking armbar. The champions stayed in those holds for 10-15 seconds, holding each other’s hands and trying not to tap out before finally succumbing to the pain and both submitting at the same time as the Toronto faithful went nuts.

That was one of the best endings to a professional wrestling match I’ve ever seen. From the wrestling to the storytelling to the drama at the end, that was just picture-perfect. Both teams deserve a spot on the main roster after that one.

In Mickie James’ first match back in WWE since 2010, she had the tall task of facing one of the fiercest women’s wrestlers on the planet in Asuka. Before the match began, the crowd began chanting, “Asuka’s gonna kill you!” and I’m sure James was just thrilled to hear that.

But she wasn’t afraid. James took it to Asuka and the two had a really good match together. James looked impressive in her return and it wouldn’t surprise me if she stays on in either a talent role or producer role behind the scenes with either NXT or one of the main rosters. She’s that good.

And Asuka is that much better. It amazes me how she can adapt to anyone’s wrestling style. She’s going to be a lot of fun to watch on Raw or SmackDown eventually. James had Asuka on the ropes a few times - literally - as Asuka had to reach the ropes during a pin attempt to keep her title from switching hands. Eventually, Asuka was able to lock the crossface chicken wing on James and forced her to submit.

While Samoa Joe’s entrance was all business, Shinsuke Nakamura’s entrance had many people playing his theme song on violins and even dancing around him when he made it inside the ring. The guy is a superstar. He should be on one of the main rosters already, but I’ll continue taking him on these NXT shows before WWE’s main creative teams have the chance to slowly ruin what makes him so special. The same goes for Joe.

The match began in knock-down, drag-out fashion as both Joe and Nakamura tried to gain the upper hand by brawling. The brawl spilled outside and eventually into the crowd, but they found themselves back in the ring shortly after.

The stiff match reached a climax when Nakamura hit the Kinshasa a couple times, but Joe would fall to the outside of the ring. Being the competitor he is, Nakamura didn’t want to win the match by countout and went the outside to grab Joe. Joe shoved the referee out of the way as Nakamura charged, and hit him with a low blow and then a Rock Bottom onto the steel steps at ringside. Joe got the champion back in the ring and gave him a second Muscle Buster to regain the NXT Championship for a second time.

That would be Nakamura’s first loss since joining WWE. While I’m very surprised he dropped the title, I don’t think this is an automatic slam dunk that he’s being called up to the main roster right away. WWE’s been fairly notorious for holding out at calling up talent. I just don’t see where Nakamura fits right now on the main roster, but him joining the main roster quickly wouldn’t necessarily surprise me.

I think there’s a good chance Nakamura wins the title back in Japan when NXT tours there in early December. The crew stops in Osaka on December 3rd and it would be perfect to have him win the title back there if they plan on keeping him in NXT for a while longer. It’s almost a double-edged sword, because now Joe will remain in NXT as the champion instead of being on one of the main rosters full-time.

NXT TakeOver: Toronto was a great event that didn’t have one bad match. NXT shows usually don’t have bad matches, but all of the ones on this card were on a scale from good to great. Nothing was average. And that’s what I love about NXT. The talent is hungry to produce great matches for the fans. That’s something that won’t leave NXT regardless of how many brands WWE has.

Check back in Monday morning for your entire Survivor Series roundup.