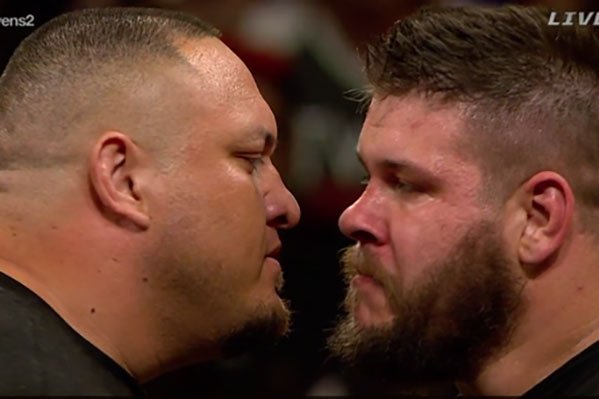 WWE’s minor leagues, NXT, took center stage once again Wednesday night on the WWE Network for a special live event from Full Sail University in Florida, and it was anything but minor. Consistently credited as WWE’s developmental system for producing the superstars of tomorrow, NXT has continuously outshone the main roster in terms of in-ring product and storytelling and Wednesday night was no different.

With one of TNA’s former stars finally debuting under the WWE product on the same night that we found out Destination America has canceled TNA’s Impact Wrestling program, it was almost bittersweet to see one product get so much better while the other continues to fail miserably.

Dave Meltzer of The Wrestling Observer noted Wednesday night during the NXT special that Destination America, a station owned by The Discovery Channel, has told TNA officials and their president, Dixie Carter, that it will discontinue airing episodes of their flagship television program, Impact Wrestling, effective come September.

Whether this means the end for TNA or another chance at landing with another network remains to be seen, but it has to be salt in its wounds to see one of its biggest stars that it let go a few months ago show up in WWE and looking in peak physical condition. Let alone setting the stage for an eventual Joe/Owens matchup – possibly for the NXT Championship if Owens still has it – down the road.

Yes, it was quite a night to be an NXT fan.

#1 Contender’s Match for the NXT Championship

This was supposed to be a Triple Threat Match with Hideo Itami also participating, but WWE decided to wait until hours before the program to officially count Itami out of the match, as he suffered a legitimate torn rotator cuff a few weeks ago. Since NXT is taped well in advance, there wasn’t reason for WWE to mention Itami’s injury until this week.

Balor’s entrance when he’s wearing his body paint is absolutely amazing – it actually rivals the Undertaker’s entrances through the years. With the entire crowd being into it along with Balor’s ability to just make it feel special, there hasn’t been an entrance of his akin to this that didn’t end in a “This is awesome!” chant from the crowd.

I’m not sure there’s been a terrible match that these two have been involved in, and Wednesday night was more of the same. While I never seriously consider Breeze as a serious contender to the NXT Championship anytime soon, there were some cool moments that made me think he had a chance to win the match. But Balor is just the better option at this point to challenge for the title and possibly even win it, if Owens is headed for the main roster soon.

Your winner and #1 Contender for the NXT Championship: Finn Balor by pinfall via the diving double foot stomp from the top rope.

Charlotte and Bayley vs. Dana Brooke and Emma

The best thing about NXT the last few years has been its ability to produce top-notch quality women’s wrestlers, and some of the best were on display in this tag team match. While the finish looked a little sloppy, it’s still a lot better than what we see week after week on Raw and SmackDown, so I won’t be too hard on the women for working hard and putting on an entertaining match. This may have been the worst match on the card and that’s saying something – because it wasn’t bad at all.

Your winners: Charlotte and Bayley by pinfall after Charlotte hit Emma with the Natural Selection.

This happens to be a good ol’ fashioned grudge match. Rhyno returned to WWE and has been prominently featured on NXT the last few months, but this match resulted from a challenge by Rhyno himself to Corbin. Rhyno has shown that he can hang with the superstars of tomorrow despite being up there in age, and Wednesday night, he helped put on another good match that told a good story and elevated Corbin by putting him over. Rhyno looks comfortable in NXT and doesn’t look out of place at all. I still love the “Gore!” chants from not only the crowd, but the announcers as well. Alas, we saw no gores Wednesday night, as Corbin walked away with the win.

Your winner: Baron Corbin by pinfall via the End of Days.

A touch of @AlexaBliss_WWE for Blake and Murphy at @WWE #NXTTakeover! http://t.co/NNo1qbLMPC

If there’s one thing I love about NXT, it’s the attention to detail each match seems to always possess when you’re least expecting it. The tag team scene has cooled considerably in NXT, but that doesn’t mean it’s bad. The matches aren’t of the must-watch variety, but this match was perfectly booked for the story the characters were telling in the ring, and the right outcome happened. I’ll admit I was hoping for a title change just because, but just because I want something isn’t a good enough reason for it to happen. Amore and Cass are so over with the crowd that I think they eventually will win the Tag Team Championships, but it’s about what they do afterward to keep that connection with the crowd that will mean the most.

.@SashaBanksWWE knows how to make a "statement" with style at #NXTTakeover! @BeckyLynchWWE pic.twitter.com/2GJgkzSwOW

Lynch came out with a new look, and she looks spectacular. Banks has been trying her hardest to just be the “bad girl,” but it’s hard to do when the entire crowd keeps cheering for her. She did a fine job during the match getting the crowd to turn on her, and both women told a great story throughout the match. In fact one could argue Lynch is now the uncrowned Women’s Champion since she actually had Banks pinned and she didn’t kick out in time, but the referee stopped counting anyway.

Your winner and STILL NXT Women’s Champion: Sasha Banks by submission via the crossface.

Kevin Owens came down to the ring wearing a John Cena United States Championship t-shirt, which was perfect. As the two start the match, the crowd breaks into a “John Cena sucks!” chant to the tune of his theme music. Almost immediately after, the crowd breaks into an “Ole!” chant for Zayn. Absolutely hot crowd for a great card and they’re certainly anticipating a great main event. And Zayn and Owens delivered.

Both men once again did the powerbomb on the ring apron spot with Owens slamming Zayn on the side of the ring. Zayn, who wasn’t moving at all while on the ground, was attacked various times by Owens on the floor while more refs came out and tried to stop him. Still holding his shoulder, Zayn continued to get massacred by Owens, along with NXT general manager, William Regal, who tried to stop him.

Your winner: I’ll call this a No Contest since there was never an official decision to stop the match and award it to Owens. Owens remains your NXT Champion.

By then, the crowd was completely deflated – until one man made his long anticipated NXT debut. Samoa Joe’s music hit and he made his way to the ring to face off with Owens. His shirt said Samoa Joe, so it looks like for the time being, he’ll keep his name. He looks in great shape and looks to have lost a lot of weight since leaving TNA. I’m sure Triple H had a lot to do with that.

Owens backed away and walked back up the ramp while Joe took in the crowd’s chants for him. Owens came back down the ramp a couple minutes later only to say, “not tonight” and walk to the back again.

Joe addressed the crowd after the show went off the air.

It was without a doubt one of the best NXT events I’ve ever seen, and each time I’ve seen one, I’ve said the same exact thing afterward each time. NXT continues to allow its brand to explore what’s missing in professional wrestling nowadays.

The roster currently boasts world-class talents like Kevin Owens, Sami Zayn, Samoa Joe, Finn Balor, Hideo Itami, almost all of the women wrestlers, and some tag team wrestlers as well. The talent that’s been developed and is currently being developed in NXT can easily make TNA a must-watch wrestling program and give WWE’s main product a run for its money.

WWE is lucky enough to have them under their umbrella, and if they want their long-term success of the company to set some more records financially, It’ll hang onto it as long as they can.

I hope you enjoyed the NXT special, and I’ll be back tomorrow morning with your SmackDown rundown.