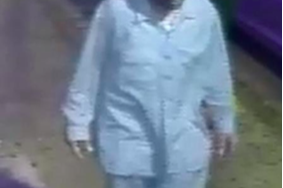 Person of interest Center City fire on Tuesday, September 15, which has been ruled an arson.

Officials are offering a $5,000 reward for information about a fire that broke out in Center City early Tuesday morning, which investigators ruled Thursday was an arson.

The Philadelphia Field Division of the Bureau of Alcohol, Tobacco, Firearms, and Explosives is seeking information that will lead to the arrest and conviction of those responsible for the fire at the 200 block of South 13th Street.

The fire was first reported to officials at around 4:30 a.m. at a building being developed for commercial use. While no one was injured in the blaze, the damages to the property and two adjacent buildings are estimated at $1 million.

“We encourage the public to provide any information that will aid investigators in quickly identifying and arresting the arsonist.” ATF Special Agent in Charge Sam Rabadi said in a press release. “Intentionally setting a fire causes significant property damage, disrupts people’s lives, and can cause serious injury or worse. ATF will target those who commit criminal acts of arson and remove them from our streets in handcuffs.”