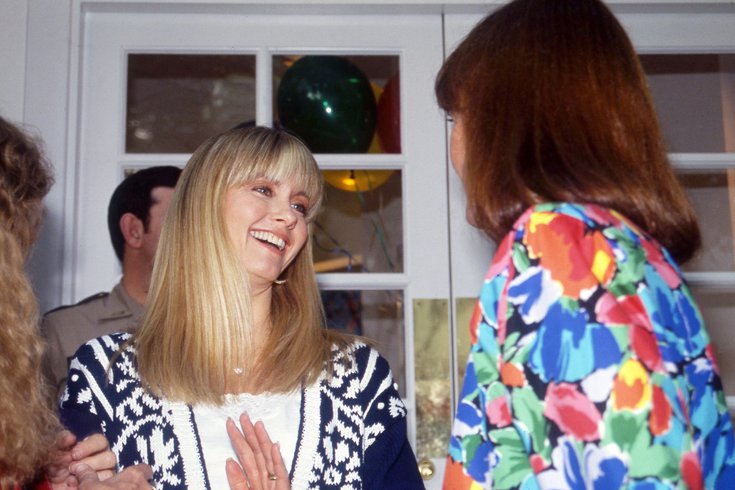 Olivia Newton-John, best known for her role in "Grease," died on Monday at the age of 73. The British-Australian actress and singer achieved multiple hit singles, four Grammy awards and an Emmy award.

British-Australian actress and singer Dame Olivia Newton-John died Monday at the age of 73 after a battle with cancer.

Newton-John was best known for her role in the 1978 movie "Grease," in which she starred as good-girl-gone-bad Sandy Olsson. The arc of her character mirrored her real-life career in some ways, as she traded the squeaky-clean country crooner image in for sexier tunes like "Physical" in the 1980s.

MORE: Kali Reis, star of 'True Detective' next season, opens up about trauma, boxing success and her new passion for acting

In a post on the actress' Facebook, her husband, John Easterling, wrote that the star passed away peacefully in her Southern California ranch, surrounded by friends and family.

"Olivia has been a symbol of triumphs and hope for over 30 years sharing her journey with breast cancer," Easterling wrote in the post.

Newton-John was born in 1948 in Cambridge, England. She later moved to Melbourne, Australia, with her family when she was 5. Her career began after she won a talent contest on a television show called "Sing, Sing, Sing," which launched her into the spotlight.

Newton-John and Easterling, who is the founder and owner of Amazon Herb company, were married in 2008. She had previously been married to actor and dancer Matt Lattanzi from 1984 to 1995, by which she had a daughter, Chloe Rose Lattanzi.

Chloe Lattanzi took to social media with a tribute to her mother, featuring photos of them throughout her life.

"Yours from the first moment I saw you and forever," Travolta wrote in the Instagram post, remarking on the positive impact Newton-John had.

When John Travolta said "Your Danny your John "that part got me like: #OliviaNewtonJohn #RIP pic.twitter.com/MiGhT1KEVH

"I love you so much. We will see you down the road and we will all be together again. Yours from the first moment I saw you and forever.
Your Danny, your John."

"Your Danny, Your John"

A host of other celebrities took to social media to share condolences and remark on Newton-John's talent and kindness.

I’m so sorry to hear the news about #OliviaNewtonJohn. She was such a nice person and a radiant bright light. She will be missed 🙏😔

Everything she did was infused with a joyousness that was absolutely contagious. We loved her & she loved us.
❤️🙏👍😍#RIP_OliviaNewtonJohn pic.twitter.com/gX5j1u7eYb


We have lost a great, iconic artist in Olivia Newton John, gone too soon from us at age 73. I trust she is now in the great Xanadu beyond. Know that we are forever hopelessly devoted to you, Olivia. Rest in song and mirth.

Very sad news. Great admiration for how she bravely faced breast cancer. Condolences to her loving family and friends. 🙏🏾💕 https://t.co/O5xuNjbAx4

Along with stars, everyday people who were fans of Newton-John and her work posted about what she had meant to them.

I never told anyone about this but last year for Olivia’s birthday, I put together a video for her with tons of her fans and Olivia saw it, loved it and sent me this 🤍.. Little did I know this would of been her last birthday 💔 #olivianewtonjohn #ripolivianewtonjohn pic.twitter.com/ujY4yyo92D

This one hurts. Rest In Peace Olivia Newton John 💔

The singer was first diagnosed with breast cancer in 1992, and after successful treatment, the disease returned in 2017. Her autobiography, "Don't Stop Believin'," was published in 2018.

Newton-John's family asks for donations in her memory to be made to the Olivia Newton-John Foundation Fund, which is dedicated to researching plant medicine and cancer.