There's more than one way to love 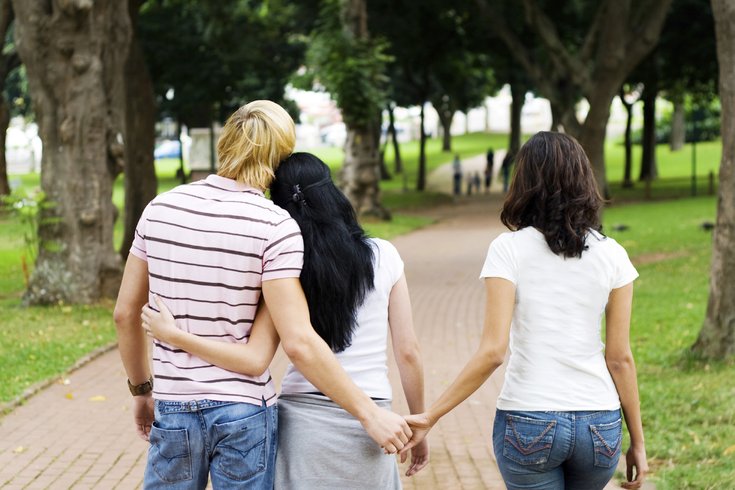 In polyamory, relationships can take as many forms as you find in organic chemistry.

When you hear the term “open relationship,” you might think, hey, there’s a glorified way to cheat. It sounds new-agey and cruel. But really, it’s in the nature of open relationships to prevent duplicitousness. The more you open up, the less you have to hide.

Open relationships break down into two main groups: Swinging (for sex) and polyamory (meaning “multiple love,” with an emphasis on emotional ties). You build as you go.

“If we’re going to talk about couples opening up their relationship, it would look like 'Choose Your Adventure,' like those books from when you were a kid,” Dr. Jennifer Pollitt, of Widener University, told PhillyVoice.com. Pollitt's studies focus on human sexuality education.

That’s right, relationships, just like handbags or ice cream sundaes, can be tailored just exactly to your desires. They’re called designer relationships. And there’s a reason why they’re en vogue: Today, we’re living longer than ever. Is it realistic to expect one person to satisfy all your earthly needs, body and soul? Instead, you can design the love pattern that works best for you.

“I don’t have any rules with any of my partners,” Dr. Annalisa Castaldo, a polyamorous professor of English at Widener, told PhillyVoice.com over email. “I would consider it rude, at the very least, to tell my partners who they can and can’t date, or that certain acts are allowed or not with other partners.”

Castaldo, who's married, is also in a relationship of six years with another man; he has a full-time live-in partner himself. Her husband, in turn, is seeing two other women, both of whom are in multiple relationships.

Relinquishing control is at the heart of the process of opening up. It’s a rational skill that allows relationships to continue separately and be accepted and understood by those on the outside.

As Pollitt says, there are two factors that may determine who’s going to take the leap into open love: Time and intellectual curiosity.

It’s not always an emotional tic that cultivates insecurities, but something as seemingly innocuous, yet deeply intimate, as one’s personal scent.

One of the most important rules relates to sexual health, especially critical to people so closely and intricately entwined. Some require showing test results, but testing positive for infection doesn't always mean no.

“[Having a sexually transmitted infection] is not necessarily a deal-breaker because there are so many folks that do have STIs, but it would have to be a much more lengthy discussion in terms of susceptibility and risk, not only to me but to anyone else that I would then partner with,” my anonymous source says.

It’s all well and good to talk about living on the fringe of society, but what draws people in? And what makes them stay?

For some, it’s the combination of real intimacy and mutual independence that can’t be found elsewhere.

“When you can look at your partner and there’s this total autonomy and at the same time deep love, that can be very powerful,” my anonymous source confides.

A strong core relationship (not everyone agrees, but generally, the leading two members of a relationship, the "First Couple," as it were, are referred to as “primary” partners, their other partners “secondary,” and so on) can, in fact, grow stronger, as the bonds of trust and honesty about a person’s unfulfilled needs necessarily take deeper root.

It takes a leap of faith to come out as a polyamorous person, Castaldo said. Coming out to your partner can set into motion a world of change, as new identities come to light.

“[My husband] Alex ... is oriented to poly the way other people are oriented to hetero or homosexuality. It took him a long time to admit that to himself, which is why we were together over a decade before he felt he could bring it up. When he did, I was surprisingly not upset. Instead, I saw his telling me how he felt as a demonstration of just how much he trusted and loved me, to be able to share that."

Reports are inconclusive as to whether the tendency toward polyamory is innate. But as new-fangled as this lifestyle may seem, some conventional wisdom holds. When you’re in a relationship already on shaky grounds, it doesn’t help to open up that relationship.

That’s not to say that a designer relationship has to begin with two people already in a monogamous bond. But when it does (and it often does, since the love chemicals that attract us to one another initially bond us in a monogamous holding pattern), that initial union must be strong, or else risking vulnerability can go awry.

You can't prevent the pain of adjustment as your loved one falls in love with someone else and doesn’t pay as much attention to you as they would have before.

“There’s this thing when you’re poly called new relationship energy, or NRE, and that’s when you first meet someone … and you’re just completely drawn and magnetized to this new person in your world. And that can be really difficult,” Pollitt says.

Butterflies in your stomach? As it turns out, the day-to-day of open relationships is not so different. Love is discrete, but it can multiply. Love knows no bounds. For love is love by any other name.