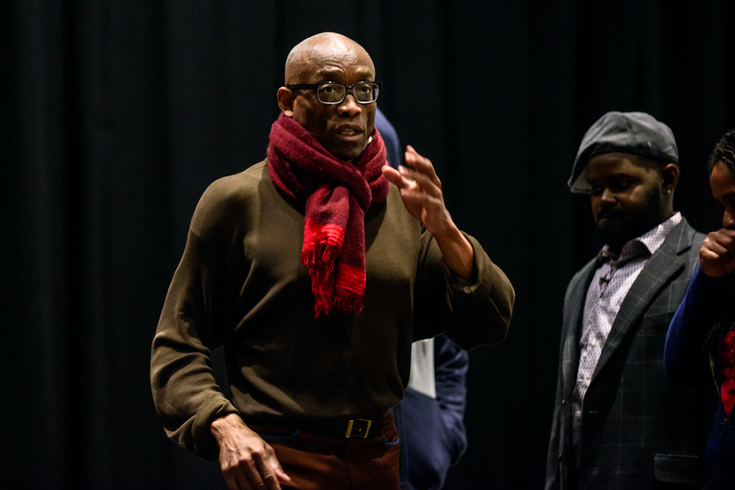 Opera Philadelphia and The Fringe Festival’s "We Shall Not Be Moved," directed by Bill T. Jones, (pictured) takes place Saturday, Sept 16 through Sunday, Sept 24 at the Wilma Theatre.

By now, locals know that Opera Philadelphia’s debut O17 binge-fest and the 21st annual Fringe Festival are up-and-running – separately – with epic works throughout September. Yet, no one would argue that the fall art season’s most towering, yet tender, theater piece is the collaboration between Opera Philadelphia and the Fringe: “We Shall Not Be Moved.” A new work with music by Daniel Bernard Roumain, a libretto by Marc Bamuthi Joseph, and modern opera’s most provocative vocalists, the true stars of “Moved” is its subject matter (Philly’s MOVE tragedy of 1985 is a ghostly key to the opera) and its director, Bill T. Jones.

The celebrated choreographer, dramaturge, and dancer crafted “Moved” as a wild blend of contemporary spoken word, movement, video projection, classical, R&B, opera and jazz. Those familiar with the MacArthur “Genius” Awardee, Tony Awardee, Kennedy Center Honoree and National Medal of Arts’ recipient know that multi-media work is how he rolls. Before the Sept 17 to 24 run of “Moved” at the Wilma Theater, Jones spoke in a rare interview during a break in rehearsals.

Q: Moreso than any choreographer, you have implicated yourself in every work in every movement you’ve committed to the stage. How so is that true within “We Shall Not Be Moved?”

A: My philosophy of creation is that every work I make is led by a set of questions. I want to make something free of formula or cliché, to be as specific as possible so to show people with different points of view and social position and how they can come into the work…What is interesting about this “Moved” assignment is that I was asked to come in as a director, but I inherited the dramaturgical title. They wrote something that I called a ‘choreo-poem.’ To that, I needed to know what made this theater, a story, rather than looking at a still life.

Q: What were your next steps?

A: I began looking at the psychology of the characters, the particulars of Philadelphia and this fictitious family led by a 15-year-old, self-described Harriet Tubman...This is all connected to the discourse of the moment: the Trump administration, the scars left behind by Ferguson and Charlottesville.

Q: Were you looking to connect to a work in which to comment on all things Ferguson, Black Lives Matter and such at this point of your artistic life?

A: I don’t know that I was looking, but, like everybody else, I have been punched in the face by it all. This found me.

Q: You’ve tackled all genres and mash-ups. What challenge does opera present?

A: I like to think about form. Form and thinking are inseparable for me. From there, I go to how and what is thinking’s relationship to feeling. That’s important to me – in everything that I do that is creative. This opera is something my collaborators were wrestling with for two years. They didn’t love the idea of calling it a ‘hip hopera,’ so I came up a hybrid opera. My whole life has been a hybrid, mixing this and that. That’s why I continue to call myself a post-modern artist: it’s all about combing new forms to move forward.

Q: What had you known about Philly – socially, politically, racially – before coming into this project?

A: I know what I know about Philly first from the civics classes of our youth – the Quakers, Benjamin Franklin and the Liberty Bell. Last week, during a day off, I ran to the Pennsylvania Academy of the Fine Arts. Now, if I wanted to show someone outside of our culture what America was about, I would bring them to Philly and that museum. The foundation is there.

Q: How do you bring movement to what seems to be an opera about identity politics?

A: There’s a white tenor playing a firebrand black-identifying young radical. There is a black countertenor playing a f2m trans character. There is a baritone playing a religious, young, black man and another bass baritone playing ‘John Henry,’ upon who the story turns as he is the young, black, male statistic on the news. I had a conversation with John Holiday, who is playing our black trans character, and he asked, ‘What do I do when I am not singing? How does my character live in his body?”’ Well, that’s a human thing. We don’t want to portray the clichés. We want to show the characters from the inside. The vocabulary should be open, toward a lyrical abstract style.

Q: Not that it has to, but how does “We Shall Not Be Moved” fit into your body of work?

A: My process is like my face. I can change my hair, put make-up on, but the structure of my face is the structure of my face. There’s certain things that I have a predilection for, one of which is...movement in all forms, the architecture of time and space as I have studied it in the world of dance. So, I care, ultimately, but in the moment, I care more about what the thing in front of me needs in order to be realized. There are things that connect it to other work of mine, but, the form of opera is a very exacting and demanding one – maybe moreso than dance. Dance is malleable. Dance doesn’t need context. This opera is a whole other process: a collaboration with Philadelphia and the moment we are in at present.

Opera Philadelphia and The Fringe Festival’s "We Shall Not Be Moved" takes place Saturday, Sept 16 through Sunday, Sept 24 at the Wilma Theatre, 265 S. Broad St. Tickets are stand by, day of show. Show time is 8 p.m. Call 215-893-9456 for more information or click here.