'The Wake World' brings a phantasmagorical new opera to Philly 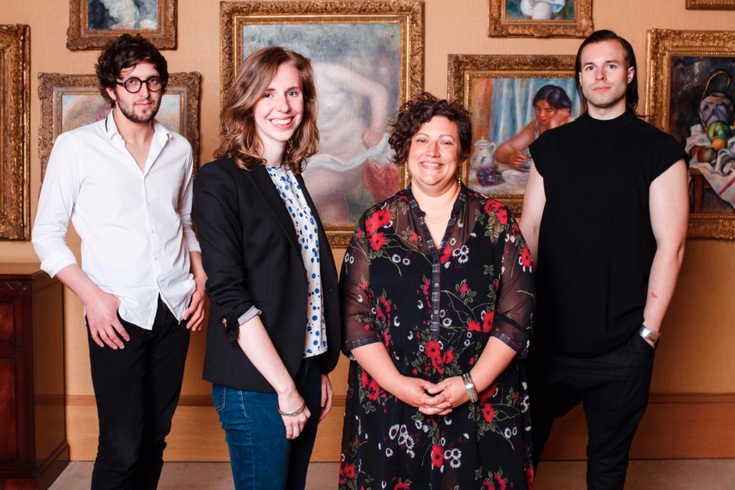 Composer David Hertzberg was a Curtis Institute student with a museum pass when he initially discovered the Barnes Foundation, and was immediately enchanted by Dr. Albert Barnes’ eclectic art menagerie.

“It didn’t feel to me like a museum in the conventional sense,” Hertzberg recalled from a taxi stuck in Manhattan traffic.

“It felt like a crazy temple or shrine, a totally magical place because of Dr. Albert’s vision.”

So when Opera Philadelphia called last year to ask Hertzberg to compose a new opera inspired by and performed at the Barnes, he pounced on the opportunity. Of course, Barnes’ unpredictable “ensembles” – which place Impressionist master works next to early American furniture next to Egyptian artifacts, to discover unexpected echoes across different media and eras – can be an overwhelming subject.

“It’s dizzying how much stuff there is in the collection,” Hertzberg says.

“I was certainly stoked about the idea of responding to the collection because there’s no dearth of inspiration there, but it’s also kind of daunting. By experiencing art in this way, which feels very ritualistic to me, it’s like you learn about the hand behind the curtain that moves it all, or about human perception. So I started to think: ‘How can I create a work that will respond to this space, exist in the space, and amplify these qualities?’”

Thinking back on the collection, he made an unexpected connection of his own to a story he’d read not long before by the infamous 19th-century occultist Aleister Crowley.

“I thought the story was so compelling and beautiful and weird,” Hertzberg says.

“Crowley was all about absorbing all of these different mystical, religious, symbolic, astrologic, elemental systems and ideas, and consolidating them into this swirling vortex of associations that he let loose into this wild, beautiful chaos. That seemed to me such a poignant literary parallel to what Barnes was doing with his ensembles.”

The resulting opera, “The Wake World,” is one of three world premiere pieces that will form part of Opera Philadelphia’s inaugural O17 Festival, which kicks off on Thursday and will present seven “operatic happenings” over the ensuing 12 days. There are also new operas about the MOVE bombing and a Victorian-era murder trial, in addition to the Philly premiere of “War Stories,” a site-specific double feature performed in the Philadelphia Museum of Art; and a dazzling new version of Mozart’s “The Magic Flute” that reimagines the 18th-century opera in the style of a 1920s silent film using very 21st-century technology. It creates the look of a surreal cartoon come to life.

We wanted to Netflix the opera experience."

Opera Philadelphia is counting on bringing in new audiences whose idea of a thrilling evening is more “Game of Thrones” or “House of Cards” than Beethoven or Wagner. If you’re willing to stay planted on your couch for an entire weekend binging your latest TV obsession, the thinking goes, surely you’d also enjoy heading out to an opera that packs a season’s worth of drama into a few hours – and adds incredible singing to boot.

While the company has increasingly turned its focus toward new works in recent years – the jazz-oriented “Charlie Parker’s YARDBIRD” and classical-world pop star Nico Muhly’s Sister Wives chamber piece “Dark Sisters,” to name a couple – O17 is its most ambitious offering by far.

“People are thirsting for extraordinary stories, for things that exceed expectation, that surprise and delight and sometimes shock, and opera has all the tools for that.”