The Golden Nugget Atlantic City says a family of ospreys have a nest on the structure, and to leave the birds undisturbed, its old advertisement will stay up until nesting season ends 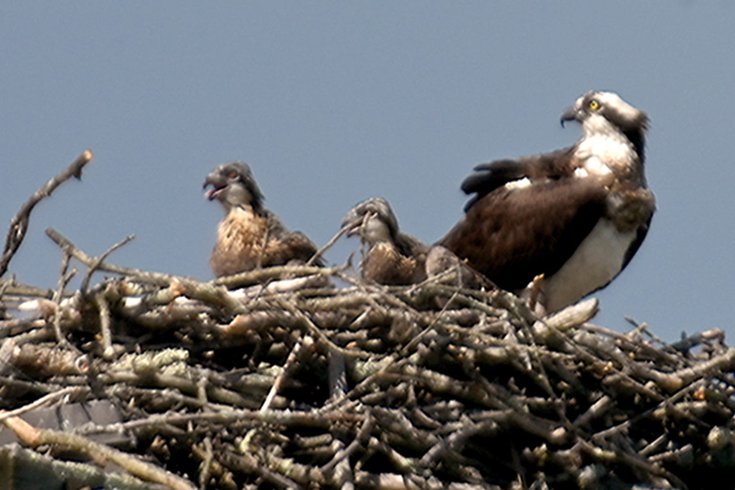 Ospreys have build a nest on a billboard along the Atlantic City Expressway. The Golden Nugget Casino, which has signs promoting concerts that took place months ago, explained on Facebook that it's leaving the old signage in order to not disturb the nest. The file photo above shows ospreys in Massachusetts.

Golden Nugget Atlantic City took to social media recently to explain why a billboard with outdated signage from the spring remains on the Atlantic City Expressway, and the reason has the internet applauding.

Ospreys have nested in a billboard, which advertises shows starring Frankie Avalon on April 30 and Dionne Warwick on May 14, according to the casino's Facebook post. The billboard can be seen by travelers heading eastbound on the expressway.

"For those who have been wondering, we are aware of our outdated entertainment billboard on the AC expressway," a Golden Nugget Atlantic City post from Tuesday explains. "Golden Nugget is doing our part in helping to conserve our local wildlife, the Ospreys. The endangered bird is currently nesting on top of our billboard."

Positive reactions have flooded the post since, with users thanking the casino for their conservation efforts, for their communication on the subject and even promising to visit the casino in the wake of this positive news.

Ospreys are carnivorous birds, with wing spans up to 6 feet, that can live as long as 30 years in the wild. The species is one of the most widely distributed birds in the world, but they are mostly found in coastal areas due to fish making up around 99% of their diets.

In New Jersey, ospreys make their nests along the Atlantic coast from Sandy Hook to Cape May, and along the Delaware Bay and River in Cumberland, Salem and Gloucester counties. As of a 2020 report by the New Jersey Department of Environmental Protection, the osprey population is thriving in the state – with 647 occupied nests, producing a total of 812 young. The next New Jersey osprey population count takes place this year.

This was not always the case, though; as the species' coastal population in New Jersey plummeted in the 1970s due to the use of DDT pesticide. By 1974, there were fewer than 50 osprey nests in the entire state, which landed the birds on New Jersey's endangered species list.

Given how beloved ospreys were at the Jersey Shore – the bird has been the mascot for Stockton University since the 1970s – conservation groups rallied to help it survive.

Osprey populations bounced back after the use of DDT pesticide was banned, and they were aided by the construction nesting platforms. By the mid-80s, there were more than 200 healthy nesting pairs in New Jersey, moving the osprey's statewide population from endangered to threatened in 1985. The osprey population has continued to thrive since, thanks to conservation efforts, such as the New Jersey Osprey Project.

There are now more than 800 nesting platforms in the state, and it is estimated that 75% of nesting osprey use man-made nest structures – which apparently include casino billboards on the AC Expressway.

At various times, there have been a number of live "osprey cams" streaming video from these nesting platforms, like this one in South Cape May, set up by The Nature Conservancy in New Jersey.

Atlantic City structures are no stranger to wildlife conservation – in 2021, a nestbox for peregrine falcons was installed atop the Sheraton Atlantic City Convention Center Hotel.

Although the Sheraton nestbox was planned and the Golden Nugget billboard nest was not, we can't help but join the ranks of Facebook users sprinkling praise. We only hope the casino will share photos of baby ospreys emerging above the smiling faces of Frankie Avalon and Dionne Warwick.

As for prospective Golden Nugget guests who solely get their news from billboards, though, it might be a bit of a wait to find out what live entertainment is coming to the casino next.

"(W)e will have to wait until nesting season is over, after September 1, to change the message on this board," the casino wrote on Facebook. "Thank you for your understanding!"