Habitat destruction and climate change noted as two factors threatening monarchs, which live in New Jersey and Pennsylvania for much of the year 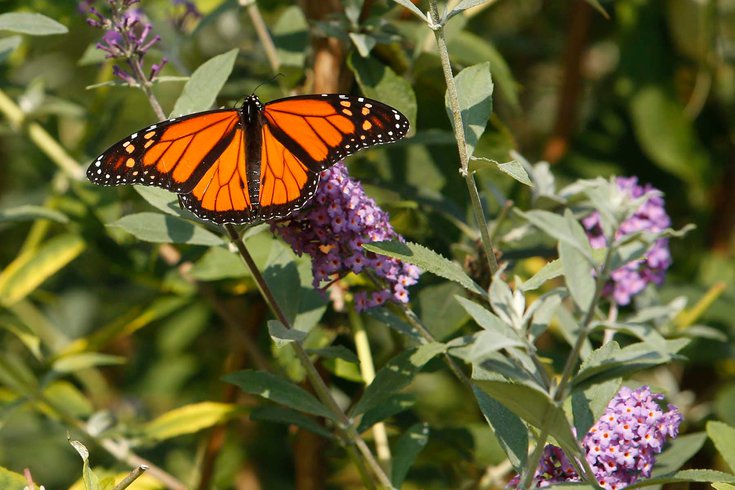 Migratory monarch butterflies have been labeled as 'endangered' by the International Union for the Conservation of Nature. The species, which travels through New Jersey and Pennsylvania, is threatened by habitat destruction and climate change.

The migratory monarch butterfly, known for its orange-and-black coloring and summertime stay in the Northeast, is now considered an endangered species.

The International Union for the Conservation of Nature, the global leading authority on the status of biological diversity, added the beloved insect to its "Red List of Threatened Species" on Thursday. The monarch is labeled as "endangered."

The Red List update "highlights the fragility of nature's wonders, such as the unique spectacle of monarch butterflies migrating across thousands of kilometers," IUCN Director General Bruno Oberle said. "To preserve the rich diversity of nature we need effective, fairly governed protected and conserved areas, alongside decisive action to tackle climate change and restore ecosystems."

The IUCN Red List includes 147,517 species, and 41,459 of those species are threatened with extinction.

Only 1% of insect species have been assessed by the IUCN, making the monarch's endangered listing significant, according to National Geographic.

The population, which makes its miraculous migration from Mexico and California in the winter to summer breeding grounds throughout the U.S. and Canada, has shrunk between 22% and 72% over the past decade, the IUCN reports. The western population has the greatest risk of extinction, dwindling from as many as 10 million to only 1,914 butterflies between the 1980s and 2021. The eastern population, the larger of the two, shrunk by 84% from 1996 to 2014.

Habitat destruction and climate change are the biggest threats to the species. Specifically, logging and deforestation in Mexico and California have destroyed substantial areas of the butterflies' winter shelter, while pesticides and herbicides used in agriculture throughout the Americas kill not only the butterflies but precious milkweed, which plays host to butterfly larvae.

In the Philadelphia region, monarchs are beautiful visitors during the spring, summer and fall. They arrive in New Jersey and Pennsylvania around May, and during the summer they produce offspring. The butterflies that arrive in the area to reproduce do not live to make the fall migration, but the hope is that their offspring survive to migrate to Mexico.

During the fall migration, monarchs need to rest and refuel at "stopover sites." One such site is in Cape May, New Jersey, where thousands of butterflies can be seen congregating each year around October. Cape May even has a Monarch Monitoring Project to keep track of the tiny travelers that pass through.

In order to prevent extinction, enough butterflies need to survive to maintain the populations. Despite the alarming new categorization of the species, there is some hope for the future of migratory monarchs. A controversial study using citizen science data found that the monarch population may actually be increasing in some areas.

Since monarchs are backyard insects, everyone can help assure their survival. For instance, planting native milkweed is one simple way that anyone can pitch in. There are also conservation groups, such as Monarch Joint Venture, taking action to save our fluttering friends.

"It is difficult to watch monarch butterflies and their extraordinary migration teeter on the edge of collapse, but there are signs of hope," said Anna Walker, member of the IUCN SSC Butterfly and Moth Specialist Group. "So many people and organizations have come together to try and protect this butterfly and its habitats. From planting native milkweed and reducing pesticide use to supporting the protection of overwintering sites and contributing to community science, we all have a role to play in making sure this iconic insect makes a full recovery."