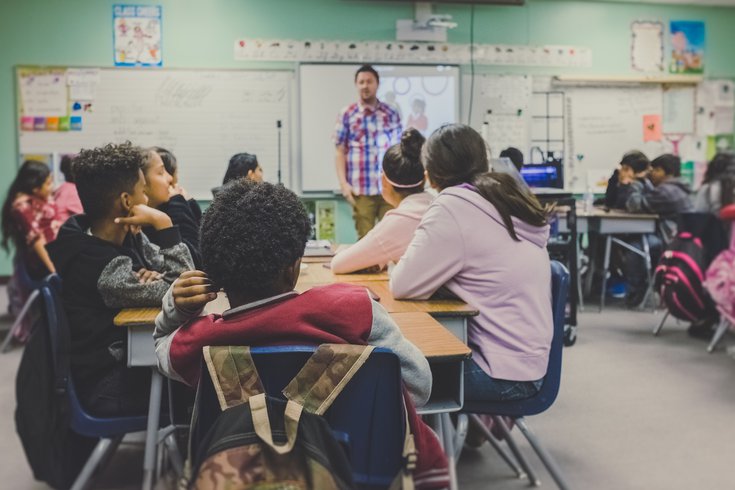 In an effort to 'reverse course' on the national and statewide teacher shortage, Pennsylvania's Department of Education unveiled a three-year strategic plan to increase the educator workforce and diversify teaching staff in K-12 schools by 2025.

In an effort to boost the number of teachers in Pennsylvania schools amid a national educator shortage, the state's Department of Education unveiled a three-year strategic plan aiming to remove barriers to accessing certification needed to join the workforce.

Pennsylvania will need thousands of teachers by 2025, according to "The Foundation of Our Economy," which was released on Monday. As the country continues to see a decline in teaching staff, Pennsylvania is pushing to address school needs in order to diversify its workforce to better reflect the growing demographic changes in the state.

A decade ago, about 20,000 teachers entered the workforce each year. Last year, the number was just about 6,000. Though the last several years have been especially challenging for educators and school administrators, the continued increase of teachers leaving the profession has sparked concern among state leaders.

"Educators are the cornerstone of our communities and serve as the gateway to our collective future; without them, our workforce and economy cannot survive," said Secretary of Education Eric Hagarty. "Like other states across the nation, we have been grappling with an education workforce shortage that would have severe and long-lasting implications for generations to come."

The agency identified five core areas of focus to reach in order to improve the workforce and retain teachers.

These include meeting staffing needs of schools in every community; diversifying the workforce to represent the students enrolled; streamline the certification process; ensuring high-quality preparation opportunities for aspiring teachers; and ensuring quality professional growth and development opportunities.

By August 2025, the state anticipates increasing the number of pre-K-12 candidates in preparation programs from 18,000 to 21,600. One major way to do that, according to extensive feedback sessions with educators and other state leaders, is to amend the Public School Code and eliminate the basic skills assessment required for entry into an educator preparation program.

This amendment was approved earlier this month, waiving the requirement for the next three years. Other approved amendments include improved pathways to certification for teachers coming into Pennsylvania from other states.

It also establishes a Committee on Education Talent Recruitment, which develops programs for high school students interested in pursuing a career in education. Lawmakers also approved a grant program for college students in order to increase participation in the education workforce.

Students of color represent 37% of the public school population in Pennsylvania, while teachers of color only account for 7% of teachers in the state, according to the Department of Education. A recent study from Research for Action found that 39% of Pennsylvania school districts employed only white educators.

Though Philadelphia's percentage of Black teachers continues to decline, the largest school district in the state still employs more than half of the state's teachers of color.

One of the state's chief goals in improving the workforce is diversifying teaching staff in order to reflect the student body. For this reason, the plan notes that the state intends on increasing the percentage of educators of color from 13% to 25% by August 2025.

The primary way schools and districts will work to achieve this is by partnering with nonprofits and support incentives to increase participation in the educational field among students of color in high school and college programs.

The state hopes to improve its certification system by making the process quicker and easier for applicants, streamlining it so prospective teachers are able to make employment and career decisions quickly.

Other strategies include expanding the number of educational preparation programs and working with state leaders and educational stakeholders to identify areas of potential improvement for existing programs.

"Pennsylvania's educator shortage is the biggest threat facing not only our educational system but our future prosperity as a commonwealth," said Laura Boyce, executive director of advocacy group Teach Plus. "If schools are engines of educational and economic opportunity, then educators are the conductors who keep the train moving forward."

Philadelphia has continued to struggle with workforce shortages, among both bus drivers and teachers.

As a result, the district implemented several temporary solutions to get to the end of the most recent academic year. Among them were daily bonuses for substitute teachers and nurses, which were meant to entice experienced educators and workers to come back to work.

Still, the city saw a surge in mid-year teacher resignations, Chalkbeat Philadelphia reported. Between Dec. 1, 2021 and Feb. 15 of this year, 169 teachers resigned from their positions. That is more than double the amount of teachers who resigned mid-year during the 2020-2021 school year, and does include teachers on sabbatical or extended leave.

Teacher attendance was also on the decline, with a 20% increase in daily absences among educators. The beginning of the school year was also tough, with a lack of bus drivers and other school personnel causing havoc for the district during the early weeks of William Hite's last year as Superintendent.