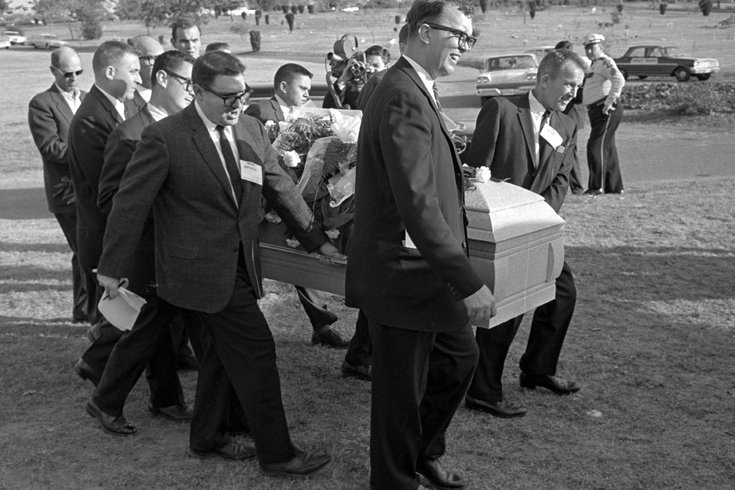 The original casket containing the body of Lee Harvey Oswald is carried by reporters who were enlisted to act as pall bearers at the interment at the Shannon Rose Hill Cemetery in Fort Worth, Texas.

DALLAS - The decaying pine coffin in which Lee Harvey Oswald was buried 51 years ago rightfully belongs to the brother of President John F. Kennedy's presumed assassin, a Texas judge ruled on Friday.

Oswald's body was exhumed in 1981 and his original casket was discarded when he was reburied. Robert Oswald filed a lawsuit to gain ownership of the casket from a funeral home that tried to auction it off.

"Digging someone up and selling a used coffin is weird at best and disgusting at worst," said Robert Oswald's attorney, Gant Grimes.

State District Judge Don Cosby, who heard two days of testimony during a trial in December in Fort Worth, ruled Robert Oswald, 80, has owned the coffin since purchasing it for $300 for his brother's burial in 1963.

Funeral home owner Allen Baumgardner Sr. claimed that Robert Oswald made a gift of the coffin to the estate of Lee Harvey Oswald and had no legal claim to it.

But the judge ruled that Robert Oswald retains ownership of the casket.

Grimes said his client wants to destroy the coffin and end this chapter of history.

"Robert Oswald bought this coffin with the intention of never seeing it again," Grimes said.

The judge ordered Baumgardner to pay Oswald damages of $87,468, the amount a buyer had agreed to pay for the decaying coffin at auction in 2010.

Lee Harvey Oswald’s funeral and burial were managed by the Miller Funeral Home, where Baumgardner was employed. Baumgardner later purchased the business and changed the name.

Lee Harvey Oswald's body was exhumed more than 30 years ago to determine whether the body in the coffin was Oswald or a Russian impostor. Oswald was reburied in a different coffin because the original coffin was allegedly damaged in the exhumation.

Baumgardner took the coffin and stored it at his funeral home.

"Nobody claimed it, it was abandoned property," said Baumgardner's attorney, Brett Myers.

In his ruling, Judge Cosby said that the actions of Baumgardner and Baumgardner Funeral were wrong and of a wanton and malicious nature that entitled Robert Oswald to damages.

Oswald was shot dead by Dallas nightclub owner Jack Ruby on Nov. 24, 1963, in what was the first murder shown live on a national U.S. television broadcast. The killing took place two days after Kennedy was fatally shot in Dallas.