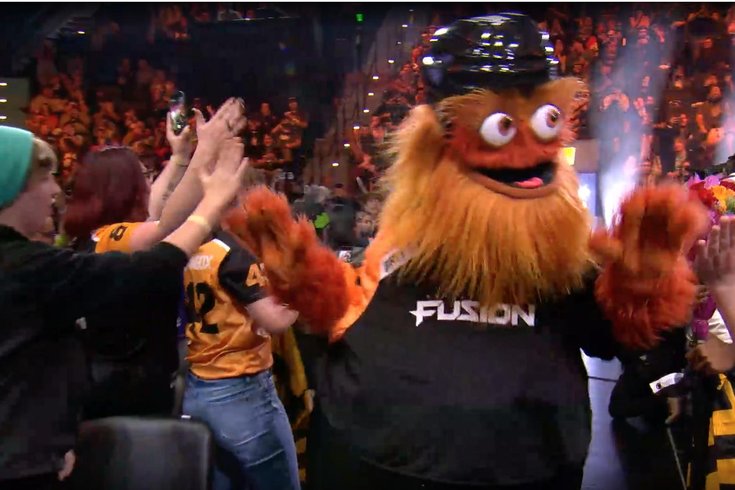 Gritty is glad the Overwatch League grand finals are coming to Philadelphia. He likes the Fusion.

Philadelphia's eighth, and newest, professional sports team will play in the City of Brotherly Love for (likely) the first time next February, when the Overwatch League spends two home stands at The Met Philadelphia.

The esports league which plays the popular video game Overwatch, announced its 2020 schedule Tuesday, including a pair of visits to Philadelphia, and one more in Atlantic City. It's a big step for the league, which spent its first official season playing all matches in Los Angeles, and has only recently started branching out to its geographic locations across the country.

The Philadelphia Fusion, who finished second in 2018 and are headed back to the postseason in 2019, will play a pair of home stand matches at The Met, facing the Washington Justice on Feb. 15 and the Florida Mayhem on Feb. 16.

The team will return to The Met in late May when they face the Chengdou Hunters and Seoul Dynasty as part of a seven-team home stand the weekend of May 23 and May 24.

"We are thrilled to bring the Philadelphia Fusion home for the 2020 season," Joe Marsh, Chief Business Office for the Fusion, said in a release Tuesday. “The Met and Boardwalk Hall both have a rich history of hosting world-class events. We can’t wait to bring professional Overwatch to these venues and create unforgettable experiences for our fans.”

If you've made it this far and don't know what this is all about, here are some highlights from last year's championship event (which will likely confuse you even more):

The league is planning on moving its teams to their home markets next season, in what will be a pivotal year for the league. The Fusion will officially move to Fusion Arena in 2021, a $50 million, 3,500-seat esports arena to be built near the South Philly sports complex. The arena will take up 60,000 square feet and house a training facility, bar areas, a broadcast studio, and premium seating.

FYI, Gritty has already given the Fusion his stamp of approval, so you should get on board before you're considered a bandwagon fan.