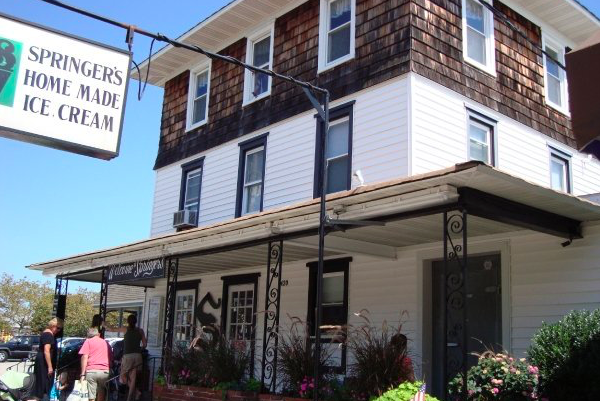 Read More
It's a rite of passage for any frequenter or visitor of Stone Harbor: waiting in long lines to get a cone or a cup from Springer's Homemade Ice Cream. Few tests of patience in life are such mortal locks to be worth it.

Tragically, Barbara Humphreys, the owner and matriarch of Springer's, died this week after suffering injuries in a car crash last Thursday at her daughter's home in Wayne, Delaware County. She was 82 years old. Her husband, Neil Humphreys, also was in the vehicle at the time.

The shop posted a Facebook message about Humphreys – known at the shore as Mrs. H. – passing earlier in the week.

Details of the accident remain unclear. Neil Humphreys,  co-owner of Springer's, remains hospitalized with serious injuries, according to NJ.com.

Mary Humphreys Goldenthal, the couple's daughter and current manager of the shop, said her parents thought they were parked in her driveway, but the car was in reverse. At some point, Barbara was reportedly thrown from the vehicle and Neil become trapped underneath it. They were both rushed to the same hospital.

Springer's has been named among the best ice cream shops in the United States and has become a pillar of Stone Harbor's community since opening in 1975.

"The Springer's meant so much to many people in Avalon and Stone Harbor," said Facebook commenter Joseph Santero, who joined a chorus of locals and former employees expressing condolences. "My wife and all her sisters and brothers worked at Springers. When we got married 3 years ago, we had to make sure Springers was apart of our wedding at the beach. And one of the best parts of the wedding was my wife Lisa Sweterlitsch scooping ice cream in her wedding gown. Our prayers are with the family."

Funeral arrangements for Humphreys were not immediately available.