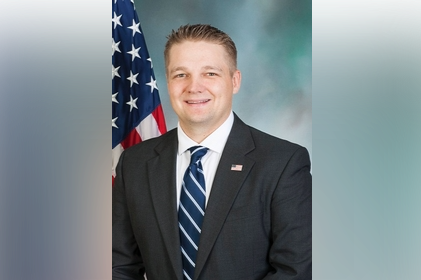 With a gun, a target and social media, Pennsylvania State Rep. Aaron Bernstine sent a clear warning this week to vandals who left garbage and feces strewn about his driveway.

Bernstine, a Republican who represents parts of three counties in western Pennsylvania, posted about the vandals Tuesday on his campaign's Facebook page. Along with a three-paragraph message warning would-be vandals against stepping foot on his property again, he included a video that shows him taking part in tactical firearms training.

"Luckily for the folks who thought it was a good idea to vandalize my home, you were just out of reach of the security cameras on our property," Bernstine wrote. "Throwing trash and human feces on my driveway makes you a pretty disgusting human being. ... As you can see, we are willing and able to protect ourselves. My family and I will not be intimidated and I will never stop standing up for the things I believe in."

The video shows Bernstein moving in a defensive position around the target and firing numerous shots from different angles.

“I will never hesitate to defend my family should someone have tried to take that a step further,” Bernstine told TribLive.com on Friday.

Sam Piccinini, a retired police officer and former candidate for Beaver County sheriff, is heard giving instructions to Bernstine in the video, according to BeaverCountian.com.

Piccinini echoed Bernstine's statements in a comment on the video.

"I take great pleasure and pride in issuing you this WARNING!!!!!!," he wrote. "I trained this man and his wife to protect themselves and their entire family, if you dare to take him to task and or test his limitations, I can Guarantee you that you will be opening pandora's Box to the level of your worst imaginable nightmare."

Bernstine said trash, boxes, towels and human feces were thrown about the driveway on his 107-acre beef cattle farm in New Beaver.

Bernstein indicated to the Tribune-Review that he thinks the vandals tried to intimidate him because of his political affiliations.

"This is an example of the consequences of the hyperpartisan rhetoric that exists in our political sphere today,” he said.