Demolition to the former headquarters of Bethlehem Steel Corp. will make way for new development 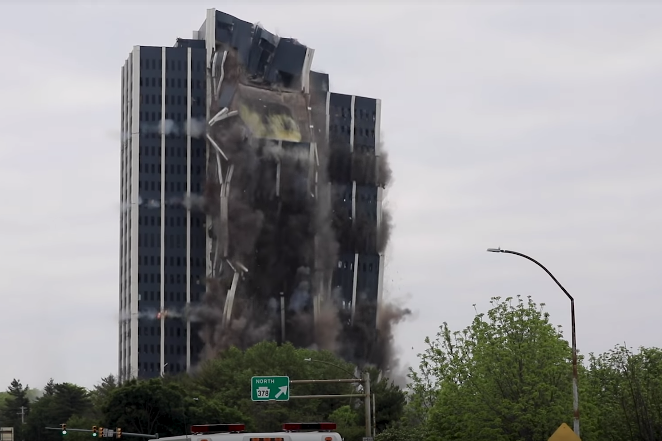 The demolition of the 21-story former headquarters of what was once the second largest steel company in the world took place at 7:04 a.m. The building had been unoccupied since 2007.

The building opened in 1972 and was named after Bethlehem Steel chairman, Edmund F. Martin. The current owners originally wanted to redevelop the 47-year-old structure, even successfully landing the building a spot on the National Register for Historic Places. However, the owners realized in time it was easier to knock down the 332-foot building and start anew.

It will take up to a year to clean up the demolition site. Once the debris is collected the new owners will start a $200 million development project that will include a restaurant space, a convenience store, a 132-room hotel, retail stores, and even 528 apartments.

The Bethlehem Steel mill, which was less than two miles from Martin Tower, was later redeveloped into Sands Casino in 2009.

Bethlehem Steel was a giant in the world of steel, supplying ships and arms during World War II. The company's steel was used in several U.S. landmarks, such as the Empire State Building and Golden Gate Bridge.

Not long after the company moved into Martin Tower the steel industry suffered a recession. By 2001 the company declared bankruptcy and in 2003 the company sold all of its assets.