The women of 'The View' are very into Joe Biden 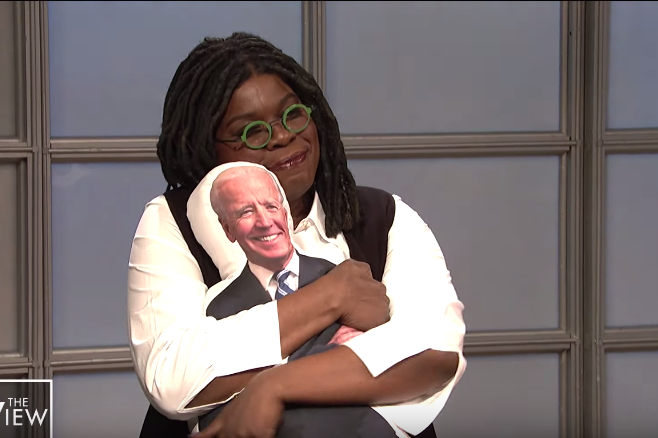 On the season 44 finale of "Saturday Night Live" the ladies of "The View" talk about their undying love for former Vice President Joe Biden.

The finale had a number of highlight moments, including Pete Davidson's rap love letter to the Netflix show "Grace and Frankie" and Leslie and Kyle's adorably weird romantic sketch about falling in love with each other. But the theme this episode was something a bit more topical as the finale explored abortion.

The cold open was set in the Oval office with Alec Baldwin back as Donald Trump. With the help of a few of this 'trusted sidekicks', Melania (Cecily Strong), Mike Pence (Beck Bennett),  Sarah Sanders (Aidy Bryant) and a few others, he broke out into song to the tune of "Don't Stop Me" by Queen. Justice Clarence Thomas (Kenan Thompson) made an appearance to sing, "And the Supreme Court's ready for a fight on abortion. We got the votes now. Women are screwed."

Weekend Update opened on the abortion topic with Colin Jost commenting, "Well, this season of 'SNL' started in 2018, but it looks like it's going to end somewhere back in the 1970s." Jost's commentary ended there to make way for a final note form Leslie Jones, or as she refers to herself, Leslie Jones Dracarys 'That B**ch' Jones.

She roasted the 25 senators who voted for the abortion ban in Alabama, noting of the fact they were all men: "This looks like the mugshots of everyone arrested at a massage parlor. And if any one of them had lips I would tell them to kiss my entire a**." Before adding, "You can't control women."

The show's "The View" skit even touched on abortion as its 'hot topic' before bringing out Pete Buttigieg (Paul Rudd). Though the ladies don't give him much of a chance, as Joy (Kate McKinnon) notes, "We love you, but we can never forget about Joe Biden." Not being able to let go of their undying passion for Biden, the ladies enter into a montage of adoration for the former Vice President.

Meek Mill also joined the stage with musical guest DJ Khaled and performed on "Jealousy/You Stay Medley" and "Just Us/Weather the Storm/Higher." Check out the performances below.