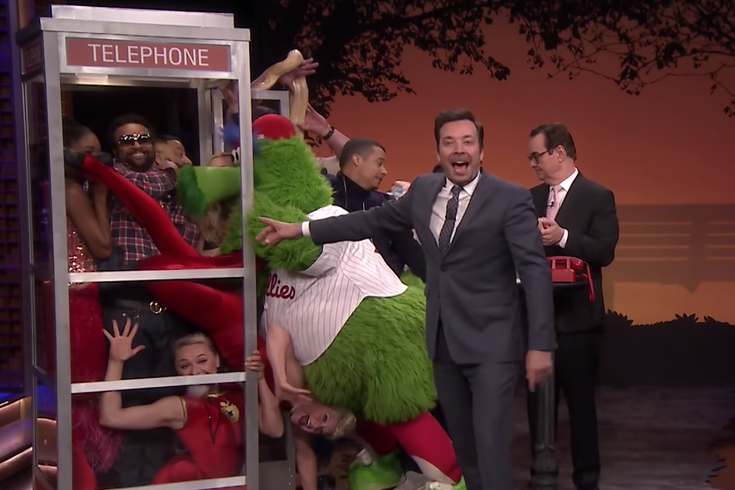 The Phillie Phanatic joins the chaos on Friday night's The Tonight Show with Jimmy Fallon.

Jimmy Fallon’s “The Tonight Show” is often an exercise in intentional randomness. This was especially true during a segment called “Phone Booth” on Friday night’s show, when the host brought out a litany of celebrities and tried to shove them all into a pair of phone booths.

As you might imagine, calamity ensued, including the Philadelphia Phillies’ mascot, the Phillie Phanatic, making a super random cameo:

The Phanatic, as you can see in the clip above, was part of the final super round. The question, for five whole people being pushed into an already-cramped phone booth? Fallon had to rhyme three words with “pickle” in 15 seconds.

But he did it, so the Phanatic put his face (and his weird tongue) into the phone booth with Union, producer DJ Khaled, recording artist shaggy, two contortionists, and figure skaters Johnny Weir and Tara Lipinski. It was quite a scene.

The Phanatic leads an extraordinary life.