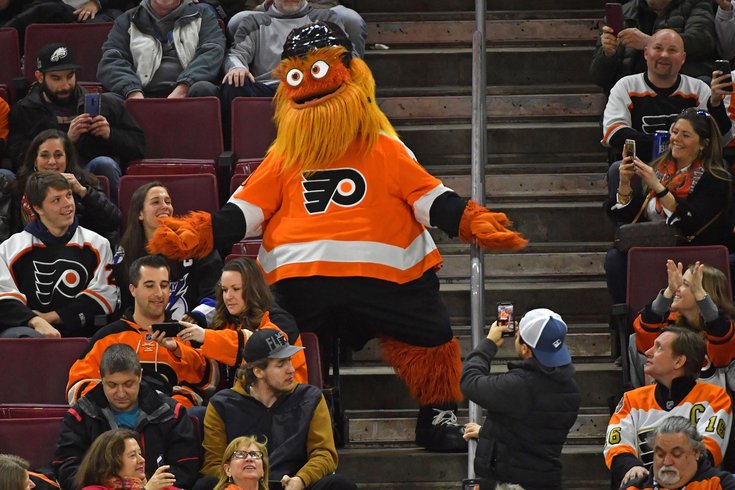 The Flyers didn’t reach the NHL’s postseason this year, but Gritty doesn’t take any days off. On Monday, for instance, he (rightfully) won a Webby Award for the best sports-related social media account on the internet.

The furry orange fella came up during an interview between Thompson and Philly native Arthur Kade:

Specifically, the Gritty talk comes in the final section of the interview:

"KADE: I want to ask you about Gritty. Gritty has become national news over the last year. What do you think about the orange guy?

THOMPSON: Leave it up to Philly to come up with a crazy mascot like that. Just those eyes. I don’t know, man. He haunts a lot of people’s dreams, I know that.

KADE: He’d be a great SNL actor, I think.

KADE: All the sudden, Gritty runs out, just hits him with his stomach.

THOMPSON: Yeah, and everything’s fine. Gritty, please, come to SNL. I’ll take care of you. It’s on me, trust me. Just have them call up, 'We got Gritty downstairs.' 'Oh yeah, send him up.'"

For what it’s worth, Gritty appearing on SNL might actually get me to watch the show.

Unsurprisingly, Gritty was very pleased with being mentioned by Thompson, though he got a bit carried away and said he’d been asked to *host* the show:

How Gritty would fare as a host is unclear, considering he doesn’t speak. It would probably be a bit of a mess, but it would ultimately be kind of great. You know, like Gritty.