Will Smith also wins for YouTube videe 'The Jump'; and Philly rapper Tierra Whack for artist of year for 'Whack World' 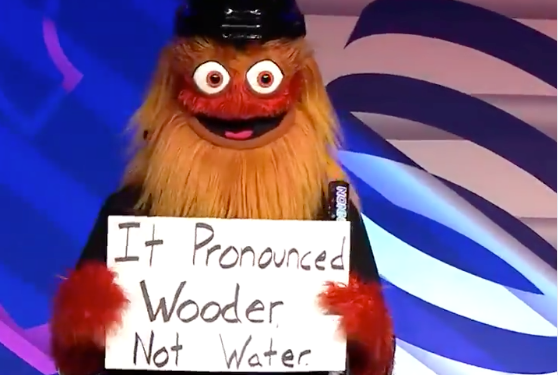 The Webby Awards are presented by the International Academy of Digital Arts and Sciences and recognize achievement on the internet in various categories, such as: websites, video, social media and podcasts.

Though all the Webby winners were announced last month, Monday night's ceremony was notable because those there to receive their awards in person are limited to five-word acceptance speeches.

Gritty won the People's Voice Award for Social in the athletes and sports teams. The Flyers mascot walked on stage to accept the award in a three-piece suit as the "Rocky" theme played. He squeaked the the squeakers in his furry hands and was handed a sign with his speech handwritten on it that read: "It pronounced wooder not water."

The video the acceptance speech was posted to Gritty's Twitter account Monday night with the caption, "I continue to amaze me."

But one of the highest honors of the evening went to Philly rapper Tierra Whack who won the Webby Artist of the Year award. It was only one of eight special achievement honors at the awards show.

Fellow Philly rapper Freeway presented Whack her award, calling "someone who really delivers the internet we want." He added, "'Whack World' isn't just visually and lyrically stunning, it also raises the bar for where and how art can be made in the digital age of social media."

.@Phillyfreezer presents the Webby Artist of the Year Award to @TierraWhack for her unique vision and her use of digital technology to blaze artistic trails. Hear her #5WordSpeech! #TierraWhack #Freeway #Webbys 🎚️🎚️🎶 pic.twitter.com/Tv97tBY87S

Will Smith won the Webby for Events and Live Streams for his YouTube broadcast of  "The Jump," which features The Fresh Prince bungee jumping off a helicopter at the Grand Canyon.

Other winners at last night's Webby Awards include Chance the Rapper, Childish Gambino, Kesha, Ellen DeGeneres and Ryan Reynolds. The award show was hosted by actress and comedian Jenny Slate. Many of the winners' acceptance speeches can be watched on the Webby Awards Instagram.